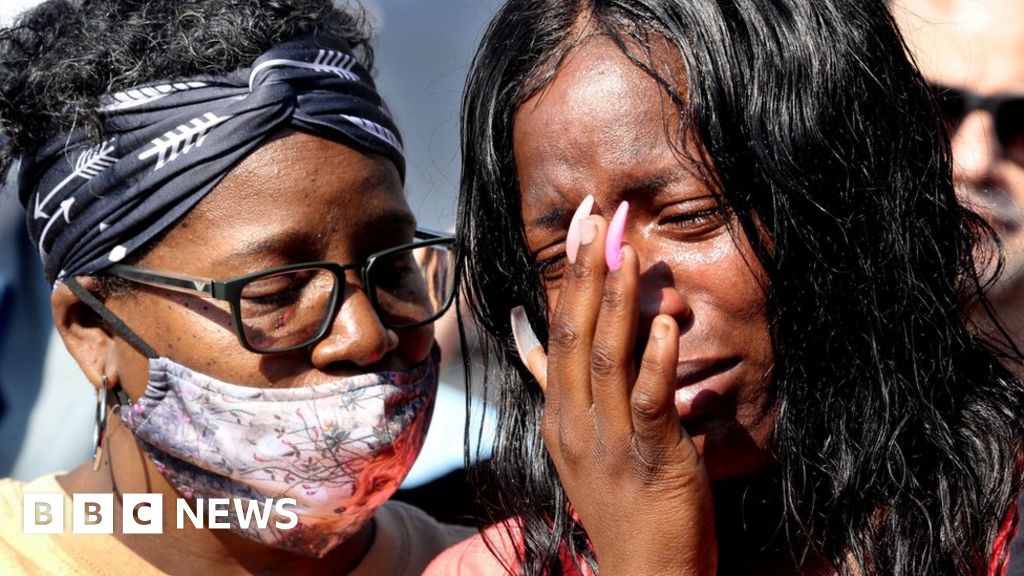 The man suspected of shooting dead 10 people at a supermarket in Buffalo, New York, deliberately sought a site with a high black population, authorities say.

The attack is being investigated as an act of racially motivated violent extremism.

Questions are being asked about how he was able to carry out the attack when he was already on the radar of authorities.

A 180-page document seemingly authored by Mr Gedron has emerged, in which he describes himself as a fascist and a white supremacist.

“I want to know what people knew and when they knew it,” New York Governor Kathy Hochul told ABC News.

“This event was committed by a sick, demented individual who was fuelled [by a] daily diet of hate,” she said.

The shooting has stunned the local community. One of those attending a vigil on Sunday said “it just hurts, why somebody would do that”, Reuters reported.

Of the 13 people shot, police said 11 were black. Among those reported killed were a man buying cupcakes for his son’s birthday and a woman who had gone shopping after visiting her husband at a nursing home.

An all too familiar pattern

The shooter in Buffalo, like ones before, live-streamed his violent rampage and left a so-called “manifesto” online. It details his extremist beliefs and is packed with cherry-picked statistics, conspiracy theories and internet memes.

The file contains reams of racist and anti-Semitic sludge along with straightforward admissions that the author is a fascist and a white supremacist.

If the author can be believed – as the document also clearly contains disinformation and pathetic attempts to trick reporters into reporting false stories – he was radicalized during early on during the Covid pandemic, on extremist websites and message boards such as 4chan.

Like after the 2019 mosque shootings in Christchurch, big social media companies will struggle to zap footage of the attack.

And surely the American debate over gun control will be reignited, however briefly.

But the underlying problem seems as intractable as ever: a worldwide network of young violent extremists, some of whom are motivated to launch deadly attacks against innocent people.

The attacker, dressed in military gear, drove into the car park at Tops Friendly Market in Buffalo at about 14:30 EST (19:30 BST) and began livestreaming the rampage.

A security guard fired several shots back but the gunman’s bulletproof vest stopped one that hit him, police said. He then killed the guard and stalked through the store firing at other people.

Mr Gendron was arrested after the attack and has pleaded not guilty to murder charges.

Witnesses described horrific scenes. “It’s like a nightmare… you see this on TV, you hear about it on TV… but I never thought I would be one of them,” said one.

“We must all work together to address the hate that remains a stain on the soul of America,” he said.

Saturday’s attack in Buffalo is thought to be the worst mass shooting so far in the US in 2022. Some 40,000 deaths a year involve firearms in America, a figure that includes suicides.