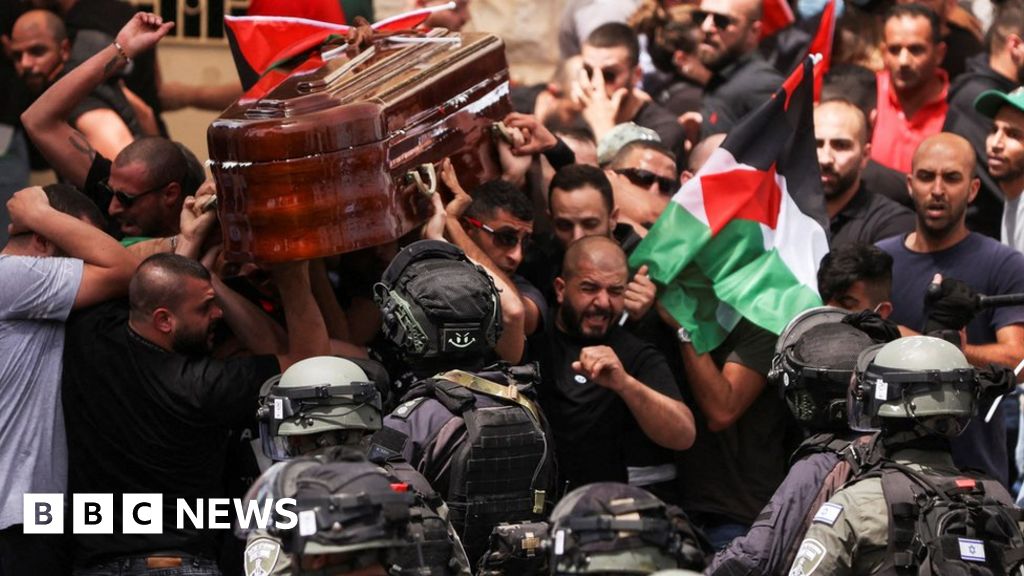 Israeli police have hit mourners at the funeral of Al Jazeera reporter Shireen Abu Aqla, whose killing in the occupied West Bank has caused a surge of anger.

Her coffin almost fell as police, some using batons, waded into a crowd of Palestinians gathered around it.

Police said they acted after being pelted with stones.

Abu Aqla was shot dead in disputed circumstances on Wednesday, with Israel and Palestinians trading blame. The killing has been widely condemned.

Footage showed a standoff between police and Palestinians gathered around the coffin in the hospital compound, before officers push the crowd back, with some beating and kicking mourners. Police said officers “were forced to use riot dispersal means”.

We were in the car park of St Joseph’s hospital, where hundreds of Palestinian mourners had gathered ready for Shireen Abu Aqla’s coffin to be carried out into a waiting hearse.

There was a shrine of written tributes, a floral crucifix (Shireen was a Palestinian Christian) and poignantly a press flak jacket among the flowers. Many were in tears. There was some chanting and Palestinian flags were being flown.

Suddenly the gates to the compound were closed and heavily armed Israeli border police, some on horseback, appeared on the other side of them. Given the circumstances it already felt confrontational.

The coffin was brought out of the building carried by a group of pallbearers. While the plan was for the procession to the church to use the hearse, the coffin was now being carried towards the closed gates.

What happened next was extraordinary. I was behind the packed crowd so I couldn’t see the front point of contact, but the Israeli police suddenly pushed back the crowd, including the coffin and its carriers.

They fired stun grenades towards the mourners and the press and were storming into the compound. From my vantage point – not at the front of the crowd – I saw a couple of plastic bottles being thrown back, nothing more. People ran to take cover inside the hospital. I saw a woman with a young baby in a carrier sling distraught, almost being crushed in the panic.

The echo of stun grenades rang out in the hospital corridors and wards. I saw at least one man wounded.

This seemed to go on for around 10 minutes, as we sought a safe route back towards the car park. After we came out, the coffin left in the hearse through the gates. And now videos have emerged showing what happened while people were rushing inside – Israeli police beating and kicking the pallbearers, who were in retreat carrying Shireen Abu Aqla’s coffin. At one stage it nearly slipped from their grasp, falling towards the ground.

A spokesman for UN Secretary General Antonio Guterres said he was “deeply disturbed” by the confrontations between Israeli security forces and Palestinians and the behaviour of some police.

“We regret the intrusion into what should have been a peaceful procession,” she said.

The Palestinian Authority and Al Jazeera claim Abu Aqla was shot dead by Israeli forces, while Israel said it was not yet possible to determine what happened and that she could have been killed by Palestinian gunfire.

An Israeli military interim report on Thursday said the fatal shot could have come from “massive fire from Palestinian gunmen”, or possibly from “a few bullets” fired by a soldier “at a terrorist who was firing at his vehicle”.

Shireen Abu Aqla, a 51-year-old Palestinian American, was a veteran correspondent for Al Jazeera’s Arabic news channel and had reported on the Israel-Palestinian conflict for two decades.

She was given the rarity of a funeral at the compound of Palestinian President Mahmoud Abbas on Thursday, where her coffin was brought draped in the Palestinian flag. President Abbas paid tribute to her, describing her as a “martyr of the free word” who “sacrificed her life” to defend the Palestinian cause.

He said Israel was “fully responsible for her killing” and that he would refer the case to the International Criminal Court, which investigates potential war crimes.

Abu Aqla was in the Jenin refugee camp early on Wednesday to report on the Israeli raid. The Israeli military said the operation was to apprehend “terrorist suspects”.

It said: “Tens of Palestinian gunmen fired at and hurled explosive devices toward the soldiers. The soldiers responded with fire toward the gunmen and hits were identified.”

Another Palestinian journalist, Al Jazeera producer Ali Samoudi, was shot and wounded during the violence.

The incident comes at a time of particularly high tension between Israel and the Palestinians, after nearly two months of one of the deadliest periods of violence in years. Israel has carried out operations in Jenin in the wake of a wave of killings of Israeli Jews by Palestinians and Israeli Arabs in Israel and the West Bank.

Four of the Palestinians who carried out attacks in Israel came from the Jenin district.

An Israeli police commando meanwhile was killed on Friday during clashes with Palestinian gunmen near Jenin, police said. The commando, who was 47, was shot dead during an operation to arrest a suspect, Israeli authorities said.