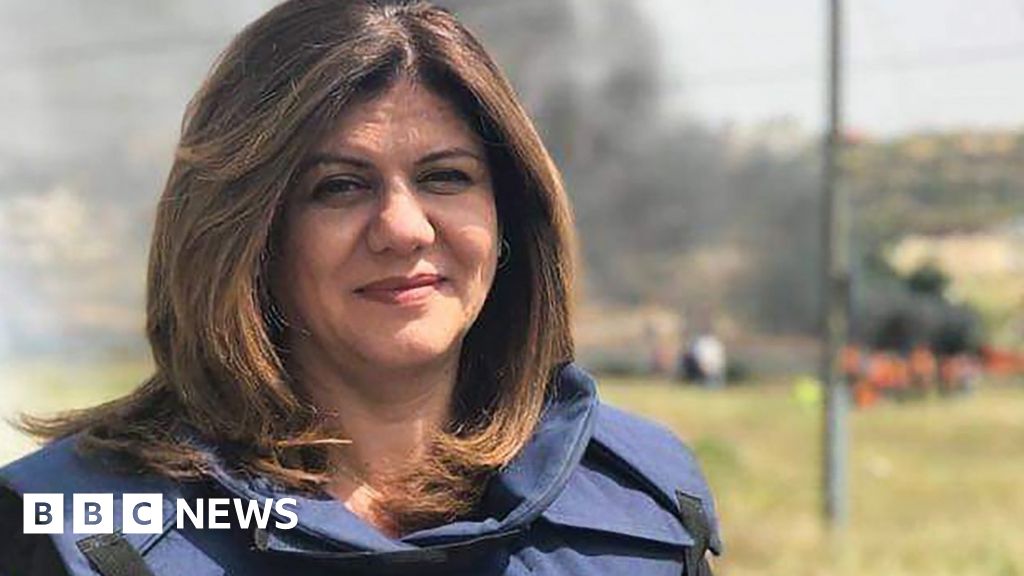 A veteran Palestinian-American correspondent for Al Jazeera has been killed while covering a raid by Israeli forces in the occupied West Bank.

The Qatar-based network said Shireen Abu Aqla was shot “deliberately” and “in cold blood” by Israeli troops in Jenin. Her producer was also wounded.

Israel’s prime minister said it was “likely” they were shot by Palestinian gunmen during an exchange of fire.

But his military chief said it was not yet able to determine what happened.

The Palestinian president said he held the Israeli government fully responsible for what he described as a “crime of execution”.

Early on Wednesday morning she went to the Jenin refugee camp to report on a raid by Israeli soldiers and security forces, which the Israeli military said was conducted to apprehend “terrorist suspects”.

“During the activity, tens of Palestinian gunmen fired at and hurled explosive devices toward the soldiers. The soldiers responded with fire toward the gunmen and hits were identified,” a military statement said.

The Palestinian health ministry said Abu Aqla was hit in the head by a live bullet during the raid. She was taken to hospital in a critical condition and later pronounced dead.

Another Palestinian journalist, Al Jazeera producer Ali Samoudi, was shot in the back and was in a stable condition in hospital, the health ministry added.

“We were going to film the Israeli army operation and suddenly they shot us without asking us to leave or stop filming,” Al Jazeera cited Mr Samoudi as saying. “The first bullet hit me and the second bullet hit Shireen.

“There was no Palestinian military resistance at all at the scene,” he added.

Video of the shooting showed Abu Aqla was wearing a blue flak jacket clearly marked with the word “press”, as well as a helmet.

Shireen Abu Aqla was a household name across the Arab world – literally.

Across the region and beyond, her calm commanding presence filled living rooms, courtyards, and camps.

Living in Jerusalem, I remember her in the scrums of journalists covering a conflict which rarely left the headlines. She was part of our tribe but, her authority and quiet confidence set her apart – her ready smile and infectious laugh drew many to her.

When a story mattered, she was there. Now she is not, and, for so many, a big part of every story she faithfully covered will be missing.

But she has only one title which she earned throughout her life – journalist.

The network called on the international community to hold the Israeli government and military accountable for the “intentional targeting and killing” of a journalist.

Qatar – which funds Al Jazeera – said it considered the killing a “heinous crime and a flagrant violation of international humanitarian law and a blatant infringement on freedom of media and expression”.

Palestinian Authority President Mahmoud Abbas condemned the shooting of Abu Aqla and Samoudi and alleged that it was “part of the occupation’s policy of targeting journalists to obscure the truth and commit crimes silently”.

“According to the information we have gathered, it appears likely that armed Palestinians – who were firing indiscriminately at the time – were responsible for the unfortunate death of the journalist,” he said in a statement.

“Palestinians in Jenin were even filmed boasting: ‘We hit a soldier; he’s lying on the ground.’ However, no [Israeli] soldier was injured, which increases the possibility that Palestinian terrorists were the ones who shot the journalist.”

Israel’s foreign ministry and the Israeli military tweeted a video showing a Palestinian gunman firing down an alleyway in the Jenin camp.

However, Israeli human rights group B’Tselem later said its researchers in Jenin had concluded that the Palestinian gunfire seen in that video could not possibly have been the gunfire that hit Abu Aqla and Samoudi.

In response, the Israeli foreign ministry stressed that “there was no claim that the gunfire in the clip killed” Abu Aqla.

Israeli military chief Lt Gen Aviv Kohavi meanwhile issued a statement saying: “At this stage, it is not possible to determine whose shooting she was hit by and we are sorry for her death.”

Mr Bennett also said Israel had called on the Palestinian Authority to conduct a joint post mortem and investigation in order to get to the truth. He claimed that Palestinian officials had so far refused the offer, but a Palestinian minister said there had been no contact from Israel about a joint probe.

US state department spokesman Ned Price said it was “heartbroken by and strongly condemn the killing” of Abu Aqla.

“The investigation must be immediate and thorough and those responsible must be held accountable. Her death is an affront to media freedom everywhere.”

Abu Aqla joined Al Jazeera in 1997 and was one of its first field correspondents. She was one of the best known women to become a regular face on TV screens covering the Israeli-Palestinian conflict over the years.

Her colleague Nida Ibrahim said she was “very well respected” and that the news was “a shock to the journalists who have been working with her”.

The Palestinian ambassador to the UK, Husam Zomlot, told the BBC’s Newsday programme that she was a very close friend.

“She was a household [name] in Palestine, in the region and worldwide for being who she was – a prominent journalist who spent her life covering news, covering Israeli brutality in Palestine,” he said.

The Israeli military frequently launches arrest raids into Jenin refugee camp. They have stepped up recently following a wave of attacks by Israeli Arabs and Palestinians on the streets of Israel and the West Bank in recent weeks that has left 17 Israelis and two Ukrainians dead.

At least 26 Palestinians have been killed – including assailants shot dead while carrying out attacks, or militants and civilians killed during Israeli raids and confrontations in the West Bank.

Israeli operations have centred on the Jenin district, where four of the Palestinians who carried out attacks in Israel came from.

Cyclone Ian batters South Carolina in second US landfall
Hurricane Ian: They stayed for the storm – what happens now?
Olivia Pratt-Korbel: Man charged with schoolgirl’s murder
Iran protests: Supreme leader blames unrest on US and Israel
Climb down or stand firm – what does Truss do next?