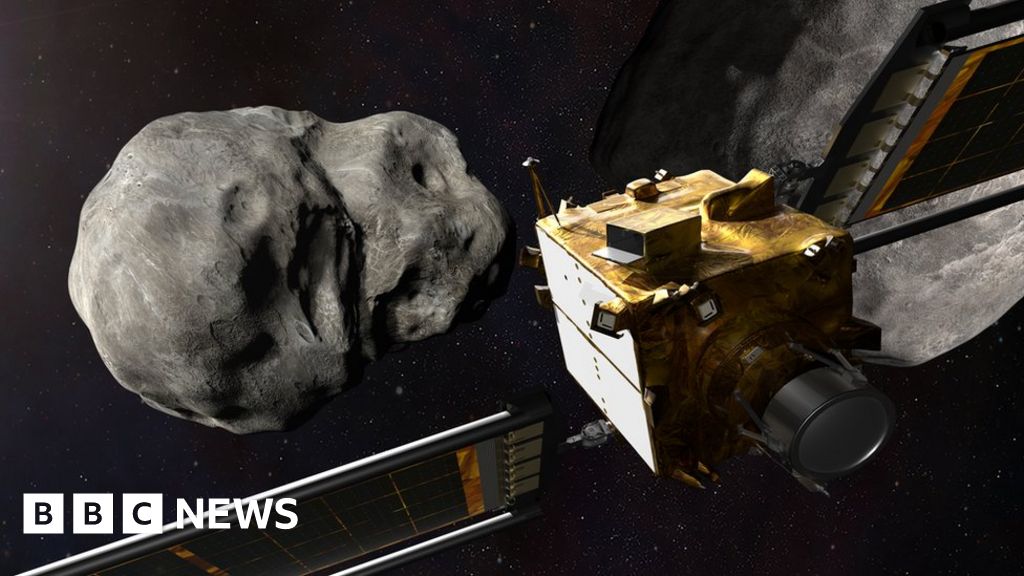 A spacecraft has launched on a mission to test technology that could one day tip a dangerous asteroid off course.

The spacecraft will crash into an object called Dimorphos to see how much its speed and path can be altered.

If a chunk of cosmic debris measuring a few hundred metres across were to collide with our planet, it could unleash continent-wide devastation.

A Falcon 9 rocket carrying the Dart spacecraft blasted off at 06:20 GMT on Wednesday from Vandenberg Space Force Base in California.

It is the first attempt to deflect an asteroid for the purpose of learning how to protect Earth, though this particular asteroid presents no threat.

“Dart will only be changing the period of the orbit of Dimorphos by a tiny amount. And really that’s all that’s needed in the event that an asteroid is discovered well ahead of time,” said Kelly Fast, from Nasa’s planetary defense co-ordination office.

Commenting on the launch, she said: “We’re not out of the woods yet, we’ve got to get out to Dimorphos, but this is a huge step along the way.”

Asteroids are the left-over building blocks of the Solar System. In the extremely rare event that a space rock’s path around the Sun crosses that of Earth so that the two objects intersect at the same time, a collision may occur.

The $325m (£240m) Dart mission will target a pair of asteroids that closely orbit each other – known as a binary. The larger of the two objects, called Didymos, measures around 780m across, while its smaller companion – Dimorphos – is around 160m wide.

Objects of Dimorphos’ size could explode with many times the energy of a typical nuclear bomb, devastating populated areas and causing tens of thousands of casualties. Asteroids with a diameter 300m and larger could cause continent-wide destruction, while those bigger than 1km would produce worldwide effects.

After escaping Earth’s gravity, Dart will follow its own orbit around the Sun. It will then intercept the binary as it approaches within 6.7 million miles of Earth in September 2022.

Dart will smash into the “moonlet” Dimorphos at a speed of around 15,000mph (6.6 km/s). This should change the speed of the object by a fraction of a millimetre per second – in turn altering its orbit around Didymos. It’s a very small shift, but it could be just enough to knock an object off a collision course with Earth.

In 2005, Congress directed Nasa to discover and track 90% of near-Earth asteroids larger than 140m (460ft). No known asteroids in this category pose an immediate threat to Earth, but only an estimated 40% of those objects have actually been found.

Dart is carrying a camera called Draco that will provide images of both asteroids and help the spacecraft point itself in the correct direction to collide with Dimorphos.

About 10 days before Dart hits its target, the American spacecraft will deploy a small, Italian-built satellite called LiciaCube. The smaller craft will send back images of the impact, the plume of debris kicked up and the resulting crater.

The tiny change in Dimorphos’ path around Didymos will be measured by telescopes on Earth. Tom Statler commented: “What we really want to know is: did we really deflect the asteroid and how efficiently did we do it?”

A binary is the perfect natural laboratory for such a test. The impact should change Dimorphos’ orbit around Didymos by roughly 1%, a change that can be detected by ground telescopes in weeks or months.

However, if Dart were to slam into a lone asteroid, its orbital period around the Sun would change by about 0.000006%, which would take many years to measure.

The binary is so small that, to even the most powerful telescopes, it appears as a single point of light. However, Dimorphos blocks some of Didymos’ reflected light as it passes in front, while the opposite occurs when the smaller object moves behind its bigger companion.

“We can measure the frequency of those dimmings,” explained Dart’s investigation lead Andy Rivkin, adding: “That’s how we know that Dimorphos goes around Didymos with a period of 11 hours, 55 minutes.”

There’s a degree of uncertainty over how Dimorphos will respond to the impact, in part because its interior structure isn’t known. If Dimorphos is relatively solid inside, rather than full of spaces, it might produce lots of debris – which would give the object an extra push.

Dart’s method for dealing with a hazardous asteroid is known as the kinetic impactor technique. However, there are other ideas, including moving the asteroid more slowly over time and even detonating a nuclear bomb – an option familiar from Hollywood movies such as Armageddon and Deep Impact.