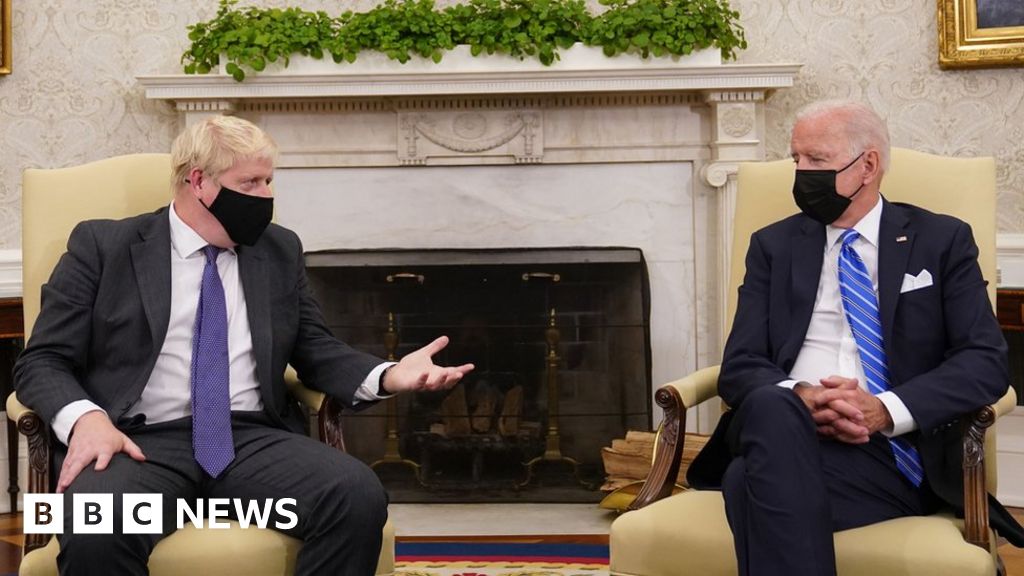 Joe Biden has downplayed the chances of brokering a post-Brexit free trade deal with the UK, as he held talks with Boris Johnson at the White House.

Downing Street said its priority was still getting a deal with the US alone.

But the BBC understands that UK ministers are now considering joining an existing North American trade pact instead of pursuing a separate deal.

The UK and US leaders also discussed Afghanistan, security and climate change during the 90-minute meeting.

Speaking to reporters in the Oval Office before the meeting, Mr Biden said the pair would discuss trade “a little bit”, adding: “We’re going to have to work that through”.

Mr Johnson earlier downplayed the chances of securing a trade deal with the US before the next general election.

But during a joint appearance Vice President Kamala Harris, he told reporters there had been “real progress” on UK-US talks.

A source familiar with the government’s thinking suggested to the BBC’s Laura Kuenssberg that the UK could negotiate entry into an existing trade arrangement between the US, Canada and Mexico – known as the USMCA – set up after former US President Donald Trump tore up its predecessor, NAFTA.

“There are a variety of different ways to do this,” the source said.

“The question is whether the US administration is ready. The ball is in the US’s court. It takes two to tango.”

Mr Johnson and Mr Biden said all diplomatic and humanitarian methods must be used to stop conditions getting worse in Afghanistan.

Officials said they agreed that any international recognition of the Taliban must be contingent on the group respecting human rights.

Mr Biden also issued a fresh warning to the UK that peace in Northern Ireland must not be jeopardised as a result of the complications caused by Brexit – although a Downing Street source has said the issue was not raised in their private discussions.

Mr Biden made it clear he has concerns about the Irish border, a point of tension between the White House, and No 10, amid continuing issues with Northern Ireland Protocol – the post-Brexit trade arrangements involving Northern Ireland.

“On the protocols, I feel very strongly about those. We spent an enormous amount of time and effort, in the United States, it was a major bipartisan effort made.”

Mr Johnson said “that’s absolutely right”, adding: “On that point, Joe, we’re completely at one, nobody wants to see anything that interrupts or unbalances the Belfast/Good Friday Agreement.”

The meeting between Mr Johnson and Mr Biden is the second time they have met in person, with the first being at the G7 summit in Cornwall earlier this year.

And it comes ahead of a third face-to-face meeting in Glasgow for the COP26 climate summit in November.

The event, which will see global leaders gather to discuss the issue, is seen as a crucial moment to bring climate change under control.

Earlier, Mr Biden announced the US would double its climate finance pledge and increase funding for developing countries to $11.4bn (£8.3bn) by 2024.

Mr Johnson said the US had “stepped up to the plate” with what he called a “massive contribution” towards the $100bn goal for countries to raise.