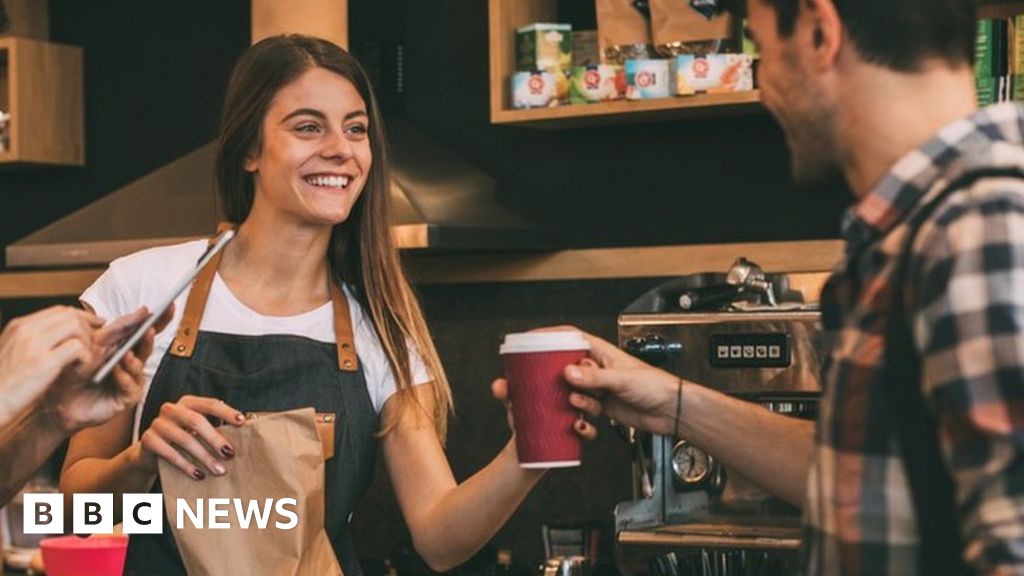 The number of people on furlough has fallen sharply, with young people moving off the government scheme fastest, new figures show.

At the end of June, 1.9 million people were still on furlough, the lowest level since the start of the pandemic and half a million fewer than in May.

In the last three months, younger people came off furlough twice as fast as all other age brackets.

At the same time, more than a million people in hospitality and retail have left the scheme.

At the peak of the pandemic in May last year, nearly nine million people were on furlough.

The wage support scheme has been extended several times, but will end on 30 September.

Lucy Walker-Evans from Chepstow was working as an account manager for a global hotel chain when she was put on furlough in March last year.

The 45-year-old spent the next nine months on paid leave, a time she found harrowing at first.

“It felt like you were skiving off work, you kept waiting for the phone to ring, constantly felt guilty,” she told the BBC.

“There was lots of crying, lots of worry, lots of uncertainty.”

In January, she was made redundant, but the time off had given her a chance to take stock.

She realised she wanted a less stressful job and to work in charity, and by February she had managed to find a role working at a local shelter for young homeless people – a job she loves.

“Had I not been furloughed, I would never have had time to think about my career, so it was a transformational experience really,” she told the BBC.

“I also had a year to learn to live on a lower salary – you realise you don’t always need to chase the next pay rise.”

Jo Shippen, managing director of Hatters Promotions, a promotional merchandise and print company in Stockport, said the furlough scheme had been a “godsend” for her business and staff.

“Without the furlough scheme, I would have to have let people go, I just would not have managed,” she said.

Hatters was able to continue operating during the lockdowns, but it “pivoted” away from events and conferences to supplying products for companies looking to improve staff engagement.

Ms Shippen said she had been “really lucky” that her staff were “understanding” about being furloughed.

Under the Coronavirus Job Retention Scheme (CJRS), known as furlough, staff receive 80% of their current salary, capped at £2,500 a month.

Furlough will be wound down further from Sunday as the government asks firms to make a bigger contribution.

Since 1 July, employers have been asked to contribute 10% towards the wages of furloughed workers for hours their staff do not work.

That amount will rise to to 20% in August and September.

The scheme, drawn up after lengthy talks with business groups and union leaders, has cost taxpayers almost £50bn to date, arousing fears taxes will have to rise to pay for it.

Since the start of the scheme, a cumulative total of 11.6 million jobs have been supported by the CJRS at various times.

It is credited with stopping a spike in unemployment and some fear jobs will be lost when it ends.

But according to Tony Wilson, director of the Institute of Employment Studies, the number of people on furlough has been “dropping like a stone” as industries start to reopen, while fears of a “rush of redundancies” have been unfounded.

“Either employees are being brought back to work by their employers or they are being taken off furlough and leaving the labour market,” Mr Wilson told the BBC.

“That could be young people going into full-time education rather than seeking work.”

However, he noted some industries would be more exposed than others when the scheme finally ends, while support jobs such as office cleaning, security and delivery could also be lost if workers do not go back to the office in the same numbers because of the rise in home working.

“The answer is not extending furlough, but re-skilling people to take up the record number of new vacancies being advertised,” Mr Wilson said.

The top five industry groups with the highest rates of jobs being put on furlough at 31 May 2021:

Tom Waters, senior research economist at the Institute for Fiscal Studies, said there was “no way to know exactly” how many jobs would have been lost, and for how long, had the furlough scheme not existed.

“But given that unemployment has only risen slightly since the start of the pandemic, despite the biggest fall in GDP ever recorded, I think it’s fair to say that furlough has had a very significant impact on job retention,” he added.

The Trades Union Congress said it was “great” so many people had been able to return to work from furlough, but added some firms still required it.

“Doubling the employer contribution is too much too soon, putting jobs at risk in some parts of the economy,” said Frances O’Grady, the union’s general secretary.

Laura Kearsley, head of employment law at Nelsons Solicitors, believes a lot of employers will review their workforce in the light of the furlough support being removed. She thinks that might result in an uptick in redundancies.

“I think we will see a lot of employers trying to agree measures that keep people in a job, such as reductions in pay or reductions in hours, changes in operating models,” she said.

She had this advice for those fearing redundancy: “Find out about your rights. Dig out your employment contract, whatever you signed when you joined.

“Also ask for a company handbook or policy information about redundancy, that should set out what you can expect if you do find yourself in that situation.”

Are you currently on furlough? Are you an employer with staff on furlough? Share your experiences by emailing haveyoursay@bbc.co.uk.