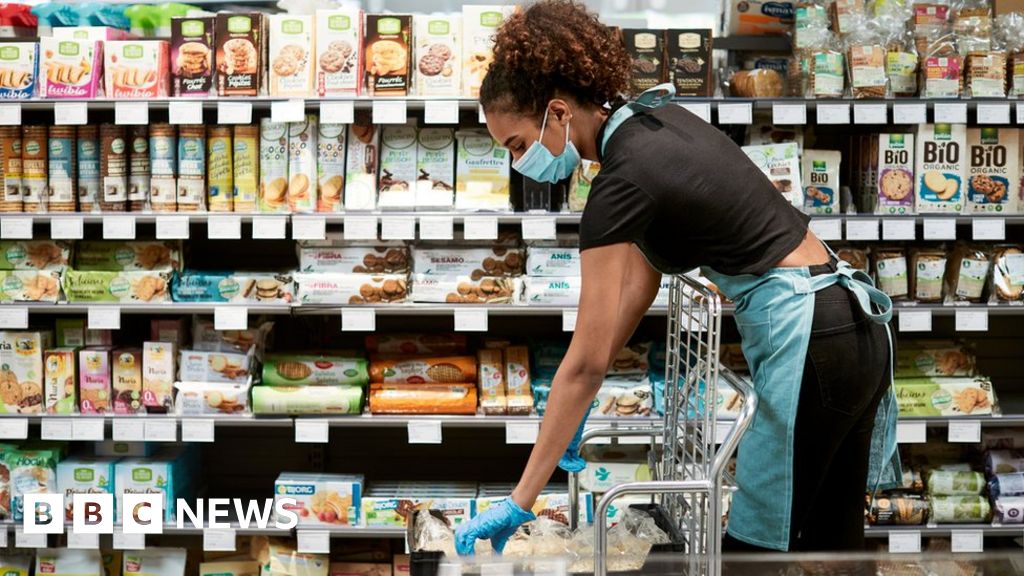 Shops are facing increasing pressure as they try to keep shelves stocked, with rising numbers of staff self-isolating, the British Retail Consortium has said.

It said ministers needed to “act fast” and allow fully vaccinated retail workers or those who had tested negative for Covid to go to work.

The government says it is crucial people isolate when asked do so to stop the spread of the virus.

Many of Thursday’s newspaper front pages carried pictures of empty shelves in some supermarket branches – with some describing panic buying of certain items – but industry sources told the BBC that so far food shortages were not a systemic problem.

Andrew Opie, director of food and sustainability at the British Retail Consortium, said the increasing number of workers being told to isolate by the NHS Covid App was “putting increasing pressure on retailers’ ability to maintain opening hours and keep shelves stocked”,

He called for retail staff and suppliers to be allowed to go to work if they are double vaccinated or test negative for Covid “to ensure there is no disruption to the public’s ability to get food and other goods”.

“With community cases soaring, the number of healthy retail staff having to self-isolate is rising fast, disrupting retail operations,” he added.

Mr Opie said a fall in the number of available HGV drivers, exacerbated by the rising numbers being forced to isolate, was also “resulting in minor disruption to some supply chains”.

Supermarket chain Iceland said around 1,000 employees – almost 4% of its staff – were currently absent for Covid-related reasons, with the north of England most affected.

Of these, 27% have tested positive for Covid, while 64% have been “pinged” by the NHS Covid App and told to isolate.

As a result the company has been forced to reduce opening hours and temporarily close its Bedford and Trafford stores.

Meanwhile, the British Meat Processor’s Association said some members were seeing between 5% and 10% of their workforce “pinged” by the app.

It said the shortage of workers affected products that needed more labour to produce, meaning those lines would be cut first.

Staff shortages due to isolation rules have impacted sectors including hospitality, transport and the NHS.

On Wednesday, BP said lorry driver shortages and isolating staff had caused fuel supply issues at some of its petrol stations.

The oil firm said shortages of unleaded petrol and diesel had seen a “handful” of its UK sites close temporarily.

Dozens of councils across England have also been forced to suspend bin collections due to staff self-isolating.

Earlier this week, the government announced a “small number” of fully vaccinated critical workers, including health and care staff, would be allowed to continue to do their job even if they were a close contact of someone who had tested positive for Covid.

But the prime minister has said he does not want to extend the exemption too widely in order to limit the spread of the virus.

The government has argued it is necessary to keep isolation rules largely unchanged until 16 August.

From that date, people who are fully vaccinated and under-18s will be able to avoid self-isolating by taking daily Covid tests.

Under current self-isolation rules in England, anyone who is traced as a close contact of a confirmed positive case must isolate for 10 days, whether or not they have received both doses of a vaccine.

If someone is told to isolate by NHS Test and Trace they are legally obliged to do so.

But if someone is “pinged” by the NHS Covid app the requirement to self-isolate is only advisory.