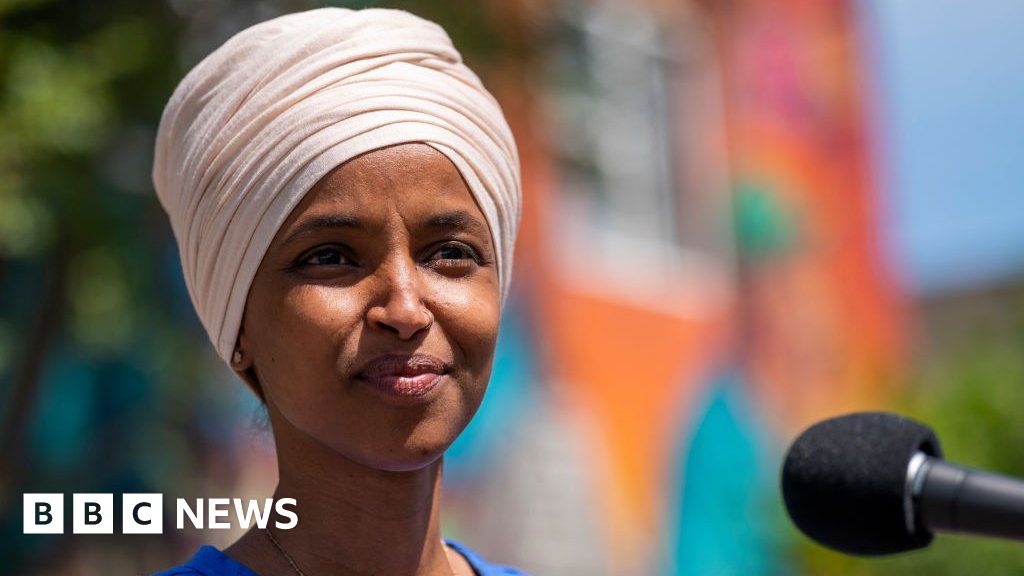 A US congresswoman has hit back after a rare rebuke from Democratic colleagues over her remarks seeming to liken the US and Israel to Hamas and the Taliban.

A dozen Jewish lawmakers called on Ilhan Omar to “clarify her words”, but the Minnesota representative slammed the group’s “tropes”.

This is not the first time that Ms Omar’s criticism of Israel put her at odds with members of her own party.

In 2019, she apologised for implying money was behind support for Israel.

On Monday, Ms Omar tweeted that “we have seen unthinkable atrocities committed by the US, Hamas, Israel, Afghanistan, and the Taliban”.

“We must have the same level of accountability and justice for all victims of crimes against humanity,” she wrote, including a video of her questioning Secretary of State Anthony Blinken during a committee hearing in the House of Representatives.

The row comes only weeks after hostilities in the Middle East ended in ceasefire and amid rising reports of anti-Semitic attacks against American Jews.

But Ms Omar’s mention of militant Islamist groups Hamas and the Taliban in the same breath as the US and Israel rankled some of her fellow Democrats.

“Equating the United States and Israel to Hamas and the Taliban is as offensive as it is misguided,” wrote the group, led by New York Democrat Jerry Nadler, in a statement on Wednesday.

“Ignoring the differences between democracies governed by the rule of law and contemptible organizations that engage in terrorism at best discredits one’s intended argument and at worst reflects deep-seated prejudice.

“False equivalencies give cover to terrorist groups,” they added.

Early on Thursday, Ms Omar – a Somali-born former refugee who is one of the first Muslims elected to Congress – hit back at the group calling them “shameful” and accusing them of engaging in “islamophobic tropes”.

“It’s shameful for colleagues who call me when they need my support to now put out a statement asking for ‘clarification’ and not just call,” she tweeted.

“The islamophobic tropes in this statement are offensive. The constant harassment & silencing from the signers of this letter is unbearable.”

Her fellow member of the so-called “Squad” of left-wing Democratic female lawmakers, Alexandria Ocasio-Cortez, rushed to her defence.

“Pretty sick & tired of the constant vilification, intentional mischaracterization, and public targeting of @IlhanMN coming from our caucus,” the New York Democrat tweeted.

“They have no concept for the danger they put her in by skipping private conversations & leaping to fueling targeted news cycles around her.”

Later on Thursday, Ms Omar issued a statement saying that she was intending to question Mr Blinken about specific incidents presented to the International Criminal Court (ICC).

Ilhan Omar has proven to be a recurring headache for Democratic congressional leadership. While there may be elected officials in the party who agree with her sentiments regarding Israel’s actions, the bluntness of her comments are largely unwelcome.

Throw in that she seemingly equated not only Israel but the US with the Taliban as committers of “unthinkable atrocities”, and a quick rebuke was inevitable.

While Ms Omar subsequently clarified that she was only referring to specific International Criminal Court cases, her past sweeping condemnations have lost her the benefit of the doubt for many in her party.

Democratic views on Israel and the Palestinians have shifted dramatically over recent years, with sympathy moving to the latter at the expense of the former. There still is a substantial constituency within the party that supports Israeli policies, however, and their continued backing is essential to long-term Democratic electoral success.

Criticisms of Israel can be abided, but there is a line that cannot be crossed – and Omar once highlighted its existence.

“To be clear: the conversation was about accountability for specific incidents regarding those ICC cases, not a moral comparison between Hamas and the Taliban and the US and Israel,” she said.

“I was in no way equating terrorist organisations with democratic countries with well-established judicial systems.”

She also tweeted a profanity-laced voicemail message she said she had received, writing, “every time I speak out on human rights I am inundated with death threats”.

House of Representatives Speaker Nancy Pelosi issued a rare joint statement with leaders of the chamber’s committees seeking to quell the party unrest.

“We welcome the clarification by Congresswoman Omar that there is no moral equivalency between the US and Israel and Hamas and the Taliban,” wrote the group of senior Democrats.

Ms Omar’s original comment drew comparisons to a remark by former President Donald Trump in 2017 when he was asked on Fox News about his “respect” for Russian President Vladimir Putin, whom the host called “a killer”.