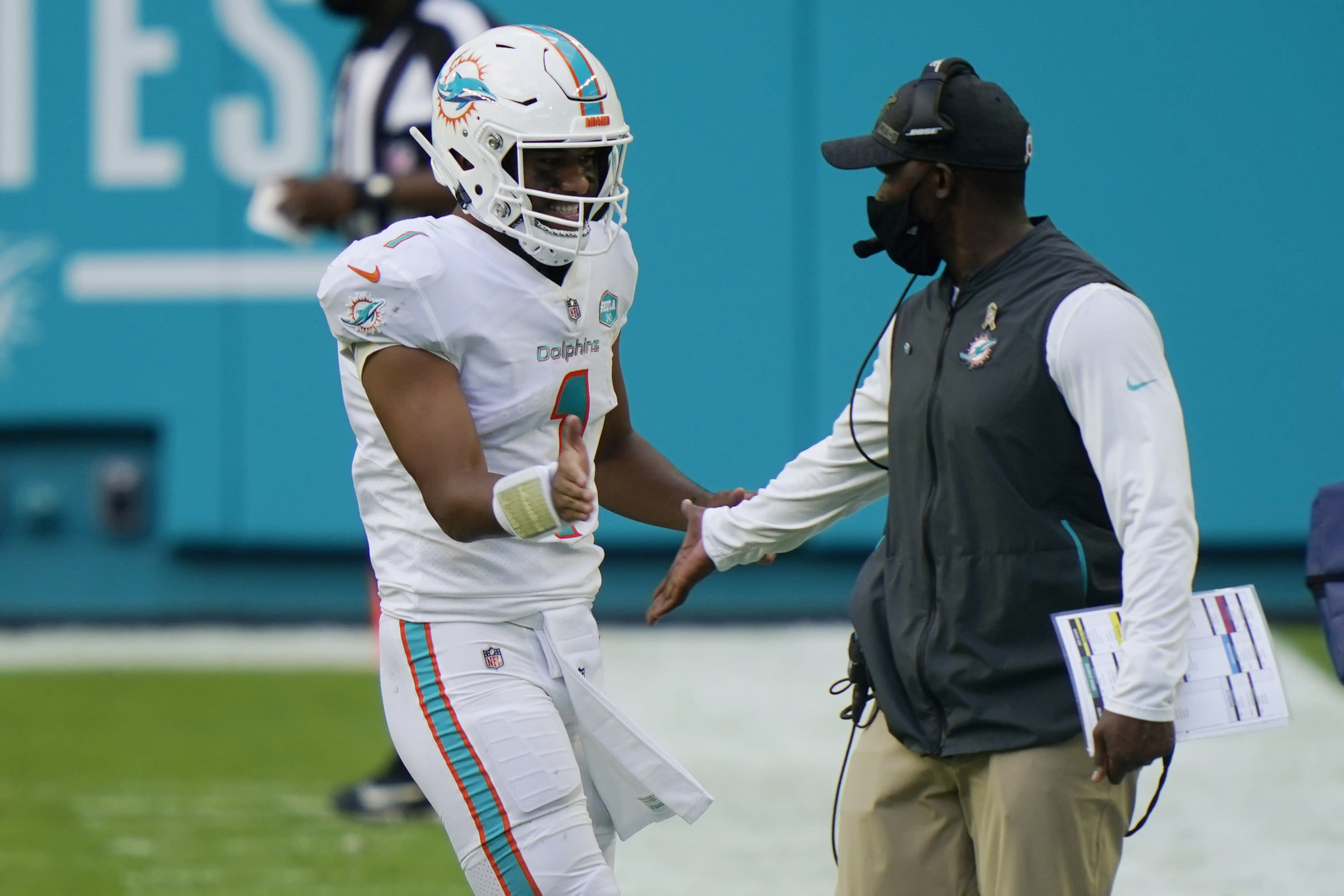 As far as first impressions go, Tua Tagovailoa’s NFL debut Sunday was no masterpiece for the Miami Dolphins.

Hell, even Tagovailoa himself will tell you that.

“I don’t think I played to the standard of what this offense is capable of,” the rookie quarterback said following the Dolphins’ 28-17 home win over the favored Los Angeles Rams. “Thank God we’ve got a good defense.”

Tagovailoa said this with a chuckle, clearly upbeat, even after an uneven debut that saw him complete 12 of 22 passes for 93 yards and a touchdown, with a lost fumble.

Miami will soon be a problem for the rest of the NFL. Dolphins coach Brian Flores’ postgame comments offer a glimpse why.

“It’s a team football game, I can’t stress that enough,” Flores said when asked to evaluate Tagovailoa’s performance. “It’s not a one-man show. I think he made enough plays for us to win the ballgame.”

While Tua’s debut dominated the headlines, I want to point out that the Dolphins are beginning to look like a good team. I know it’s easy to be cynical. Miami hasn’t won a Super Bowl since the 1973 season, and it has only one winning season since 2008. But the Dolphins have won their past three games, outscoring the Rams, New York Jets and San Francisco 49ers by a combined 61 points. After dropping their season opener to a disappointing and now 2-5 New England team, their other losses came to Buffalo (6-2) and Seattle (6-1) by a combined 11 points.

Those are pretty respectable outings, and now, the Dolphins (4-3) find themselves firmly in the AFC playoff mix. The Dolphins aren’t good enough to win a game this postseason, let alone make the Super Bowl, but it’s here where we must take a moment to appreciate second-year Dolphins coach Brian Flores, who is proving to be one of the most promising head coaches in football.

Flores and general manager Chris Grier have been impressive in turning around a woeful team in under 18 months. From a roster-building standpoint, there is developing young talent on the roster at key positions that have been deficient in Miami for years, including quarterback (duh), o-line and d-line. The Dolphins also have 10 picks to play with in the 2021 NFL draft, including two juicy first- and second-round selections from a 1-6 Houston team, so more premium talent is on the way.

From an on-field standpoint, the Dolphins play hard every week and are well-coached. You could even see glimpses of it last year in Flores’ first campaign as head coach, when the Dolphins went 5-11 but grew increasingly competitive as the season went on.

“It starts up top because ‘Coach Flo’ does a good job of setting the mindset for the team — for the organization — and we all just kind of take on that personality,” said defensive tackle Christian Wilkins, who had an interception Sunday. “We just all have the mindset to get better each week, get better each day.”

Because the Dolphins are young, the road to competing with the Kansas Citys, Baltimores and Pittsburghs of the world for AFC supremacy will start in 2022 for Miami, with 2021 being a playoff season where they learn how to compete with those teams.

As for 2020, the Dolphins will be a pain in the rear for everyone they play, even if Tagovailoa’s struggles Sunday continue as he acclimates to the speed of NFL games.

Don’t expect that to happen to the No. 5 overall pick in the draft. He is by all accounts a quick study, quick processor and accurate thrower, all things a quarterback needs to be competent on an NFL field quickly. Plus, teammates are saying the right things about him as a leader, which you love to see.

“He’s a good kid, he does right,” Dolphins safety Bobby McCain said. “He’s going to be a really good leader for us and he has been, and he’ll keep improving.”

Glimpses of that talent appeared Sunday. I liked the accuracy and pace he threw with on the run a few times, and his first career touchdown throw — a sharp 3-yard slant to DeVante Parker — was a nice strike under pressure.

Despite his middling stat line, Tagovailoa generally did a nice job protecting the football and avoiding turnover-worthy plays, aside from his terrible first play from scrimmage when he fumbled after being smashed and sacked, leading directly to a Rams score.

“I tried to step up, make a throw, Aaron Donald swiped at the ball behind me, and I don’t know who the guy was that took me off my feet and pretty much body-slammed me, but hey, that’s football,” Tagovailoa said. “I’m not going to lie, I did enjoy getting hit that first time. That was definitely a welcome.”

This response is further evidence of Tua’s upbeat, optimistic nature that was widely considered a plus by NFL teams during the pre-draft process. Eventually, Tagovailoa’s on-field play will catch up to his immense talent, and when that happens, the Dolphins may indeed have a transformational figure at the league’s most important position.

Until then, Flores will be able to keep the Dolphins in the playoff mix by protecting his young quarterback with a smart, fast defense that can make pocket quarterbacks like Jared Goff look really bad.

Flores got to Goff on Sunday with a dizzying array of overload blitzes and simulated pressures, just like he did in the 2018 Super Bowl, when he was the defensive coordinator of that Patriots team that toppled the Rams. As such, Goff alternated between letting the pressure affect him (which led to two interceptions) or not seeing it at all (which led to two lost fumbles), as he was hit eight times and sacked twice.

For a Dolphins team with a young quarterback making his first NFL start, it was exactly what the doctor ordered, a key ingredient to the type of team win that an organization with one of the most promising futures in pro football hopes to repeat for the next decade, albeit with better play from their still-maturing offense and a 22-year-old quarterback with star potential.

“Again, I don’t know how many different ways I can say this, it’s a team game, we’re going to pick each other up,” Flores said of Tagovailoa. “Tua is going to pick us up at some point.”

UK must prepare for more economic shocks, says TUC
Afghanistan’s singers flee Taliban violence
Covid: Which countries are vaccinating children and why?
Emma Raducanu on being US Open champ, the Queen and chocolate
Afghanistan: Taliban leaders in bust-up at presidential palace, sources say