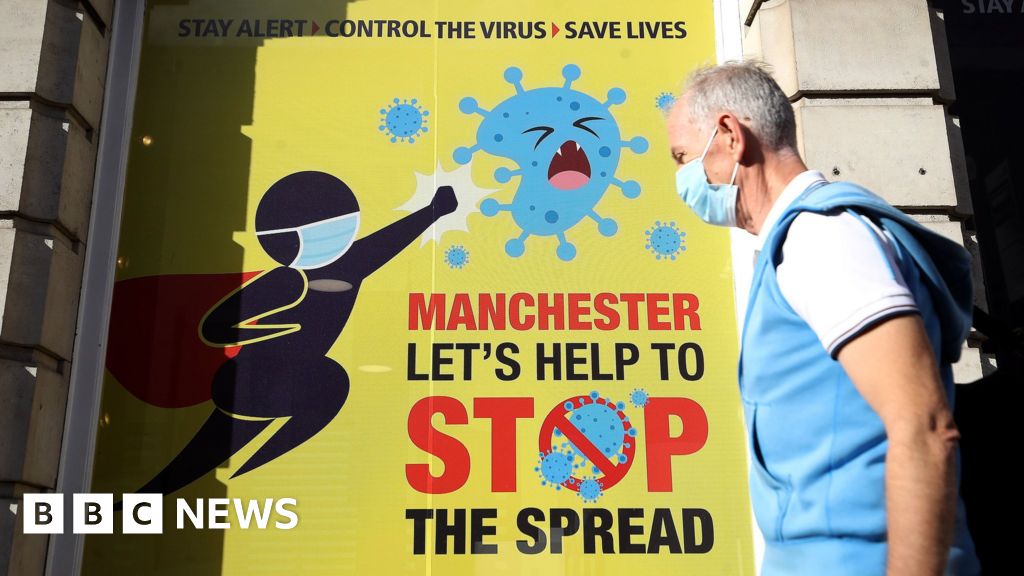 Health Secretary Matt Hancock has said a £60m offer to help Greater Manchester deal with the toughest Covid restrictions “remains on the table”.

The area will get £22m to help enforce the “tier three” rules that begin in the area on Friday.

Mr Hancock said the “door is open” to more talks on a £60m package to support businesses and employees – but local leaders want at least £65m.

The 2.8 million people in Greater Manchester are the first to be forced into tier three, England’s highest level, against the wishes of local leaders.

Mr Hancock said “the deal on the table that the mayor of Greater Manchester walked away from” – which was £60m – was “a fair deal”.

But on Tuesday Mr Burnham claimed the offer was too low, saying: “I don’t think it is right to ask people to go into a lockdown… without supporting them through all of that.”

Six Tory MPs have written to Mr Burnham accusing him of putting his “ego” above the people of Greater Manchester, suggesting the mayor should not be involved in future talks with government.

Meanwhile, negotiations will continue on Wednesday over whether South Yorkshire will be next to move into the tier three restrictions.

Under tier three, pubs and bars which do not serve substantial meals have to close, and there are further restrictions on households mixing.

The government’s three-tier strategy of regional measures is designed to avoid a national lockdown.

What was the result of the Greater Manchester talks?

After ten days of talks, Prime Minister Boris Johnson said with “regret” he would impose the tier three restrictions on Greater Manchester without local leaders’ agreement.

As well as shutting many pubs and bars, the restrictions mean betting shops, casinos, bingo halls, adult gaming centres and soft play areas will also have to close, while there is guidance against travelling in or out of the area.

The prime minister said the region would receive £22m as part of a “comprehensive package of support” for enforcement measures and the local test and trace work.

On Tuesday evening, Mr Hancock told MPs that a separate sum of £60m was “proportionate” to what the other areas in tier three had been given, and that it was still available.

Local politicians in Greater Manchester originally submitted a request for £90m but lowered their demand to £65m – a figure described by Mr Burnham as the “bare minimum”.

What was the reaction?

Mr Burnham accused the government of “playing poker” with people’s lives through the negotiations.

“This is a national crisis and we won’t defeat this virus on the cheap,” he added.

Meanwhile, Chris Green, the Conservative MP for Bolton West, said his constituency in Greater Manchester had been in local, tougher measures than tier three and claimed they “didn’t work”.

“The government believes that three weeks of closing pubs and soft play centres will make a dramatic difference,” he said. “It hasn’t and it won’t.”

Separately, six Conservative MPs in the region wrote to Mr Burnham, accusing him of an “inability to work constructively” with the government after he was offered “92% of what you asked for”.

They called for him to stand aside to allow other local leaders to reach a settlement reflecting the “extremely urgent and precarious position we now find ourselves in.”

Talks are set to continue on Wednesday about whether South Yorkshire will be next to enter tier three, also known as the “very high” alert level.

Other areas in tier two but known to be in discussions about tighter restrictions are West Yorkshire, the North East, Teesside and Nottinghamshire.

When the restrictions come into force in Greater Manchester, about 5.8m people in England will be living under the highest level of coronavirus alert.

What is the virus situation in the UK?

On Tuesday, the UK recorded its highest daily death toll since 5 June, with 241 more people dying within 28 days of a positive test for the virus.

Another 21,331 confirmed cases were reported, the first time cases have exceeded 20,000 since mass testing began – with the exception of 4 October, which included thousands of cases from previous days which had been missed due to a spreadsheet error.

The health secretary said the virus “remains a perilous threat” with cases among the over-60s continuing to rise.

He said the average daily hospital admissions in Greater Manchester are now higher than they were in 26 March, just after the UK went into a national lockdown.

But Mr Hancock said in the north-east of England there were “early signs” cases were “starting to flatten”, although the fall in infections was so far happening among young people who were least at risk.

The deal fell over a gap of £5m

Greater Manchester leaders originally submitted a request for £90m, which had been costed by a former Treasury official.

On Tuesday morning, they discussed £75m with government officials, which would have covered the period until the end of the financial year.

It’s understood Boris Johnson and Mr Burnham themselves discussed a figure of £60m but were unable to agree – Mr Burnham suggested it was not possible to accept less than £65m.

Ministers were reluctant to set a precedent of giving one region more proportionately than another, especially given ongoing talks with several other parts of the country which could also face tougher restrictions.

But government sources have suggested Mr Burnham was intransigent, with one saying: “Other local leaders in GM were more reasonable and constructive, but Burnham was too proud to make a deal.”

So after 10 days of talks (of a kind) and billions spent during this crisis, it is quite something that the deal fell over a gap of £5m – a figure not disputed by either side.