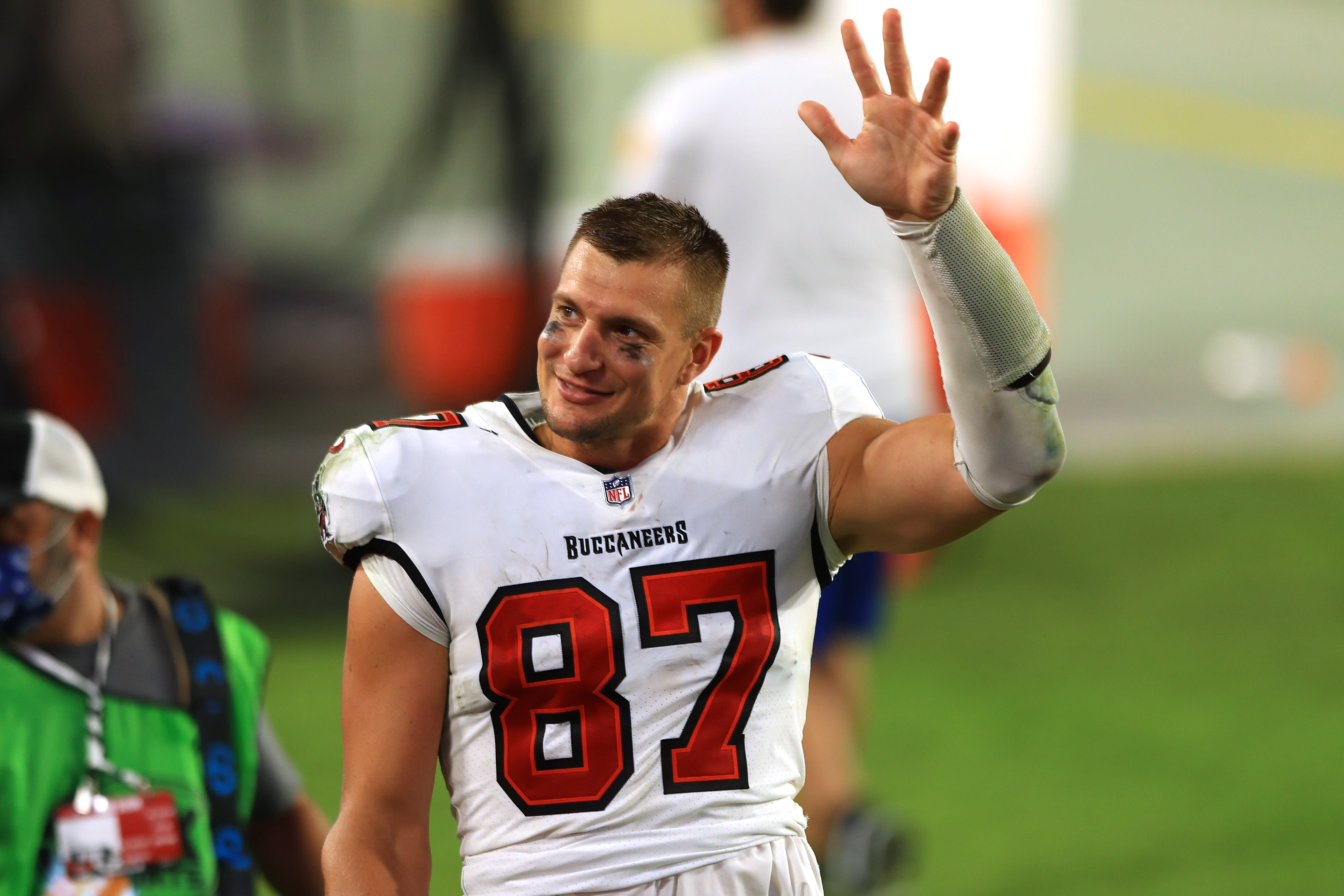 It was one of those days down in Tampa, 82 degrees and sunny, a postcard shot that helps draw retirees from around the world to Florida.

Two of the old men of the NFL were there, of course. One who used to be retired, the other who is at an age that suggests he should be. Yet they were getting to work, just like always.

There was Tom Brady, 43, and there was Rob Gronkowski, 31. They didn’t look past their primes. If it weren’t for the pewter on the uniforms or the lack of foliage on the palm trees, you’d think they were still up in New England, where they connected 597 times (playoffs included), 90 of them for touchdowns (playoffs included).

Particularly late in the second quarter, No. 12 lofted up a fade to the corner of the end zone and big No. 87 adjusted late to it, secured it in his mitts and stomped his feet down as he fell to the turf for the score.

It was one of five Gronk receptions (totaling 78 yards) on the day. It was his first touchdown as a Buccaneer.

“We had the matchup we were looking for on the fade ball,” Tampa coach Bruce Arians said. “Gronk did a heck of a job adjusting to that ball.”

About the only issue was the touchdown celebration. Gronkowski is famous for violently spiking the football with his arm after each score. Yet this time he switched to his left and what he delivered lacked comparable power.

“The spike was not monstrous,” Gronkowski said on Fox Sports after the game. “It was a lefty. The right arm is a little sore so I had to do a lefty spike. Just overall, I’m just glad I got a spike.”

Just another guy down in Florida getting old.

It was Gronkowski’s first touchdown for anyone other than the Patriots, whom he played nine legendary seasons before retiring after the 2018 campaign. Brady, of course, spent 20 years in Foxborough before coming south last offseason.

Brady’s move was enough to lure Gronk back into the NFL. Injuries had slowed him in his final seasons with the Patriots. The Bill Belichick regime had seemingly doused some of his passion for the game. He never lost his connection with Brady, though.

Back before the 2018 season, he blocked a trade to the Detroit Lions, saying he’d rather retire than catch passes from anyone other than Brady. So once Brady was freed from New England, why not give it another shot? A year away from the NFL grind — he did some media work and appeared in the WWE — reinvigorated him.

“My body healed up,” Gronk said this past summer.

The start to the season in Tampa was slow. He caught just two passes in a Week 1 loss to New Orleans and none a week later in a victory over Carolina. In the second game, Brady targeted him only once.

Gronkowski looked lumbering, and it was fair to wonder what he might have in the tank or whether the rust of a year off would prove more challenging to shake off than he thought.

Then came Sunday in an anticipated matchup with Green Bay where he looked a lot like the Gronk of old. There was a 13-yard pass for a first down. There was a screen for 4. There was a 31-yarder on a crossing route. There was the touchdown.

“Things have been going well in practice,” Gronkowksi said. “I just knew if I kept sticking with it and kept doing what I do in practice, things would start clicking. Sometimes they don’t click right away.”

This was the Gronkowski that Tampa was hoping to see.

“He played great today,” Brady said. “Got to keep trying to get him and Cam [Brate] the ball, the tight ends can really help us out.”

Brady threw for 166 yards and two touchdowns. He had no interceptions and the offense ran smoothly (no penalties). He did exactly what the Buccaneers were looking for, a guy who could manage the talent around him and win big games. It was the Packers’ Aaron Rodgers who took four sacks and threw two picks.

For Gronkowski, there was more than just his stat line. He was an effective blocker, helping the offensive line dominate the Packers. Tampa rushed for 158 yards (Ronald Jones II had 113 of them, as well as two touchdowns). This was always Gronkowski’s added value.

“He made some huge, huge plays [for] us,” Arians said. “It speaks volumes for him, and he’s playing with a bum shoulder. The blocking. The receiving. He’s just one of the best all-around tight ends to play the game. He’s in good football shape. We just have to watch his snap count.”

Gronk didn’t speak to the media after the game via Zoom. Brady, meanwhile, was calm in his praise and basically reverted back to the Patriot Way of downplaying a big win.

“We just have to keep building and growing,” Brady said.

That’s fine. You don’t overdo it when you’re 4-2. Besides, it’s October. Super Bowls aren’t won this month. Tampa hosts the big game, though, this postseason (whenever it’s played). Brady, Gronkowski and the Bucs want to be the first team to ever win a Vince Lombardi Trophy at home.

It’ll probably be nice and sunny then, too. Perfect for former or near retirees. That’s the plan anyway.