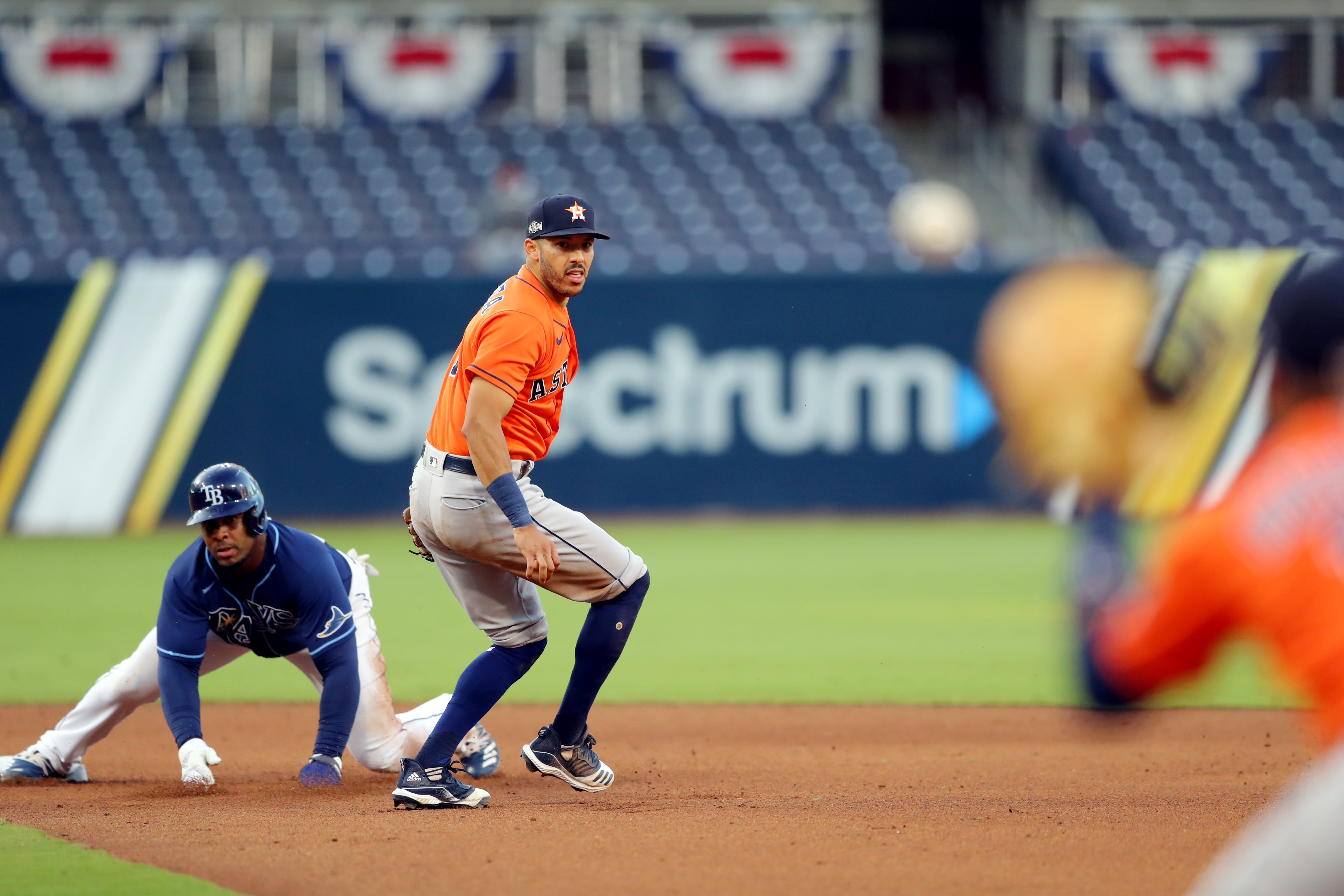 Don’t get distracted by the details.

The details this time looked like the Rays’ Yandy Díaz’s biceps. And his snarl while stepping toward the pitcher’s mound after Astros rookie Framber Valdez walked him in the bottom of the sixth inning of ALCS Game 6.

Houston’s catcher Martín Maldonado got involved. And then Game 5 hero Carlos Correa stepped in to mediate, pacifying Díaz en route to first base and pep talking his young pitcher into inducing a double play to get out of the inning. You could get distracted trying to lip read the drama.

Don’t get distracted by the details that don’t belong in the final game story, either, like how Manuel Margot hit twice as many home runs (two) in one night as he did all season (one), and that still proved insufficient.

Even the whole context of the postseason fades to details once the first pitch has been thrown. The players know what’s on the line — either a shot at their first ring or a practically unprecedented collapse for the Rays, a chance to loudly prove a point or else be eliminated to everyone else’s delight for the Astros — but it doesn’t dictate the outcome. Games don’t actually come down to who wants it more.

The details look a lot like the pivot point sometimes, too: Rays manager Kevin Cash pulling his Cy Young-winning starter in the fifth inning after only 82 pitches with two on and no outs. Blake Snell had struggled with walks to that point but was still nursing a 1-0 lead. He wanted a chance to get out of the inning, he wanted to give Diego Castillo more time to get ready. It was frustrating, he was frustrated, he said repeatedly after the game, to get taken out.

Usually is not always. With Castillo on the mound, the Astros scored four runs in the fifth. They scored three more off a kid who made his major league debut this month, in what was ultimately a 7-4 win on Friday night to force a Game 7.

That decision will merit the most debate in the wake of a disappointing night for the Rays, but rarely do starters go the distance anymore and always one team loses by virtue of their pitchers giving up too many runs. So you can almost always second-guess exactly when to go to the bullpen in a loss.

Until the fifth inning of Game 6 of the ALCS, the Rays bullpen had not allowed an inherited runner to score this postseason, stranding 21 over the first 12 games.

The decision of exactly when to turn to an unbeaten bullpen should have been just a detail. That it didn’t work made all the difference.

The Astros won the old-fashioned way: They put the ball in play and then, while it was bouncing around the field, they ran from one base to the next. I mean really old fashioned, even a sacrifice bunt got involved.

The regular season ended with the Astros below .500, but their lineup excelled at putting the ball in play. They had the lowest strikeout rate in baseball and the highest contact rate. That didn’t translate to a lot of wins, but it translated to enough wins. Even before Friday night’s game, they had the lowest strikeout rate in the postseason, too, and the highest Statcast expected batting average.

What that looked like in the first three games of the ALCS was a chance for the Rays to put on a defensive clinic. Everywhere the Astros hit the ball, a defender in navy blue was perfectly positioned to field it, or else not so perfectly positioned but able to contort his body in time to get there. The Rays weren’t getting lucky — it’s not luck if you’re trying really hard to do it and also you’re talented — but the Astros were unlucky to have encountered a team that seemed to be effortlessly converting contact into outs.

But putting the ball in play is also the best way to get hits, the best way to keep the pressure on even when the odds seem long. And on Friday night that’s what worked for Houston. It wasn’t one single thing so much as it was just making contact and running counter-clockwise.

They’ll tell you it’s already historic that the Astros, once down three games to none in this ALCS, forced a Game 7. On Twitter, hyperbolic reporters — who want to be the first to salivate over the agony of Rob Manfred handing over a piece of metal to the Astros at the end of the first season since their sign stealing was revealed — are already writing the final scene of the World Series.

And by the numbers it’s true that they’re in rare company, only the second team in history to go from 0-3 to Game 7 in the Championship Series. But Alex Bregman would not have implored his teammates to watch a documentary about the 2004 Red Sox — life in the postseason bubble includes access to ample screens and not much else, presumably — if the 2004 Red Sox had lost that Game 7, or even if they had advanced only to fall short in the Fall Classic.

All of which is simply to say, don’t publish your punchline about the 2020 champion Astros just yet. It’s not the narrative momentum or ironic injustice that will determine the fate of the ALCS between the Astros and the Rays.

MPs to vote on delaying England’s lockdown easing by four weeks
KD vs. everybody: The best player in the world
Obamacare: US Supreme Court upholds affordable healthcare law
Spanish man jailed for killing and eating his mother
Troubled US teens left traumatised by tough love camps