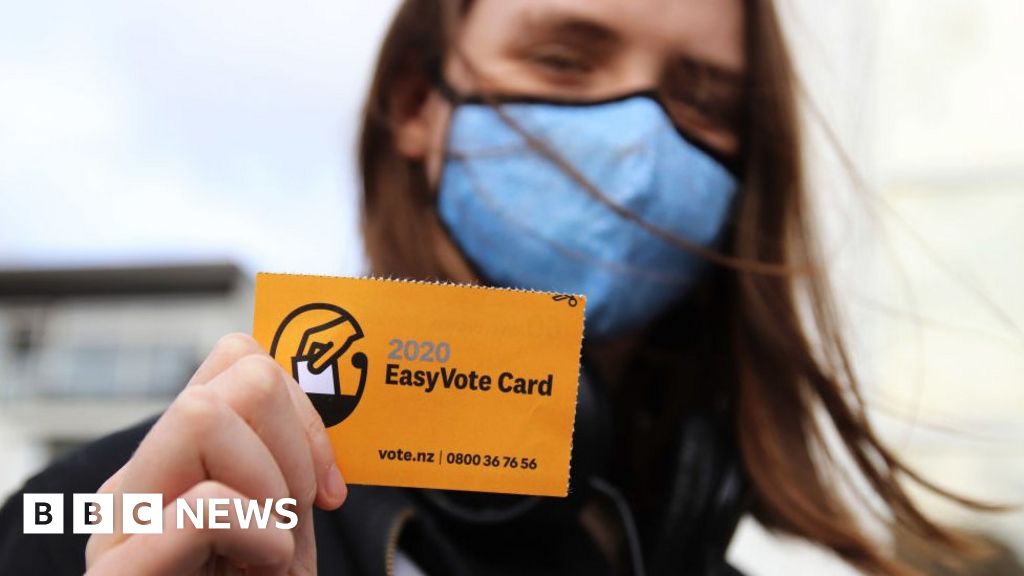 Early results put Prime Minister Jacinda Ardern on course to win a second term, boosted by her successful handling of the coronavirus pandemic.

But the big question now is whether she will win a parliamentary majority, which would be unprecedented.

The vote was originally due to be in September, but was postponed by a month after a renewed Covid-19 outbreak.

More than a million people have already voted in early polling which opened up on 3 October.

New Zealanders were also asked to vote in two referendums alongside the general election vote.

Could Ardern win an outright majority?

Early results show Ms Ardern is comfortably on track to win a second term. With 5% of the vote tallied, Ms Ardern’s Labour Party has taken around 50% of the vote, according to the Electoral Commission.

The centre-right National Party is on around 26% of the vote, with the Green Party on about 9%.

However, at question is whether the Labour Party could win an outright majority. No party has managed to do so in New Zealand since it introduced a parliamentary system known as Mixed Member Proportional representation (MMP) in 1996.

Professor Jennifer Curtin of the University of Auckland says have been similar situations in the past where one leader was tipped to win a majority, but it did not come to pass.

“When John Key was leader, opinion polls put his chances at 50% of the vote… but on the day it didn’t work out,” she said.

“New Zealand voters are quite tactical in that they split their vote, and close to 30% give their party vote to a smaller party, which means it is still a long shot that Labour will win over 50% of the vote.”

Another analyst, Josh Van Veen, told the BBC that he believed the “most likely scenario” was that Labour would need to form a government with the Green Party – one of two coalition partners that helped Labour form the government in 2017.

He adds that Ms Ardern’s handling of the pandemic has certainly won her points, adding that it was “quite possible” New Zealand would have “rejected her if not for Covid-19”.

“At the beginning of the year… there was a very real perception she had failed to deliver on her promises. She was going to end child poverty and solve the housing crisis but did neither,” he said.

“My sense is that her popularity will decline once the election is over.”

What are the main issues people are voting on?

Looking to oust her is Judith Collins, dubbed the “Crusher”.

The 61-year-old former lawyer belongs to the National Party. National has pledged to increase investment in infrastructure, pay down debt and temporarily reduce taxes.

But one of the main differences between Labour and National, says Mr Van Veen, is the different leadership styles both leaders bring.

“Ms Ardern’s kind, empathetic leadership is about making people feel safe. Ms Collins offers something else… [and] appeals to those who find Ms Ardern patronising and want to feel in control again,” he said.

What else are people voting for?

Aside from choosing their preferred candidate and party, New Zealanders will also receive a paper asking them to vote in two referendums: the end of life choice on euthanasia and cannabis legalisation.

The first will allow people to vote on whether the End of Life Choice Act 2019 should come into force. It aims to give terminally ill people the option of requesting assisting dying.

This is a binding vote, which means it will be enacted if more than 50% vote “yes”.

The cannabis legalisation and control referendum will allow New Zealanders to vote on whether the recreational use of cannabis should become legal.

This however, is not binding – which means even if a majority of people vote “yes” – cannabis might not become legal straight away. It would still be up to the incoming government to introduce a bill to legalise this.

How does NZ’s voting system work?

New Zealand has a general election every three years. Under its Mixed Member Proportional (MMP) system, voters are asked to vote twice – for their preferred party and for their electorate MP.

A party must receive more than 5% of the party vote or win an electorate seat to enter parliament.

For example, if a party wins 4% of the party vote but no electorate seats – it will not manage to enter parliament.

There are also a number of seats reserved exclusively for Maori candidates.

In order to form the government, a party needs to win 61 of 120 seats. But since MMP was introduced, no single party has been able to form a government on its own.

So parties usually have to work together to get the numbers they need – resulting in coalition governments.

This also means a smaller number of politicians from minor parties could decide the election despite the major parties getting a bigger vote share.

That’s what happened in the 2017 election, when National Party won the most number of seats, but could not form the government as the Labour party entered into a coalition with the Greens and NZ First.