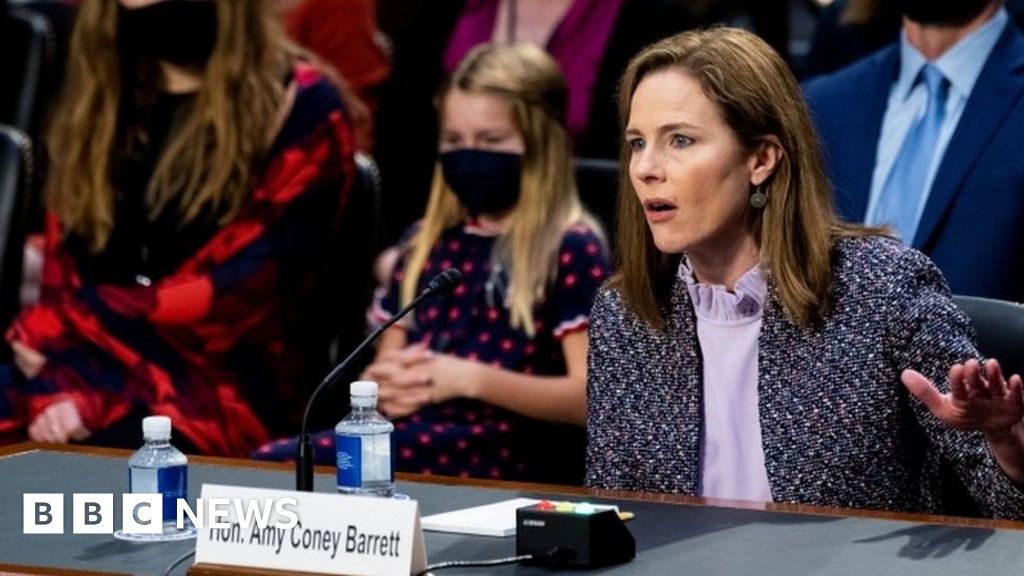 Donald Trump’s nominee for the US Supreme Court is facing more tough questions in a Senate hearing, a day after sidestepping some key issues.

Amy Coney Barrett has insisted she will decide cases as they arrive and not apply a personal agenda.

Democrats have failed to draw her on issues like abortion, healthcare and LGBTQ rights and on Wednesday she again declined any “hypothetical” questions.

Republicans are pressing to confirm her before the 3 November election.

Her confirmation would give the nine-member court a 6-3 conservative majority, swinging the ideological balance of the court for potentially decades to come.

Wednesday is the third day of the hearing, being conducted by the Senate Judiciary Committee, and the second in which Judge Barrett has faced questions from senators. Each senator gets 20 minutes for one-on-one questioning with the judge.

What has happened so far on Wednesday?

Lindsey Graham, Republican chairman of the Senate Judiciary Committee, was happy to highlight Judge Barrett’s views, saying: “This is the first time in American history that we’ve nominated a woman who is unashamedly pro-life and embraces her faith without apology.”

Judge Barrett responded to one question by saying the 1973 Roe vs Wade ruling that recognised a woman’s constitutional right to abortion did not constitute a “super-precedent” that cannot be revisited.

As well as on abortion rights, Democratic Senators have narrowed in on the fate of the Affordable Care Act (ACA) – also known as Obamacare – should Judge Barrett be confirmed. Democrats fear her as a threat to issues such as the healthcare reforms passed under former President Barack Obama.

The court hears a case against the public health insurance scheme next month.

In a 2017 law review essay, Judge Barrett criticised Supreme Court Chief Justice John Roberts’s 2012 opinion on the act’s individual mandate, which imposed a penalty for anyone who did not sign up for insurance. When pressed on Tuesday, Judge Barrett insisted she was “not hostile to the ACA”.

And on Wednesday, she defended past criticism of the ACA, saying she was “speaking as an academic”. Asked by Democratic Senator Patrick Leahy if she had ever spoken in favour of the legislation, Judge Barrett said no, adding she had “never had a chance to weigh in on the policy question”.

Another concern from Democrats is whether she would be involved in any challenge by Mr Trump to the presidential election result. On Tuesday Judge Barrett declined to state if she would abstain from taking part in cases involving her nominee, the president.

On Wednesday, she agreed when Sen Leahy said that no-one should be above the law, but did not answer directly on presidential self-pardons. One of the “hypothetical” questions she declined to answer was whether a president had the right to unilaterally delay a general election.

Questioning of President Trump’s nominee will continue into the afternoon. Thursday, on the final day of hearings, senators will call a series of witnesses for questioning.

Republicans are expected to use their witnesses to highlight Judge Barrett’s character and qualifications, while the Democratic line-up will again focus on their key talking points: the future of abortion and the ACA.

In other comments by Judge Barrett so far:

Who is Amy Coney Barrett?

After the hearings end, any committee member can require an additional week before the formal panel vote on whether to present the nomination for confirmation before the full Senate.

If she passes the committee stage, the full Senate will vote to confirm or reject Judge Barrett’s nomination. Republicans already appear to have the 51 votes needed to get Judge Barrett confirmed.

Senate majority leader Mitch McConnell has vowed to hold a confirmation vote before the presidential election.

Barring a surprise, Democrats seem to have few options to prevent her from gliding through the Senate to the Supreme Court bench. The remaining expected schedule is: