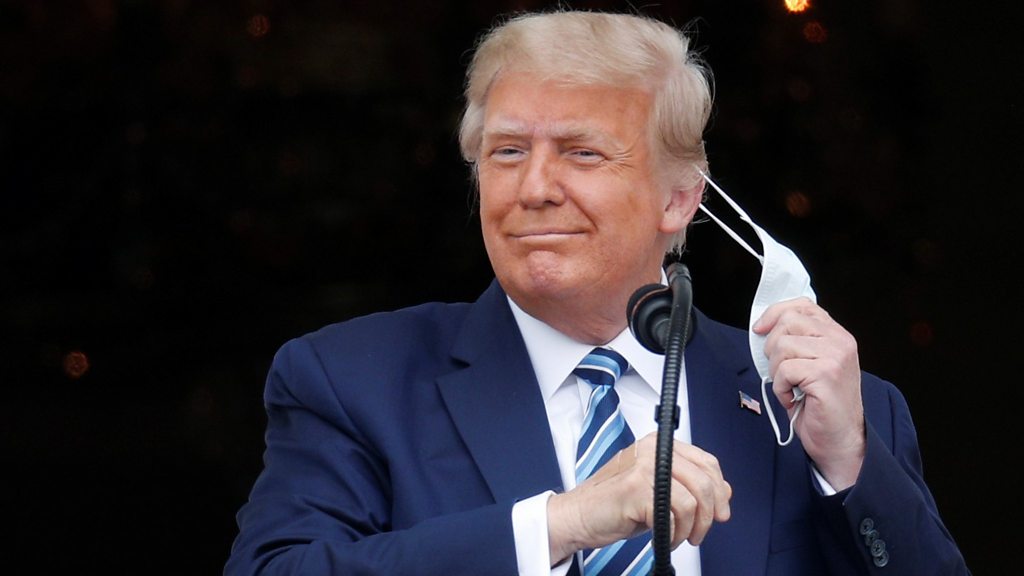 US President Donald Trump is no longer a Covid transmission risk to others, the White House physician has said.

Sean Conley’s memo is the first update on Mr Trump’s health since Thursday.

Earlier on Saturday the president delivered a speech in front of cheering supporters at the White House in his first public appearance since being hospitalised with the virus.

There had been concerns that he might still be contagious following his three-day hospital stay.

The doctor’s memo said the latest tests on the president revealed there was “no longer evidence of actively replicating virus”, and that his viral load was “decreasing”.

However, the statement did not say whether Mr Trump had tested negative for Covid-19.

In the memo, Dr Conley said President Trump had been given sensitive lab tests that detect how much of the virus is still in his system.

“This evening I am happy to report that in addition to the President meeting [Centers for Disease Control and Prevention] criteria for the safe discontinuation of isolation, this morning’s Covid PCR sample demonstrates, by currently recognised standards, he is no longer considered a transmission risk to others,” he said.

Mr Trump first started showing symptoms of coronavirus 10 days ago, and was admitted to Walter Reed Medical Center a day later, on 2 October.

While there he was treated with – among other medication – dexamethasone, a steroid medication usually only used on people who are seriously or critically ill with the virus.

Dr Conley’s latest update comes after President Trump told a crowd at a White House event that he was “feeling great”. He has also said that he is no longer taking any medication against Covid-19.

The event on Saturday was officially a “peaceful protest”, but looked, critics said, much like a Trump campaign rally.

His rival in next month’s presidential election, Joe Biden, has been campaigning in Pennsylvania. He said his “heart goes out” to all those families who have lost someone they love to coronavirus.

Polling suggests Mr Biden has a single-digit lead over Mr Trump and an ABC News/Ipsos poll found that just 35% of Americans approved of how Mr Trump has handled the coronavirus crisis.

What were the concerns over the event?

Questions over safety were raised after a gathering to unveil Mr Trump’s nominee to the Supreme Court resulted in at least 11 people subsequently testing positive for Covid-19 – including the president. Top US infectious disease expert Dr Anthony Fauci described it as “a super-spreader event”.

Senior Democratic Congressman Adam Schiff said it was “morally bankrupt” for the president to hold “another super-spreader rally” at the White House.

The White House said in advance of Saturday’s event that those attending would be required to undergo a temperature check and wear face masks, and encouraged to practice social distancing.

However, images from the event showed several hundred people packed closely together.

The president’s campaign team has also said he is planning to attend a “big rally” in Florida – a battleground state in next month’s presidential election – on Monday, followed by trips to Pennsylvania and Iowa.

Mr Biden expressed disbelief at the president’s plans to hold rallies and criticised the Trump administration’s lax stance on mask use as reckless.

“I wouldn’t show up unless you have a mask and can distance,” Mr Biden said, speaking while campaigning in Las Vegas on Friday.

Meanwhile, ethics experts say that hosting political events at the White House, as well as being against long-standing convention in the US, could violate federal law.

The Hatch Act, dating from 1939, bars federal employees from being involved in campaign activities while on duty. While the president and vice-president are exempt, most White House employees are not.

On Thursday Sean Conley said that it would be safe for Mr Trump to return to public engagements on Saturday [10 October] as that would mark “day 10” since his diagnosis on Thursday 1 October.

Following his diagnosis, Mr Trump spent three nights in hospital and was treated with the steroid dexamethasone, the antiviral drug remdesivir and a cocktail of manufactured antibodies made by the company Regeneron.

The CDC recommends self-isolation for at least 10 days after coronavirus symptoms first appear, with more severe illness, such as that requiring hospital treatment, potentially needing up to 20 days.

Making up for lost time

The White House says this was not a campaign event – but it looked, and sounded, remarkably like one.

Black and Latino voters could be key in battleground states like Michigan and Florida – both were won by tiny percentage points in 2016.

The president seemed much more like himself than in recent days.

This was him saying “I’m back”, and re-starting a campaign that has effectively been stalled since his Covid diagnosis on 1 October.

With the election just weeks away, he is keen to make up for lost time.