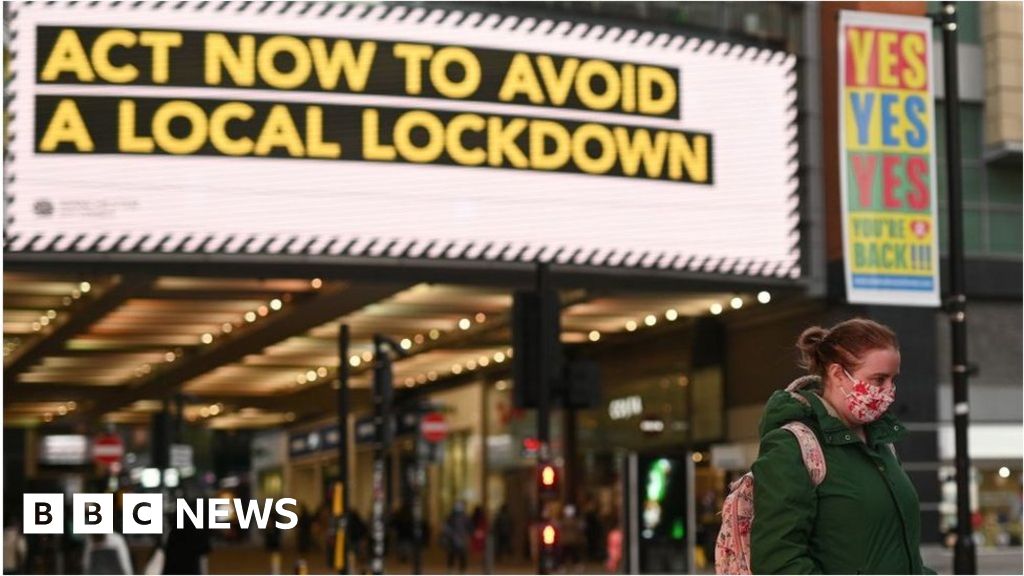 Coronavirus cases in England have “increased rapidly”, data shows, as ministers grapple with what to do next.

Estimates suggest between one-in-170 and one-in-240 people you meet in the street has the virus.

Both current cases, and the speed at which they are increasing, are much higher in the north of England than the national average.

A deluge of data shows a clear pattern of rising cases.

The Office for National Statistics (ONS) estimates 224,000 people in homes in England had the virus, up to 1 October. That is roughly double the figure reported for each of the last two weeks, and suggests hopes of a “levelling off” last week may have been a false dawn.

The organisation estimates that one in 500 people is infected in Wales and Northern Ireland.

The Covid Symptom Study app – which uses data from 4 million people and 12,000 swab tests – estimates 21,903 people are developing Covid symptoms every day across the UK. That is 1,000-a-day more than a week ago.

The R number – the average number of people each infected person passes the virus onto – is estimated between 1.2 and 1.5. Anything above 1.0 means cases are increasing.

The largest study of coronavirus, by Imperial College London, has also reported their analysis of 175,000 people, with the last samples taken on Monday.

Across England, it says cases are continuing to increase, but not as aggressively as at the beginning of September.

But this masks a stark regional picture – with cases doubling around twice as fast in the North West, Yorkshire and the West Midlands compared to the whole of England.

It also shows there has been an eight-fold increase in cases in people over 65 as the epidemic surge that started in younger age groups bleeds into the rest of the population.

Prof Steven Riley, from Imperial, said: “I think it’s clear that the prevalence is still increasing” and that if new, tougher, measures were needed in northern England then they should come in “sooner rather than later”.

The rise in cases and people being admitted to hospital is causing mounting political concern. New rules are expected to be announced on Monday and come into force on Wednesday.

The precise details are still being debated, but measures including closing pub and restaurants, or a ban on overnight stays, are on the table.

Data presented to MPs by England’s Chief Medical Officer, Prof Chris Whitty, appears to put the hospitality sector in the firing line, given that parts of society such as schools and universities are being kept open.

It says pubs, restaurants and the hospitality sector as a whole are a major area where people testing positive for the virus have been mixing.

Gillian Keegan, minister for skills and apprenticeships, said the government had to act to stem the rise in cases.

“This is serious – it is getting out of control, and we have to do something to bring it back under control,” she said.

Sir Mark Walport, a member of the Scientific Advisory Group for Emergencies (Sage) which advises government, told the BBC: “On the 19 March, just before the first set of widespread restrictions, hospital admissions were 586 in England and on the 6 October they were 524.

“So we are very close to the situation at the beginning of March.”

Hospital admissions are around one fifth of the level at the peak in Spring, but are currently doubling every fortnight.

Sir Jeremy Farrar, another Sage member and director of the Wellcome Trust, says: “We are back to choices faced in the early March… the longer the decisions are delayed, the harder and more draconian are the interventions needed to change trajectory of [the] epidemic.”