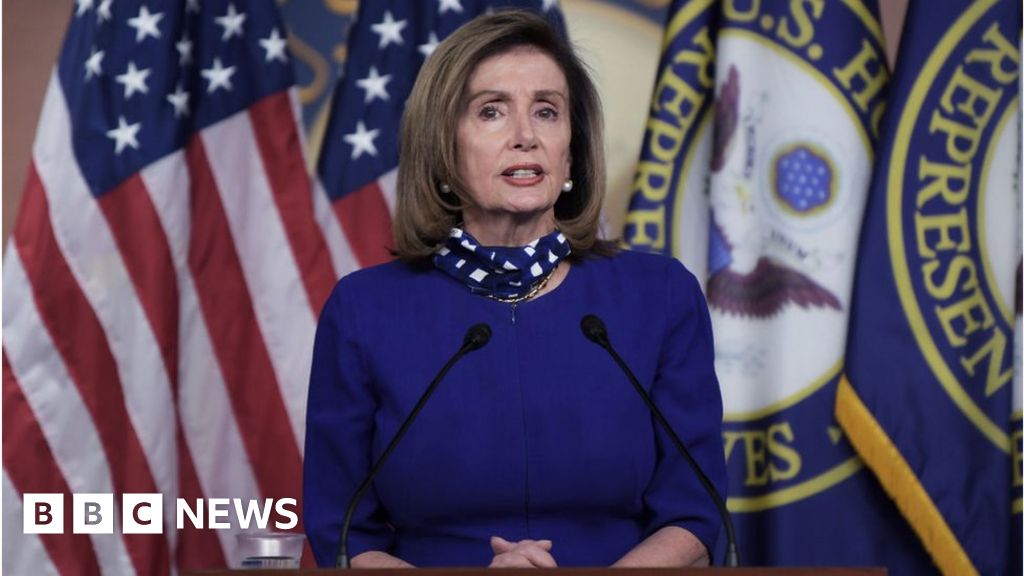 US President Donald Trump has said he is ending negotiations over a Covid-19 relief bill, and will only resume talks after the election.

He predicted he would win next month’s election and pass a bill afterwards. US stocks fell after the announcement.

Democratic presidential nominee Joe Biden said Mr Trump had “turned his back” on the American people.

“Make no mistake: if you are out of work, if your business is closed, if your child’s school is shut down, if you are seeing layoffs in your community, Donald Trump decided today that none of that – none of it – matters to him,” Mr Biden said in a statement on Tuesday.

The Republican president – who is himself currently being treated for Covid-19 – countered: “Crazy Nancy Pelosi and the Radical Left Democrats were just playing ‘games’ with the desperately needed Workers Stimulus Payments.

“They just wanted to take care of Democrat failed, high crime, Cities and States. They were never in it to help the workers, and they never will be!”

Mr McConnell later told reporters he supported the president’s move because he believed a deal with the Democrats was looking too difficult. “We need to concentrate on the achievable,” he said.

Lawmakers from both parties had hoped for another round of Covid-19 relief spending to pass ahead of the 3 November election, but Mr Trump’s tweet appears to have abruptly suspended that prospect.

It comes as coronavirus cases rise in several parts of the country, the outbreak widens among White House staff and Republican senators, and hits Pentagon top brass.

Donald Trump’s decision to kill Covid-19 relief negotiations may be a brave stand on principle, ultimately siding with conservatives who are against more massive deficit-financed spending, but it is also a very risky political move.

A multi-trillion-dollar deal would have pumped stimulus into the economy at a time when the unemployment and business growth outlook is trending downward. A jobs and spending boost – or even the prospect of one – would have helped the president make the case that he, not Joe Biden, would be the best steward of the American economy for the next four years.

Instead, the stock market dropped precipitously on the president’s announcement, and the massive permanent layoffs that have already started in the travel and entertainment industries will continue apace.

This isn’t good news for Speaker of the House Nancy Pelosi, either, as her hardline negotiating strategy ended up with nothing to show for it. More moderate Democrats, who were already expressing frustration with the lack of a deal, will only sharpen their criticism of the Democratic leadership.

Whoever wins the elections in November won’t have long to savour their victories before having to face what is sure to be a large and growing economic crisis.

In an all-too-familiar story of Washington gridlock, both Republicans and Democrats refused to compromise enough to meet in the middle.

The White House said it would back a Covid-19 relief bill of $1.6 trillion. But Mrs Pelosi was holding out for a more generous package.

Her House Democrats last week passed a $2.2tr stimulus bill, though that measure had no chance of advancing in the Republican-controlled Senate.

The Senate leader had indicated he would not support any legislation with a price tag of more than $2tr.

Mr Trump begrudgingly offered $250bn of funding for state and local governments. Mrs Pelosi was holding out for more than $400bn.

Republicans accused her of simply seeking a bail-out for Democratic-run states facing budgetary problems stemming from before the pandemic.

What is the economic situation in the US?

Analysts have warned that the economic recovery risks stalling without further aid. While the US has regained about half the jobs lost in March and April, more than 10 million people remain unemployed.

In a speech on Tuesday, the head of America’s central bank, Jerome Powell, warned of “tragic” consequences should policymakers do too little and the pace of progress slow further.

“The expansion is still far from complete,” he said. “Even if policy actions ultimately prove to be greater than needed, they will not go to waste.”

Mr Trump’s unexpected announcement comes as many of the individual benefits previously approved by Congress have already run out.

The new Congress will not reconvene until January, following the November elections.

What was Pelosi’s response?

Mrs Pelosi accused Mr Trump of “putting himself first at the expense of the country”.

“He shows his contempt for science, his disdain for our heroes… and he refuses to put money in workers’ pockets, unless his name is printed on the cheque,” she added.

“Clearly, the White House is in complete disarray,” she said, calling on Trump officials to heed Mr Powell’s advice.