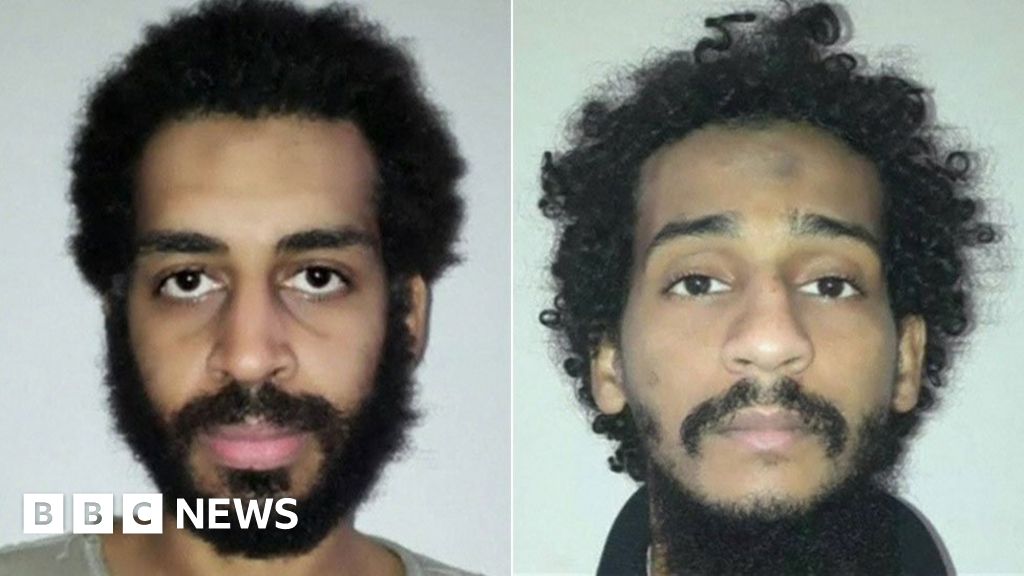 Two ex-British alleged Islamic State (IS) suspects have been charged in the US with terrorism offences over the killing of four American hostages.

Alexanda Kotey and El Shafee Elsheikh are accused of belonging to an IS cell dubbed “The Beatles” involved in kidnappings in Iraq and Syria.

The pair are being held in FBI custody and will appear in a US federal court in Virginia later.

The men, who had been in US custody in Iraq, previously denied the charges.

US Assistant Attorney General John Demers told a press conference the charges were “the result of many years of hard work in pursuit of justice” for the four Americans who died – James Foley, Steven Sotloff, Kayla Mueller and Peter Kassig.

Addressing the families of the victims, he said: “Although we cannot bring back your children, we will do all that we can do: obtain justice for them, for you, and for all Americans.”

He added: “These men will now be brought before a United States court to face justice for the depraved acts alleged against them in the indictment.”

The charges carry a maximum penalty of life in prison.

The pair are alleged to have been members of an IS gang – nicknamed by hostages after the 1960s pop group due to their British accents – which was responsible for the death of hostages in Iraq and Syria in 2014.

Some of the victims – who included American journalists and UK and US aid workers – were beheaded and their deaths filmed and broadcast on social media.

Kotey and Elsheikh, originally from west London, were previously stripped of their UK nationality.

The charges they face are:

The IS group’s alleged ringleader, Mohammed Emwazi, known as “Jihadi John” died in a drone strike in 2016.

Referring to his death, Mr Demers said he had “faced a different kind of American resolve – the mighty reach of our military, which successfully targeted him in an air strike several years ago”.

The assistant attorney general was asked by reporters whether the death penalty was not being sought solely because the UK government had made it a requirement in return for its co-operation.

“The attorney general decided that we should provide the death penalty assurance in order to get the British evidence and see that justice could be done more expeditiously than if we had to continue to litigate this issue in the courts in the United Kingdom,” Mr Demers said.

“The decision was to try to keep the option (of seeking the death penalty) open at first but ultimately that didn’t work.”

Last month the UK sent evidence to the US following assurances the two men would not face the death penalty.

FBI director Christopher Wray told the press conference: “We mourn not only our American victims but also the British victims David Haines and Alan Henning, and victims of all nations who suffered unimaginable cruelty at the hands of Isis.”

Mike Haines, whose aid worker brother David was killed by the IS cell in 2014, said he was relieved “the fate of these two men is closer to being decided but this is just the beginning”.

“The pain we experienced as families was excruciating when we lost our loved ones and the last three years have been a long, horrible waiting game,” he said.

“It was a big win for us knowing that the US courts would be taking this forward because we have been waiting years since they were first detained.”

It has taken nearly eight years to reach this moment – from the day that James Foley and John Cantlie were taken hostage in Syria to the reading out of the indictment against two of the alleged perpetrators, both now in US custody.

The eight charges against them are so serious that each one carries a maximum sentence of life in prison.

The defendants have previously denied the charges linked to their alleged involvement in the murder of US and British hostages.

But both the US and British governments appear confident that there is a strong case for the prosecution.

Over the course of the coming trial the court is likely to hear some harrowing testimony from those who survived IS captivity – men whose freedom was ransomed in exchange for millions of Euros while their fellow prisoners from the US and Britain suffered horrific deaths at the hands of their captors.

IS once controlled 88,000 sq km (34,000 sq miles) of territory stretching from western Syria to eastern Iraq and imposed its brutal rule on almost eight million people.

The liberation of that territory exposed the magnitude of the abuses inflicted by the jihadist group, including summary killings, torture, amputations, ethno-sectarian attacks, rape and sexual slavery imposed on women and girls. Hundreds of mass graves containing the remains of thousands of people have been discovered.

UN investigators have concluded that IS militants committed acts that may amount to war crimes, crimes against humanity and genocide.