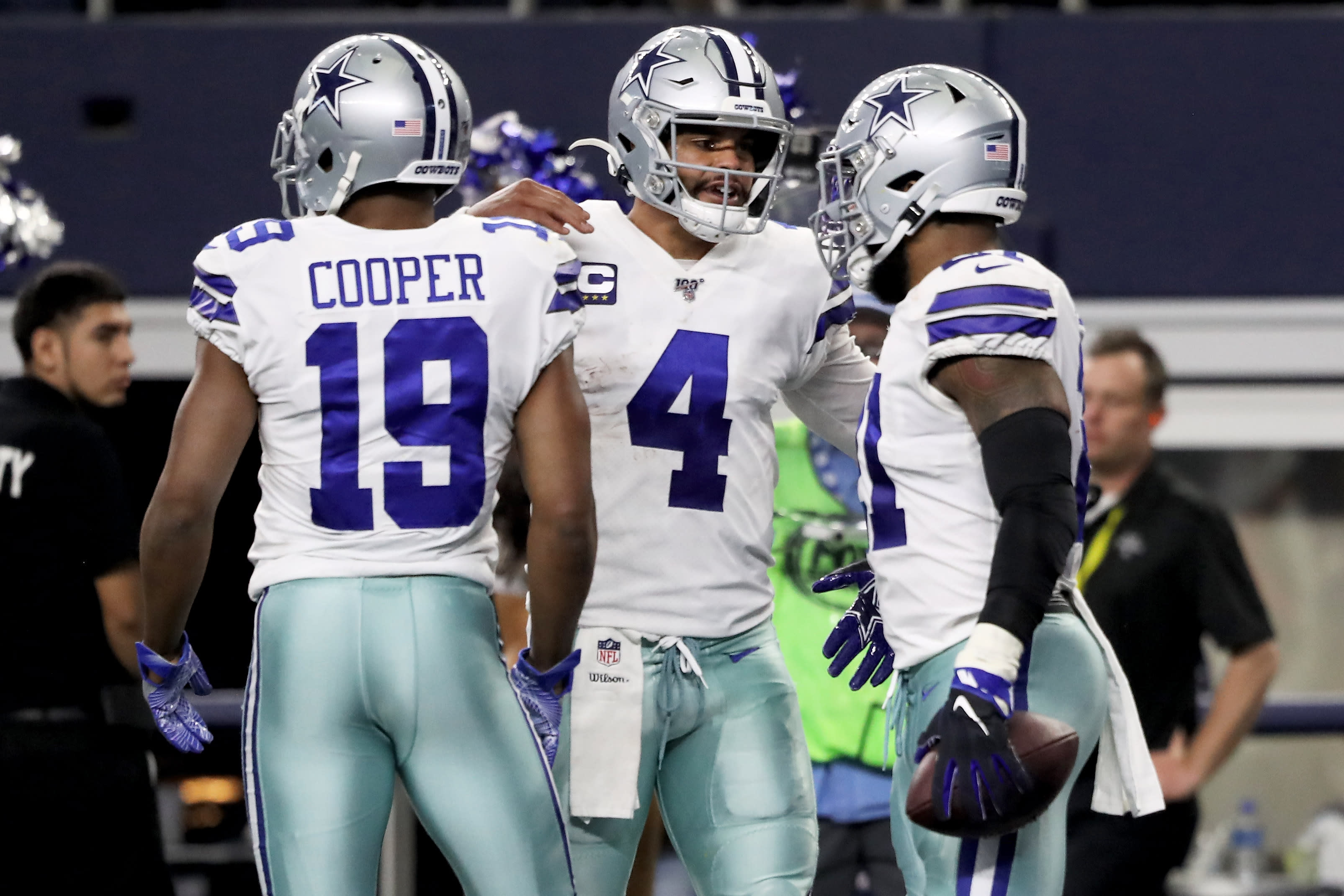 Dak Prescott is on pace to finish with 6,760 passing yards this season.

A bulk of the raw stats can be attributed to his defense. The hideous stop unit has consistently put Dallas in a position to have to throw the ball. Dallas has trailed on 85 percent of their offensive plays in 2020. Even still, they’ve been committed to throwing the ball in smart situations. The Cowboys throw the ball on 68 percent of their first- and second-down plays, which is the highest mark in the NFL. This is a clear shift in philosophy, as they ranked 18th, 25th, and 31st in early down passing rate from 2019, 2018, and 2017.

The Cowboys are giving you everything you should want in an offense from a fantasy football sense. Honestly, they look like a Big-12 team.

Here’s how the volume is distributed in the offense:

Amari Cooper is the clear top receiver, leading the team in target and air yards share. He ranks second in the NFL in catches and third in yards.

CeeDee Lamb has settled into a comfortable role for Dallas. He leads all pass-catchers in 2020 with 34.5 slot routes per game. With just 9.2 air yards per target, he’s been getting plenty of layup looks.

Michael Gallup is mostly being targeted down the field on low-percentage routes. We’ve already seen the range of outcomes here. He enjoyed a massive outing in Week 3 followed by a quiet outing despite Prescott’s eruption in Week 4. Gallup has immense value to the team but will be a volatile producer in this role.

Dalton Shultz slid right into the role Blake Jarwin was ticketed for. It doesn’t help those who drafted Jarwin much at this point but Shultz is proving you got the process right on that one.

Lastly, Ezekiel Elliott does have a strong role as an outlet receiver. He trails only Alvin Kamara in catches and yards among running backs. Good thing too, because while no one is really talking about it, Elliott has been just a middling runner to date here in 2020. After a strong Week 1, he’s gone under 60 yards in two of three games.

Coming into the year, it looked like DJ Moore would be the clearly established top receiver in Carolina while Robby Anderson and Curtis Samuel would duke it out for the No. 2 gig. So far, neither things have been correct.

Robby Anderson has been used as the No. 1 guy through four weeks. Not only does he lead the team in target share, but his air yards per target also shows a guy that’s being used as a full-field threat. He’s been the target on the type of routes that lead to yards after the catch; Anderson leads the team by a wide margin with 193. He’s also drawn five red-zone looks.

Moore, on the other hand, is playing the role many assumed Anderson would fill. He has the highest depth of target on the team, a single look in the red zone and, despite being one of the best YAC receivers in the league from 2018 to 2019, has just 33 yards after the catch. Traditional volume stats point to Moore as a buy-low and that’s certainly the case but Anderson has, at worst, established himself as a WR2/3 fringe in fantasy football right now.

All of these guys are in play against the Falcons, even Samuel. He leads the team with 16.5 slot routes per game with just 6.8 air yards per target. This signifies a new role for Samuel after he was a downfield guy in 2019. The Falcons check-in with the sixth-most yards and catches allowed to slot receivers.

The Giants offense is one of the worst in the league

New York came into the year with some slivers of optimism. Daniel Jones entered his second season paired with Saquon Barkley while surrounded by a strong group of receivers and a healthy Evan Engram. Four weeks into the season and the results have been nothing short of a disaster.

Barkley and Sterling Shepard hit IR almost right away, Jones is still one of the most mistake-prone passers in the game and, to absolutely no one’s surprise, Jason Garrett’s system has not lit the football world on fire. There are about no positives to take away from the Giants offense, especially the last two weeks.

Now, it’s worth noting that the Giants drew a brutal schedule to start 2020. Pittsburgh, Chicago, and San Francisco might be some of the few actually good defenses in the league.

In Week 5, New York draws a matchup with a Dallas Cowboys defense that has ceded yards and points in bunches. One week after letting Russell Wilson deal through the air, Dallas was run over by Cleveland for more yards (307) than they’ve ever allowed in franchise history. No matter how you want to beat this Cowboys defense, they’ll acquiesce.

Is New York good enough to take advantage of this prime spot, though? It’s impossible to have any degree of confidence. You certainly can’t expect their aged running back room to thrive, despite what Cleveland did. Jones has looked more overwhelmed than capable of taking advantage of a great spot.

One interesting guy, however, may be Engram, who leads the team in targets (30) and has run 35 routes per game with 66 percent coming from the slot. Dallas has been rocked by tight ends just as much as wideouts.

There are *maybe* three to five good defenses in the NFL

The seven listed above are the only teams below -10 percent (negative is good in this instance). The almost five-point gap between three and four is noticeable. The Colts, Bucs, and Steelers are the three defenses we can say without any doubt are good units.

The Colts are flying to the ball and clamping down passing lanes with DeForest Buckner wreaking havoc and looking like a transformative talent. On-balance, the Buccaneers defense has been the strength of the team as the offense has worked into form. The Steelers are loaded with talent and create more pressure than any other team. In a season where defenses have looked several steps behind offenses, these three stand out.

The next two teams in Washington and Kansas City are underrated units but slightly unbalanced. Both are top-three pass defenses but are well below average against the run. San Francisco and Chicago round out this top-seven. The 49ers have been a strong defense overall, which is surprising considering they have so many injuries. The Bears would be closer to fourth in my own personal rankings. Bet on these two units being better defenses than Washington or Kansas City throughout the course of 2020.

The overall point here is that truly difference-making defenses are few and far in between this season. If a unit isn’t on this list, they probably aren’t swinging matchups one way or another. Even defenses No. 3-7 on this list might not be doing that either.

Justin Herbert when under pressure (ranks among QBs)

The positives from Justin Herbert’s run as the Chargers starter are starting to stack up. However, what’s most impressive is how accurate and aggressive he’s been under duress. Keep in mind, we have a good sample size of plays to draw on here, as Herbert has 30 pass attempts under pressure this year (per SportRadar). Only four quarterbacks have more and Herbert didn’t even start Week 1.

The trait in question was perfectly on display against the Tampa Bay Buccaneers in their Week 4 matchup. Herbert consistently delivered perfectly placed deep shots with pass rushers barreling down on him.

This is an incredible throw by Herbert! 60 yard dime under pressure. pic.twitter.com/pFmRlPuEC8

A few more performances like this and we need to rewrite the expectations book on Justin Herbert. Even as the injury situation around him has eroded, he’s improved each week. Considering that the players on the other end of those ropes in Week 4 weren’t Mike Williams or another proven stud (far from it), we might need to open our minds to Herbert being a talent-elevating type of quarterback.

These five teams are clearly committed to a pass-first mentality, no matter the game script. We know that Seattle and Dallas are two of the most friendly passing environments in the league right now. No surprise there.

Jacksonville has steered away from their “pound the rock” ways from years past with Jay Gruden in the fold. Gruden has always been an underrated play-caller and he’s been a good stylistic fit with Gardner Minshew. If this type of passing volume keeps up, DJ Chark will have many more big games down the line and other ancillary players will have chances to splash, too.

The Bengals remain one of the most pass-heavy teams in the league. We’ll see if that changes after Joe Mixon carried them to a win over Jacksonville last week, although Zac Taylor can certainly do much better deploying his back as a receiver. Either way, expect the passing volume in Cincinnati to remain high, which is a big development now that Tee Higgins (No. 1 in routes run for the Bengals Weeks 3-4) looks like he’s established as the top outside receiver.