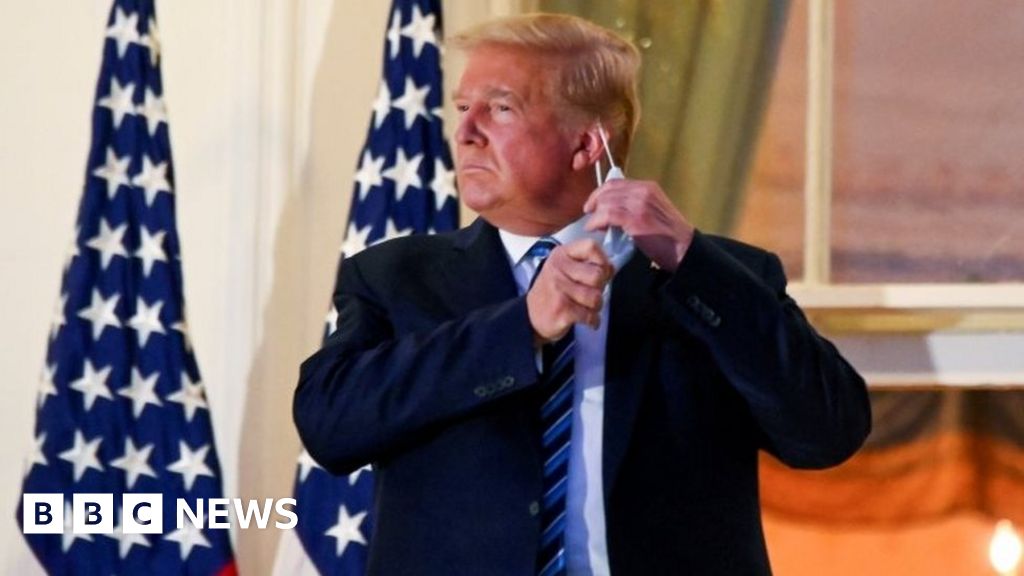 President Donald Trump has had no Covid-19 symptoms for 24 hours and has been fever-free for more than four days, his doctor says.

Sean Conley said the president also had “detectable levels of Covid antibodies” and had not needed any supplemental oxygen since he was taken to hospital.

Mr Trump, who went to hospital on Friday and was discharged on Monday, said: “I feel great!”

The news comes ahead of the key vice-presidential TV debate later.

Wednesday’s debate between Mike Pence and Kamala Harris is one of the most eagerly anticipated in years.

Many observers branded the first presidential TV debate between Donald Trump and Democratic challenger Joe Biden as “ugly” and “chaotic”. Very little on policy was aired as the debate, on 29 September, descended into interruptions and insults.

Mr Trump’s supporters say that he has shown leadership since his release from hospital on Monday. His opponents say his behaviour has become increasingly erratic.

The White House has also set out new safety measures after President Trump’s return from hospital and the news that another aide had Covid-19.

The presidential election is on 3 November. One key issue in the run-up is a coronavirus stimulus package for the economy. Mr Trump appeared to abandon negotiations with the Democrats on Tuesday, only to say later he would agree to some measures individually.

What is in the latest health report?

The report from Dr Conley said: “His physical exam and vital signs, including oxygen saturation and respiratory rate, all remain stable and in normal range.”

“We’ll continue to closely monitor and I will update you as I know more,” the doctor said.

The body makes antibodies to help fight the infection, and coronavirus antibodies in the blood indicate a person has had the virus. However, it remains unknown whether their presence will prevent the person getting the virus again.

What are the White House Covid measures?

Chief of staff Mark Meadows said on Wednesday that anyone interacting with Mr Trump has been wearing “full PPE, masks, goggles and the like”.

A memo on Monday called for limited traffic on the first floor of the West Wing and at the Residence, with strict measures on protection equipment and hand sanitiser for anyone within six feet (two metres) of the president.

Reports said there did appear to be much more mask-wearing at the White House, which had been criticised by many opponents for its lax attitude before Mr Trump’s infection.

Although the names of many people who have interacted with the president and tested positive are now known, it remains unclear just how many were exposed at the White House. At least nine White House employees have tested positive but the cluster could be much higher.

Some staff have expressed concern to US media that they were exposed without their knowledge to people who were known to be infected or were at risk of being Covid-positive.

Leading Democrat Nancy Pelosi said the White House was “one of the most dangerous places in the country”, adding she would “not go anywhere near it”.

Mr Trump himself remains in defiant mood. He has reportedly angled for an address to the nation, a return to work at the Oval Office and a resumption of campaign activity.

There were conflicting reports on Wednesday about whether Mr Trump had already gone back to the Oval Office. White House economic adviser Larry Kudlow said the president had made such a visit but other officials said this was not true.

What have Trump and Biden been saying?

The president sent out a huge flurry of tweets on Wednesday on a wide range of subjects.

In his latest insult about his challenger, he said Mr Biden was “a wacko for years, and everyone knows it. Notice how all of the bad things, like his very low IQ, are no longer reported? Fake News!”

He also said Democrats wanted to “shut churches down permanently”.

Joe Biden send out a tweet saying that as president he would “implement nationwide mask mandates, ensure access to regular, reliable and free testing, and accelerate the development of treatments and vaccines”.

“I won’t waste any time getting this virus under control,” he said.

Opinion polls over the past week have suggested Mr Biden has a lead of between eight and 12 percentage points nationwide.

What about the economy?

On Tuesday, Mr Trump said he was ending negotiations with the Democrats over a Covid-19 relief bill and would only resume talks after the election.

After a negative stock market reaction, Mr Trump said he would support some stand-alone bills, later tweeting: “Move fast, I am waiting to sign!” a bill for $1,200 (£930) stimulus cheques to the American people.

Mr Meadows said there were about “10 things that we can do on a piecemeal basis”.

She reportedly was in talks with Treasury Secretary Steven Mnuchin on Wednesday on the possibility of a bill to aid US airlines.

What lies in store for the VP candidates?

It is usually seen as a bit of a sideshow, but this time the TV debate between Kamala Harris and Mike Pence promises to be like no other.

Ms Harris, a tough interrogator, is attempting to become the first female vice-president in history.

Mr Pence is just as tough in debating and rarely puts a foot wrong.

But many will be thinking about the two presidents – the two oldest candidates in history – and who would be best suited to step up if necessary.

Plexiglass will be used to separate Mr Pence and Ms Harris when they debate in Salt Lake City, Utah. Both candidates have recently tested negative for Covid.

Voters will also hope for some policy discussion after the nasty and disruptive food fight between Mr Trump and Mr Biden.

The next one of those is set for 15 October, although just what form it takes, if any, remains to be seen.

Mr Trump has vowed to be there. Mr Biden says his opponent would have to be no health concern and he will take medical advice on whether to attend.