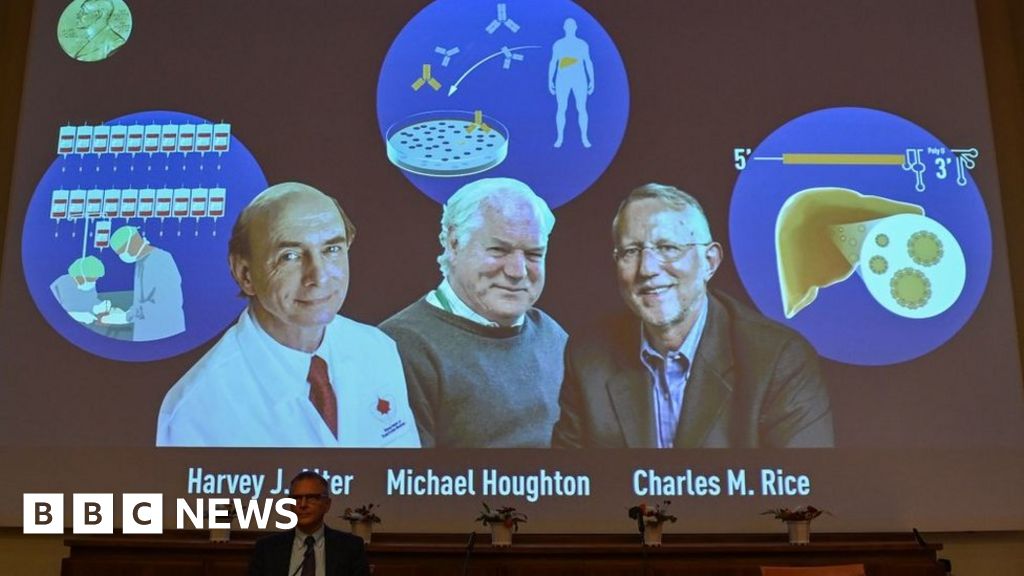 Three scientists who discovered the virus Hepatitis C have won the 2020 Nobel Prize in Medicine or Physiology.

The winners are British scientist Michael Houghton and US researchers Harvey Alter and Charles Rice.

The virus is a common cause of liver cancer and a major reason why people need a liver transplant.

In the 1960s, there was huge concern that people receiving donated blood were getting chronic hepatitis (liver inflammation) from an unknown, mysterious disease.

The Nobel Prize committee said a blood transfusion at the time was like “Russian roulette”.

Highly sensitive blood tests mean such cases have now been eliminated in many parts of the world, and effective anti-viral drugs have also been developed.

“For the first time in history, the disease can now be cured, raising hopes of eradicating Hepatitis C virus from the world,” the prize committee said.

However, the virus still infects 70 million people a year and kills around 400,000.

The viruses Hepatitis A and Hepatitis B had been discovered by the mid-1960s.

But Prof Harvey Alter, while studying transfusion patients at the US National Institutes of Health in 1972, showed there was another, mystery, infection at work.

Patients were still getting sick after receiving donated blood.

He showed that giving blood from infected patients to chimpanzees led to them developing the disease.

The mysterious illness became known as “non-A, non-B” hepatitis in and the hunt was now on.

Prof Michael Houghton, while at the pharmaceutical firm Chiron, managed to isolated the genetic sequence of the virus in 1989. This showed it was a type of flavivirus and it was named Hepatitis C.

And Prof Charles Rice, while at Washington University in St. Louis, applied the finishing touches in 1997. He injected a genetically engineered Hepatitis C virus into the liver of chimpanzees and showed this could lead to hepatitis.

Prof Thomas Perlmann, the secretary-general of the Nobel Assembly, said he could only reach Profs Alter and Rice to tell them news.

“They were definitely not sitting by the phone because I called them a couple of times before without any answer.

“But once I reached them, they were extremely surprised and they were really happy and speechless almost, so it was really fun to talk to them.”