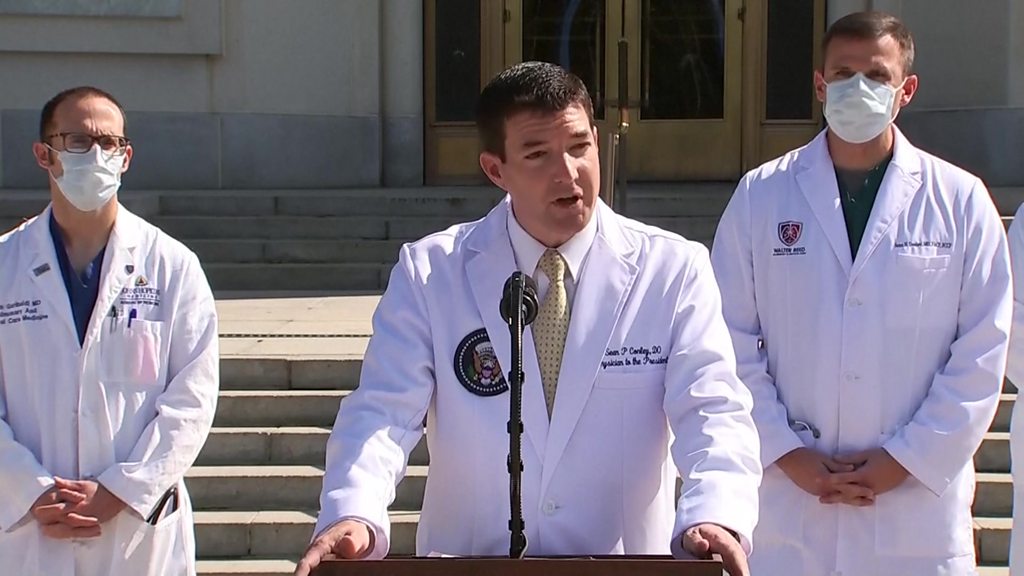 US President Donald Trump has continued to improve after his Covid-19 diagnosis and could be discharged from a hospital as early as Monday, his doctors say.

Dr Sean Conley said Mr Trump’s oxygen level dropped for a second time on Saturday, and he was started on a steroid called dexamethasone.

But it was not clear whether the president was given extra oxygen.

The president’s Covid-19 diagnosis, which he made public in a tweet early on Friday, has upended his election campaign. Mr Trump faces Democratic challenger Joe Biden on 3 November.

In a four-minute video posted on Twitter on Saturday night, the president – dressed in a suit jacket and shirt with no tie – said he was feeling “much better now” and that the next few days would be the “real test”.

A number of people around the president have tested positive, including First Lady Melania Trump. Many of them attended a crowded White House event last weekend on the nomination of Amy Coney Barrett as a Supreme Court judge. It is being scrutinised as a possible “super-spreader event”.

What else did the doctors say?

He said the first episode happened on Friday morning at the White House, and that the president was given supplemental oxygen “for about an hour”. He was flown to Walter Reed in the evening.

The news had already been widely reported in US media, and Dr Conley’s confirmation came after he refused to answer several questions from reporters about this issue on Saturday.

The second episode happened on Saturday, but he did not specify when. When questioned, he did not say whether the president had received oxygen but added that, if it had happened, “it was very limited”.

After this, Dr Conley said, the team decided to give Mr Trump dexamethasone, which is shown in studies to improve survival for patients in hospital with severe Covid-19.

Steroids calm down inflammation and the immune system and are already used in conditions like arthritis and asthma as well as in some severe infections. The drugs are not thought to be helpful in the early stages of a coronavirus infection.

“Given the timeline where [Mr Trump] is in the course of illness, we’re trying to maximise everything that we can do for him… We decided that in this case the potential benefits early on in the course probably outweighed any risks at this time,” Dr Conley said.

Dr Conley also addressed a conflicting account about the president’s health given shortly after his briefing on Saturday by the White House chief of staff. Mark Meadows said Mr Trump’s vital signs over the previous 24 hours had been “very concerning” and that the next 48 hours would be critical.

“I think his statement was misconstrued,” the doctor said.

However, he acknowledged giving an overly upbeat description of Mr Trump’s condition a day earlier: “I didn’t want to give any information that might steer the course of illness in another direction. And in doing so, you know, it came off that we were trying to hide something, which wasn’t necessarily true.”

Who else around the president has tested positive?

Aside from the president and the first lady, at least six other people who attended the Rose Garden event for Amy Coney Barrett are now confirmed to have the virus.

Other people to have tested positive around Mr Trump include close aide Hope Hicks – believed to be the first to show symptoms – campaign manager Bill Stepien and former White House counsellor Kellyanne Conway.

Nicholas Luna, the latest person reported to have tested positive, is a personal assistant or “body man” of the president. He is in constant contact with Mr Trump, handling his papers.