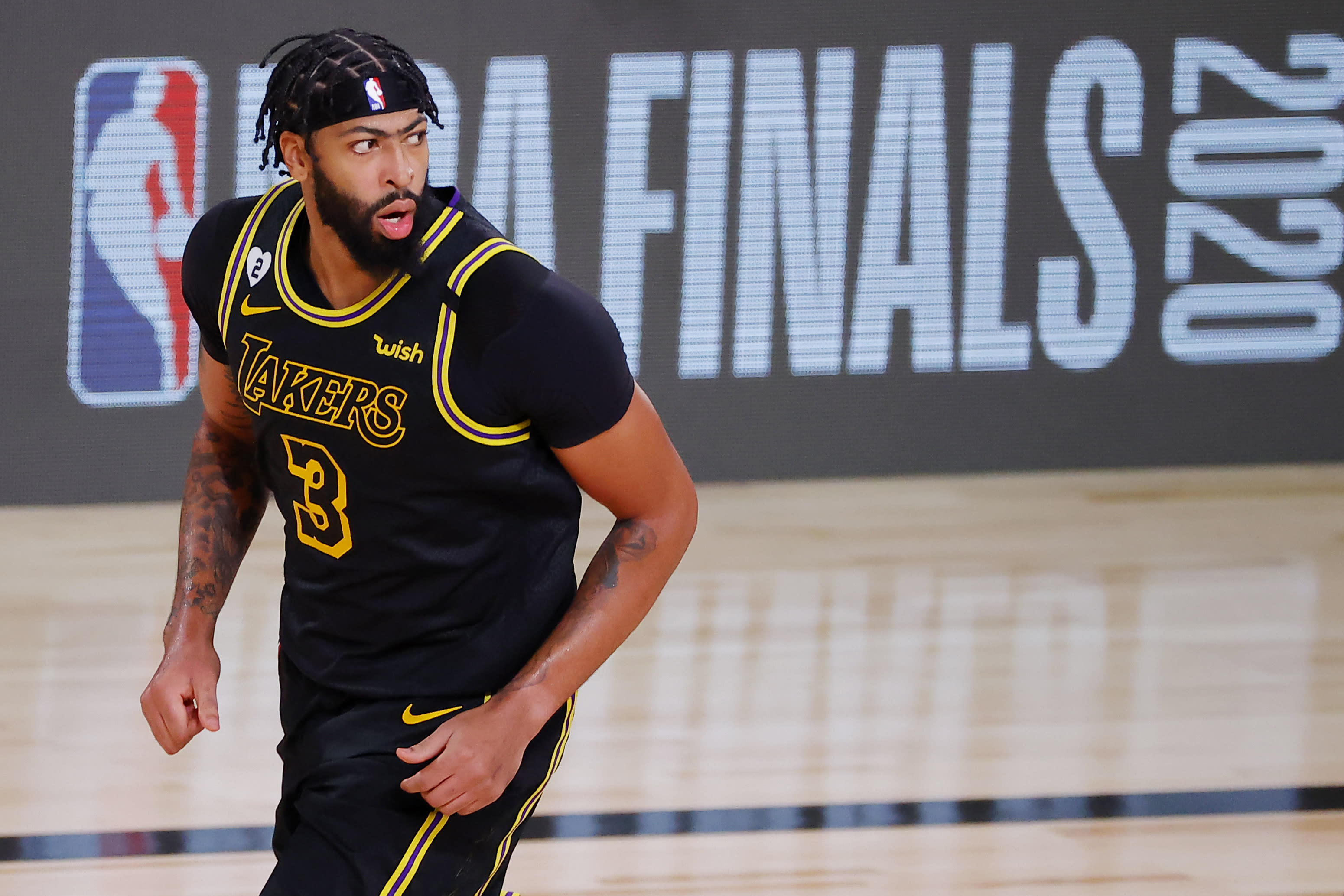 The Miami Heat should only feel so bad, as this bubble exhibition has shown to be Anthony Davis’ personal playpen.

There is no answer for him on the floor through the first two games of the NBA Finals. Actually, with all due respect to Allen Iverson, Davis is the answer.

The answer to “the one man who can torch P.J. Tucker.”

At the very least, the answer to anyone wondering who the MVP is of this series thus far, which doesn’t seem likely to change over the next several days even if the Heat put together some Krazy Glue to their wounded bodies and wrestle away a game or two.

Davis has toyed with the Heat in the same manner he’s grown and matured into what’s felt like his destiny for years now, putting together a Finals performance only Shaquille O’Neal and Larry Bird can share, scoring 32 with 14 rebounds on 75% shooting.

The Lakers’ 124-114 win seemed more methodical than climactic, which usually happens when the big men take their rightful place around the basket and deliver the inevitable to a helpless opponent. The only reason this doesn’t feel like a fait accompli is because Miami’s answer to adversity is “do everything better, harder, tougher” because we all know lesser teams would’ve submitted.

But Miami’s bigs can’t grow in the next 48 hours, meaning this looks like Davis’ championship to lose.

When the Lakers’ offense stalled in the second half, it was simply because they were intent on putting up the most triples in Finals history as opposed to going to what had led them to an 18-point lead — the only reason Davis didn’t put up 40 was that he only got up 20 shots.

Defending him seems so futile — like Tommy Hearns’ long-armed jab keeping so many away in his heyday — Davis’ length keeps you at bay and on your toes. It’s the same way the Lakers kept the hard-charging, hard-playing Heat from truly making things interesting in the absences of Goran Dragic and Bam Adebayo, who told Yahoo Sports’ Chris Haynes he would play in Game 3.

It’s easy to run out of gas when you’re being bludgeoned by the likes of Davis and Dwight Howard, taking the Heat’s legs and removing the snap from their best punches. The cliche is Davis is too quick for bigger defenders, too big for the light of foot. But in reality, his first step beats the quick guys and his strength does just enough against the powerful.

He’s a super cyborg, fully unleashed and now armed with the knowledge that his best performances won’t come in vain, that he can do it on the highest stage against the best competition and come out on top.

“His mindset is he wants to be a champion, you know, and he’s extremely motivated to play at a high level and you’re seeing it every time he steps on to the floor,” Lakers coach Frank Vogel said. “Obviously defensively, he’s a unicorn, in my opinion, Defensive Player of the Year. But his shot-making, the many ways that he can hurt you offensively in the post …very unique.”

That physical dominance has usually belonged to James, who’s transformed his game again to make the best use of this roster at his advanced mileage but now that space feels like Davis’.

So many superlatives are said about James and almost all of them apply, but while there seems to be some whisper campaign to crown him as GOAT should the Lakers pull off this championship feat, his teammate is challenging him for a place on the mountaintop of today.

First, it was Markieff Morris, crowning Davis as best in the game after Game 1. Following Game 2, it was Rajon Rondo, his former teammate in New Orleans who’s with him now on the Lakers.

“I expect him to get 50 every night … he’s so versatile,” Rondo said. “He damn near playing like the best player in the game, hands down.”

If one were to raise a hand and say James is still the last man standing, it’s hard to argue. And with this Laker duo each scoring 30 in a Finals game for the first time since O’Neal and Kobe Bryant did it in 2002, it brings up words O’Neal said about Bryant a year prior — when the Lakers ran through the 2001 playoffs with a 15-1 mark.

“I think he’s the best player in the league, by far,” O’Neal said following the Western Conference Finals opener. “I told Kobe that he was my idol. I’m serious. He’s playing phenomenal.”

It doesn’t quite fit in the Shaq-Kobe story, but it was O’Neal’s ultimate respect: It was O’Neal who was the reigning MVP from the 2000 season and was putting together his most dominant postseason run of his own, yet giving his young teammate the validation he so craved following a critical playoff win.

Only Tim Duncan then could nudge his way into the conversation then as the best player in the world, but the Lakers of the millennium could’ve had No. 1 and No. 2 — with this postseason possibly serving as Exhibit A for history repeating itself for the first time since, unless a healthy Kevin Durant comes on a revenge tour next season.

It’s safe to say Davis’ complete game is on James’ level like Kobe pulling himself up to Shaq — and not because James has slipped enough for Davis to catch him — but Davis has elevated himself into a true bonafide franchise player who can control a game on both ends and be just as feared, if not more.

It feels like Davis’ moment, like the beginning of a run where, armed with a Finals MVP and being a made man will turn him into an 82-game unstoppable monster for the next several years, the sun to which everything revolves around.

At a point in Laker lore, Magic Johnson took over when Kareem Abdul-Jabbar started slowing down, coaxing a couple more championships while the big fella etched his name into the history books headed toward age 40.

Shaq and Kobe couldn’t have that peaceful transition, too strong-willed to cede space and one had to go.

James has made it so his situation will be more of the former than the ladder, as perhaps he quietly knows the answer to the game’s best player is Anthony Davis, the 2020 NBA Finals MVP.