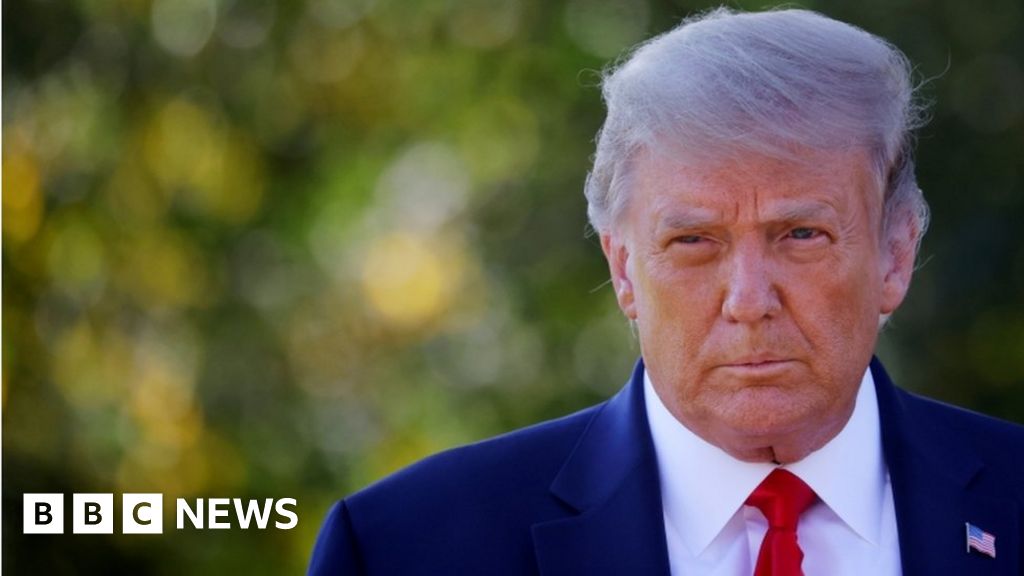 US President Donald Trump is being taken to hospital less than 24 hours after testing positive for coronavirus.

The White House said the decision to transport him to Walter Reed National Military Medical Centre was taken “out of an abundance of caution”.

Mr Trump began exhibiting “mild symptoms” of Covid-19 on Thursday after disclosing that he and his wife had gone into quarantine late Wednesday.

The White House said he was feeling “fatigued but in good spirits”.

Mr Trump’s symptoms include a low-grade fever, according to the BBC’s US partner, CBS News.

The presidential helicopter, Marine One, is currently on the White House lawn waiting to transport him.

The news comes just over a month before presidential elections, where he will face Democratic challenger Joe Biden.

A White House spokesperson said in a statement: “President Trump remains in good spirits, has mild symptoms, and has been working throughout the day.

“Out of an abundance of caution, and at the recommendation of his physician and medical experts, the president will be working from the presidential offices at Walter Reed for the next few days.

“President Trump appreciates the outpouring of support for both he and the first lady.”

Walter Reed, in the Washington DC suburbs, is one of America’s largest and most renowned military medical centres. It is where US presidents usually go for their annual check-ups.

Under the US constitution, if Mr Trump did become too ill to carry out his duties, he could hand over his powers to the vice-president temporarily. That means Mike Pence would become acting president until Mr Trump was fit again and could reclaim his position.

The US presidential election has been turned on its head.

That sentence could have been written about any number of moments in a tumultuous year in American politics, but nothing quite like this has occurred this year, this decade, this century.

Just 32 days before the presidential election, Donald Trump has tested positive for Covid-19. Given his age, 74, he is in a high-risk category for complications from the disease. At the very least, he will have to quarantine while he is treated, meaning the US presidential contest – at least his side of it – has been fundamentally altered.

The initial implications are obvious. The president’s rigorous campaign schedule – which included visits to Minnesota, Pennsylvania, Virginia, Georgia, Florida and North Carolina in just the past week – is on indefinite hold.

Trump will certainly have surrogates on the trail for him, but given that he has relied heavily on his family and senior administration and campaign officials for such tasks in the past, and many of them may have to quarantine because of their own exposure to the virus, that campaign operation will be disrupted as well.

Mr Trump’s physician Sean Conley said in a statement earlier on Friday that the president had “as a precautionary measure received an 8g dose of Regeneron’s polyclonal antibody cocktail” at the White House. The medication is administered to help reduce virus levels and speed recovery.

“As of this afternoon he remains fatigued but in good spirits,” he added. The first lady was “well with only a mild cough and headache”.

Mr Biden himself and his wife Jill tested negative on Friday.

“I hope this serves as a reminder,” the Democratic White House candidate tweeted after the result. “Wear a mask, keep social distance, and wash your hands.”

Mr Biden’s staff said he would travel to Michigan on Friday as planned for several campaign events. He and his wife have wished the presidential couple a speedy recovery.

Officials said the process of tracking all the president’s contacts in recent days was ongoing, adding that Mr Trump was considering how he might address the nation or otherwise communicate with the American people on Friday.

But he pulled out of a video conference call with vulnerable seniors scheduled for Friday, leaving Vice-President Mike Pence to chair the meeting.

On Thursday, the first couple said they intended to self-isolate after one of Mr Trump’s closest aides, Hope Hicks, tested positive. Soon afterwards, they too received positive test results.

There has been criticism of Mr Trump’s decision to go to a fundraiser attended by dozens of people in New Jersey on Thursday, apparently when officials already knew about Ms Hicks’ symptoms.