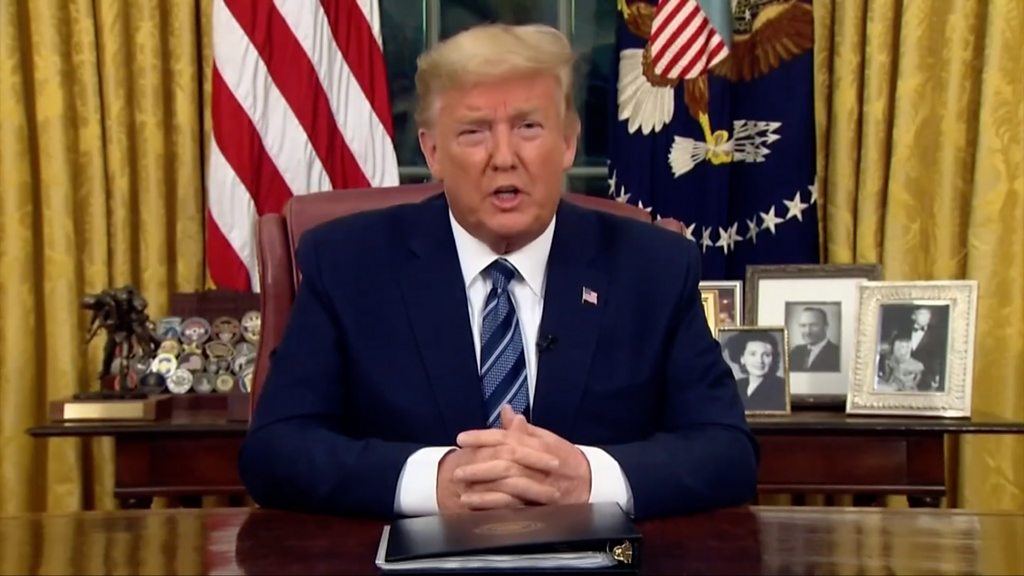 US President Donald Trump has mild symptoms of Covid-19 after he and his wife Melania tested positive for the coronavirus, the White House says.

Mr Trump’s chief of staff said the president was “on the job” and “in good spirits”, adding that he expected him to make a quick recovery.

The news comes just over a month before presidential elections, where he will face Democratic challenger Joe Biden.

Mr Biden himself and his wife Jill tested negative on Friday.

“I hope this serves as a reminder,” he tweeted after the result. “Wear a mask, keep social distance, and wash your hands.”

Mr Biden’s staff said he would travel to Michigan on Friday as planned for several campaign events.

Other close members of Mr Trump’s family have tested negative.

Officials said the process of tracking all the president’s contacts in recent days was ongoing, adding that Mr Trump was considering how he might address the nation or otherwise communicate with the American people on Friday.

But he pulled out of a video conference call with vulnerable seniors scheduled for Friday, leaving Vice-President Mike Pence to chair the meeting.

On Thursday, the first couple said they intended to self-isolate after one of Mr Trump’s closest aides, Hope Hicks, tested positive. Soon afterwards, they too received positive test results.

But there has been criticism of Mr Trump’s decision to go to a fundraiser attended by dozens of people in New Jersey on Thursday, apparently when officials already knew about Ms Hicks’s symptoms.

Ms Hicks, 31, travelled with Mr Trump on Air Force One to the first presidential TV debate with Mr Biden in Ohio on Tuesday. Some of Mr Trump’s family members who attended the debate were seen not wearing masks.

Mr Trump has mostly spurned mask-wearing and has often been pictured not socially distanced with aides or others during official engagements.

The coronavirus has infected more than 7.2 million Americans, killing more than 200,000 of them.

What do we know about Trump’s condition?

White House Chief of Staff Mark Meadows said Mr Trump was experiencing mild symptoms, but that he and Melania were “in good spirits”. He said he was optimistic the president would make a speedy recovery.

He was on the job and would remain on the job, Mr Meadows added, saying updates on his health were expected later on Friday.

Earlier Mr Trump wrote on Twitter: “We will get through this together.”

Melania Trump tweeted that she was looking forward to a speedy recovery.

“Thank you for the love you are sending our way. I have mild symptoms but overall feeling good,” she said.

Mr Trump’s physician, Dr Sean Conley, released a statement late on Thursday, saying the president and the first lady were “both well at this time, and they plan to remain at home within the White House during their convalescence”.

According to Mr Trump’s most recent physical examination earlier this year, he weighed 244lbs (110.7kg). This is considered to be obese for his height of 6ft 3ins.

But Dr Conley stated at the time that the president “remains healthy”. Mr Trump will also have the best medical care available.

America’s Centers for Disease Control and Prevention (CDC) says a person must self-isolate for 10 days after a positive test.

It is not clear how Mr Trump’s positive test will affect arrangements for the second presidential debate, which is scheduled for 15 October in Miami, Florida.

Mr Trump is not the first world leader to have tested positive. Earlier this year, British Prime Minister Boris Johnson and Brazil’s President Jair Bolsonaro were infected. They both have since recovered, although Mr Johnson had to receive regular oxygen treatment to help his breathing during hospitalisation.

Contest has been fundamentally altered

The US presidential election has been turned on its head.

That sentence could have been written about any number of moments in a tumultuous year in American politics, but nothing quite like this has occurred this year, this decade, this century.

Just 32 days before the presidential election, Donald Trump has tested positive for Covid-19. Given his age, 74, he is in a high-risk category for complications from the disease. At the very least, he will have to quarantine while he is treated, meaning the US presidential contest – at least his side of it – has been fundamentally altered.

The initial implications are obvious. The president’s rigorous campaign schedule – which included visits to Minnesota, Pennsylvania, Virginia, Georgia, Florida and North Carolina in just the past week – is on indefinite hold.

Trump will certainly have surrogates on the trail for him, but given that he has relied heavily on his family and senior administration and campaign officials for such tasks in the past, and many of them may have to quarantine because of their own exposure to the virus, that campaign operation will be disrupted as well.

So far, the vast majority of released test results have been negative. No-one can be sure who caught the virus first among these leading US political figures and their relatives, or who passed it to whom, or where they caught it.

How have the US and the world reacted?

In a tweet, Vice-President Pence and his wife Karen wished the presidential couple well:

Karen and I send our love and prayers to our dear friends President @realDonaldTrump and @FLOTUS Melania Trump. We join millions across America praying for their full and swift recovery. God bless you President Trump & our wonderful First Lady Melania.

For their part, Mr Biden and his wife wished the first couple a swift recovery: “We will continue to pray for the health and safety of the president and his family,” he said.

Boris Johnson wrote on Twitter: “My best wishes to President Trump and the First Lady. Hope they both have a speedy recovery from coronavirus.”

Other world leaders, including the prime ministers of India and Israel, also sent messages of support.