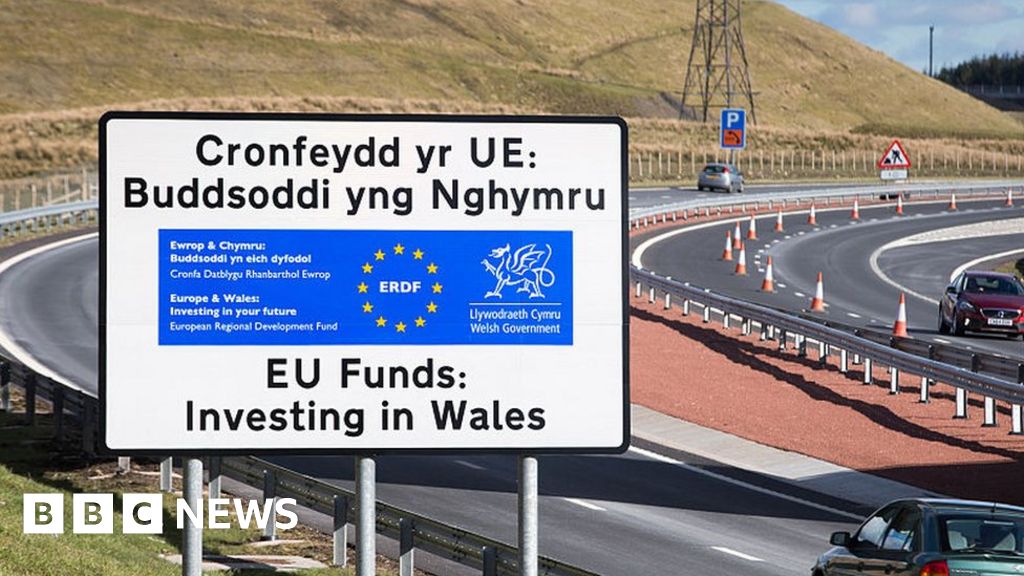 “Negligible” progress has been made by the UK government to replace EU funds in Wales after Brexit, according to a committee of cross-party MPs.

Parliament’s Welsh Affairs Committee said the absence of detailed plans to replace £375m a year in European funding showed a “lack of priority”.

The UK government said details of the programme “are being developed”.

Currently, Wales and other nations in the European Union receive EU Structural Funds to support economic development – such as infrastructure, businesses and skills – with poorer regions receiving greater investment.

With higher levels of economic deprivation, Wales received five times more in funding per person than England between 2014 and 2020.

This funding is coming to an end as the UK has now left the EU and the Brexit transition period finishes on 31 December.

In 2017, UK government ministers pledged to introduce measures to replace the EU cash, known as the Shared Prosperity Fund.

But a new report published by the Welsh Affairs Committee warns, with just three months to go until the end of the transition period, “there is still no substantive detail from UK ministers about their plans and a range of issues remain unsolved”.

Conservative, Labour and Plaid Cymru MPs have called for “urgent reassurance” on the new fund to avoid a “cliff-edge to EU funds from January 2021”.

They also want a “firm date” for when substantive information about the fund will be made available – including what it will look like, how it will be funded and who will control it.

The committee has set out their key priorities for the fund, including asking for the money to be “needs-based” and “at least the current size of funding in real terms”.

MPs also recommended the fund should be administered in co-operation and as a partnership between the UK government, the parliaments in Scotland and Wales, the Northern Ireland Executive, and local authorities.

The committee also said it wanted the funding to be made over an extended period of years to allow “effective planning and delivery”.

Committee chairman, Preseli Pembrokeshire MP Mr Crabb, said “we found that the government hasn’t made anything like sufficient progress in terms of developing clear policy for replacing European funding at the end of this Brexit transition in less than three months’ time – and that’s unacceptable.”

He added that the committee felt “very, very strongly the UK government now needs to up its game”.

“For the last 20 years, Wales has qualified for European funding because its one of the poorest parts of the EU.

“Many organisations in Wales have been relying on EU funds in recent years for training programmes, skills programmes, they could find themselves at the end of the year without any funding at all if the government doesn’t do what it said it was going to do and bring forward a replacement fund and be clear about how it is going to be run, and how it’s going to be administered.”

“Our big worry is that as we take the programme and the money out of Brussels and it is channelled through Westminster. At some point along the way the Westminster government will start to get its hands on it, and start using it for purposes that its not really supposed to be used for,” he said.

What do UK ministers say?

A UK government spokesman said: “The UK Shared Prosperity Fund will be better targeted than the EU Structural Funds and, as a minimum, will match the size of those funds in each nation and help to level up the entire UK.

“Details of the programme are being developed and we will continue to work on it in collaboration with the devolved administration in Wales.

“We are conscious the EU funding will start to scale down in April 2021 and phased over the next three years, and details of the UKSPF will be published well ahead of this date.

“We thank the committee for the report and will respond to the recommendations in due course.”