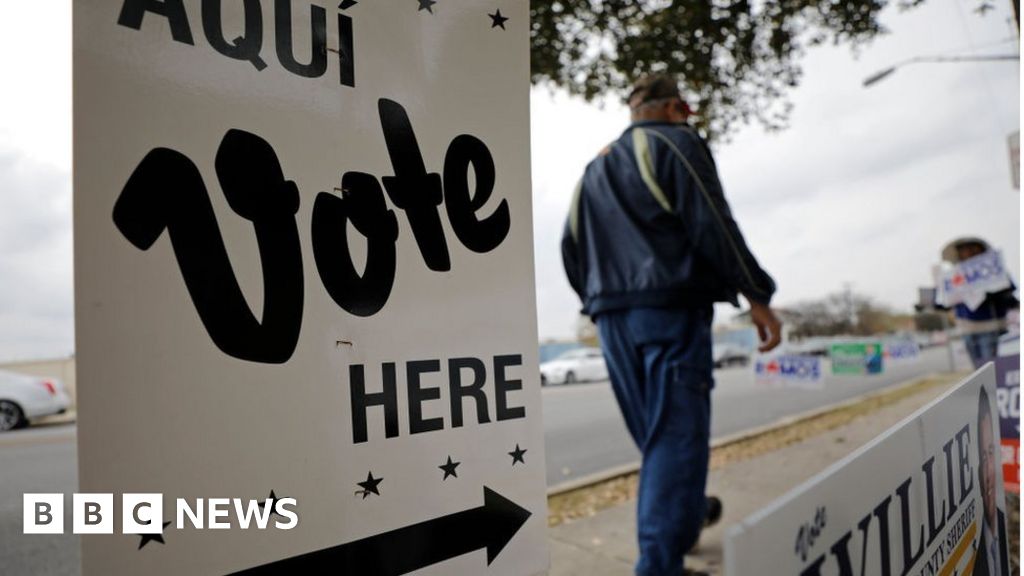 Texas’ governor has ordered that voters can drop off their mail-in ballots at only one location per county in the lead-up to the presidential election.

Critics have accused Mr Abbott of voter suppression, pointing out that in some cases this means thousands of voters must go to one clerk’s office.

Coming weeks before the election, the order requires counties to close any satellite ballot drop-off locations.

Texas is the second most populous US state and it would be a big win for candidates during the 3 November election. The state has been reliably Republican in modern presidential contests.

Many more voters this time around are expected to vote by post or drop off their ballots due to the pandemic.

Mail-in voting protocols differ slightly state by state, but in Texas, eligible early voters can begin dropping off their ballots this month.

Some of the state’s largest counties had already set up multiple drop-off sites. Harris County, home to the city of Houston and some four million residents, must now close 11 drop-off locations, the Houston Chronicle reported.

In addition to raising questions about how potentially millions of urban Texans will need to visit a single drop-off site, the move may also be problematic for rural residents, who are spread out across the state – which is also America’s second largest by area.

The order goes into effect on Friday.

In a statement following the order on Thursday, Mr Abbott cited Covid-19 in calling for strengthening ballot-security protocols.

“These enhanced security protocols will ensure greater transparency and will help stop attempts at illegal voting.”

Numerous nationwide and state-level studies over the years have revealed no evidence of major, widespread fraud in postal voting.

Texas Democratic chairman Gilberto Hinojosa responded to the announcement by accusing “scared” Republicans of trying to change rules while “on the verge of losing”.

Mr Hinojosa added that courts across the US have said it is too late to make changes to election rules, “but our failed Republican leadership will try anyway”.

The proclamation by Mr Abbott will cause “widespread confusion and voter suppression”, said Harris County clerk Chris Hollins in a statement. Harris County, which encompasses Houston, is the most populous county in the state.

Poll watchers are individuals who can keep an eye out for any violations of election law at the polling location and during the tallying process. They cannot intimidate voters or speak to them.

President Donald Trump has urged his supporters to become poll watchers while suggesting the election could be rigged.

It’s difficult to grasp exactly how large the state of Texas is. There are counties in the west as big as small US states. The Dallas-Fort Worth area has a population larger than a dozen European nations. It has an economy roughly the size of Russia’s.

Texas also has some of the lowest turnouts in elections in the nation, with just 46.5% of the voting-age population casting ballots in 2016.

Those figures aren’t going to be improved by Governor Abbott’s decision to mandate only one ballot-drop-off location per county throughout the state. It will be a burden in populous areas like Houston, where traffic and density makes travel slow, and out west, where vast open spaces make it arduous.

The state does have a robust early-voting system, but with concerns about in-person balloting during the Covid-19 pandemic, at-risk Texas might prefer to limit exposure.

Those on the left will see Mr Abbott’s decision, combined with other Republican efforts to limit absentee voting – particularly in urban areas that are trending Democratic – as an attempt to prevent their party from winning key state-level elections or, perhaps, even voting for a Democratic presidential candidate for the first time since 1976.

What questions do you have about the US election?

The US election process can be confusing. The BBC is here to help make sense of it. Please put your questions below.

If you can’t see the form, you may need to view the site on a desktop.

In some cases, your question will be published, displaying your name, age and location as you provide it, unless you state otherwise. Your contact details will never be published. Please ensure you have read our terms & conditions and privacy policy.