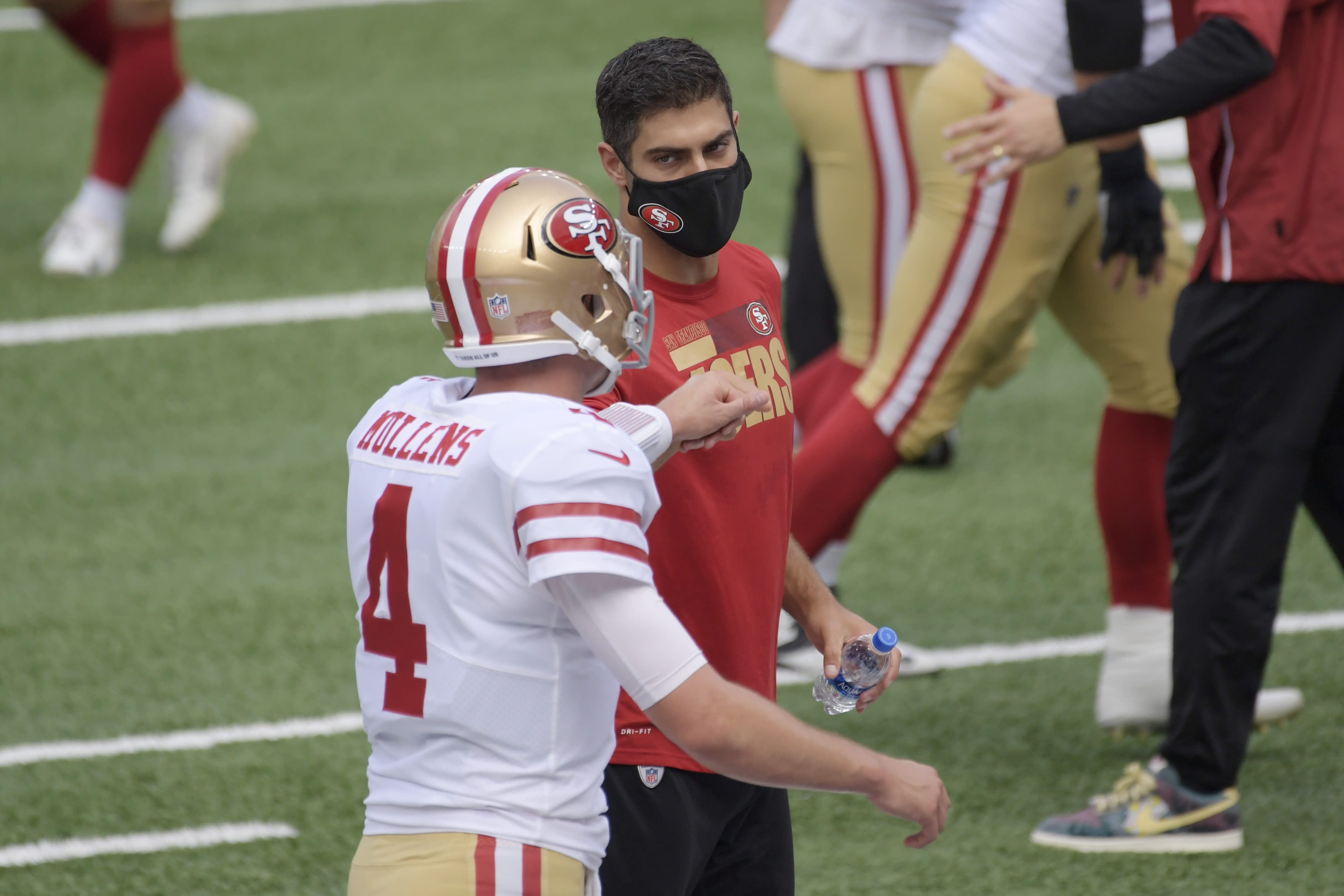 No football coach wants a quarterback controversy in the middle of a season, which is why it made sense to hear the San Francisco 49ers’ Kyle Shanahan quickly strike down any sniff of one this week.

Coming off a strong performance in a Week 3 beatdown of the New York Giants, could Nick Mullens unseat Jimmy Garoppolo (out with a high ankle sprain) as the team’s full-time starter?

“No, that scenario doesn’t exist,” Shanahan said Wednesday. “But I don’t think past one game either. That’s for you [the media] to do. This is Jimmy’s team. He’s done a hell of a job for us and when he’s healthy, he’ll be playing again for us.”

OK, fair enough. It would be unfair to hand the keys to Mullens after one good game against a bad Giants team.

Garoppolo has yet to practice this week, which means there’s a good chance he’ll miss at least another game as the Niners host the Philadelphia Eagles on Sunday night. That’ll be another shot for Mullens to prove his 343-yard, one-touchdown, zero-interception performance on Sunday wasn’t a fluke.

And what if Garoppolo’s ankle doesn’t heal well and he’s out another three or four games and Mullens continues to light it up and lead the Niners to more wins? Will Shanahan be so quick to declare it Jimmy’s team then?

With one of the strongest rosters in the NFL and the championship window open, the fourth-year head coach should be open to anything that could help the team get over the hump.

No job is truly safe

Surely, 49ers fans know that even great quarterbacks can lose their jobs to younger, more promising talent because of poorly timed injuries.

Lest we forget the awkward and contentious end to Joe Montana’s tenure with San Francisco. When Montana missed most of the 1991 and 1992 seasons with elbow injuries, Steve Young stepped in and played at a high level. He won MVP in ’92, which put the 49ers locker room in an ugly QB controversy once Montana was healthy. The team traded Montana to Kansas City.

That was a Hall of Famer who won four Super Bowls with the team.

This is Jimmy Garoppolo, a player with one full season as a starter under his belt.

And sure, that one season was impressive. He led San Francisco to a 13-3 record and a Super Bowl appearance last season, nearly winning the thing before it all fell apart in the fourth quarter.

So how could a guy like that be in danger of losing his job? A lot may depend on what we see from Mullens and whether Garoppolo can stay healthy.

Who has the edge?

How good is Mullens? What we’ve seen in a limited sample is a solid but not spectacular 25-year-old.

He played the final eight games of San Francisco’s 2018 season after Garoppolo suffered a season-ending knee injury and then-backup C.J. Beathard hurt his wrist in Week 8.

Mullens threw for 2,277 yards and 13 touchdowns against 10 interceptions in that stretch. The 49ers went 3-5 in those games, though that was a far worse defensive team than today’s version. His 51.7 rating in ESPN’s total QBR ranked 21st in the NFL and he landed in the “backup” category with a 64.6 grade in Pro Football Focus.

Garoppolo also had a better interception rate (2.7 percent) in 2019 vs. Mullens in 2018 (3.6), and played better against the blitz. When opponents brought extra pressure, Garoppolo’s QB rating was 92.9 last year while Mullens was 88.9 under the same circumstances a year earlier.

To be fair to Mullens, he was a second-year player in 2018 after going undrafted and spending 2017 on the Niners’ practice squad. Garoppolo is 28 and is playing his seventh year in the NFL.

Mullens says in the two years since he last played he has worked hard to learn Shanahan’s offense, and that showed this year.

He picked apart the Jets and Giants in back-to-back weeks even with a very limited selection of pass catchers as star tight end George Kittle, dynamic receiver Deebo Samuel and speedy running back Raheem Mostert all sat out with injuries.

Kittle and Samuel could return this weekend as Mullens faces his first true test of 2020: a Philadelphia defense that ranks fifth in the NFL in yards allowed and has one of the fiercest pass rushes in the league.

It’s another opportunity for Mullens to produce his Steve Young moment. Until that happens, this is clearly Jimmy’s team.