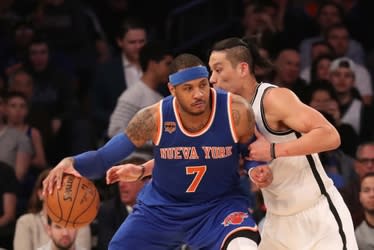 Carmelo Anthony had his ups and downs over his seven-season tenure with the Knicks, and his time at Madison Square Garden will forever be intertwined with that of Phil Jackson’s. Jackson came on as team president in 2014, following Anthony’s fourth season in New York.

Speaking on The Old Man & The Three podcast on Thursday, Anthony went into detail about why the Jackson era didn’t succeed, specially Jackson’s attempted implementation of the triangle offense.

“When Phil came, it was like, ‘I’m going to do it the way I want to do it,’” Anthony said. ‘I’ve got to bring in personnel that fit the system that I’m trying to run. This guy doesn’t fit into the triangle. I don’t want these types of guys.’ So he started slowly picking the team apart and putting in his pieces that he felt would work in the triangle.”

Personnel was an issue, Anthony explained, as players were being shoehorned into spots that didn’t fit with their style of play.

The 10-time All-Star said that Jackson did not allow for much flexibility within the triangle, and said that teams eventually knew exactly how to defend it every time the Knicks took the ball up the floor.

“When you’re playing that way for all 48 minutes, teams make adjustments, but you’re not making adjustments,” Anthony said. “You just keep playing that way. The ball will find you, right? Body movement and ball movement. That’s what it is. Wherever you pass the ball in the triangle, that dictates what happens in the offense. When you start learning that and start figuring it out from a cerebral standpoint, it’s like, if they make and adjustment we’re done. If they deny the two-guard front, we’re done. If they deny the blind pick, we’re done. So teams started to do that and get smart.

“Wherever you pass the ball, that dictates everything,” Anthony continued. “So guys are in positions that they normally wouldn’t be in. So when they get the ball, everybody stays home or everybody gets denied and now you have to make a play. And if you don’t have those playmaking abilities, you’re going to look crazy in the triangle.”

Simply put, Anthony feels that Jackson wasn’t able to institute precisely what he wanted because he wasn’t the one pushing the buttons come game time.