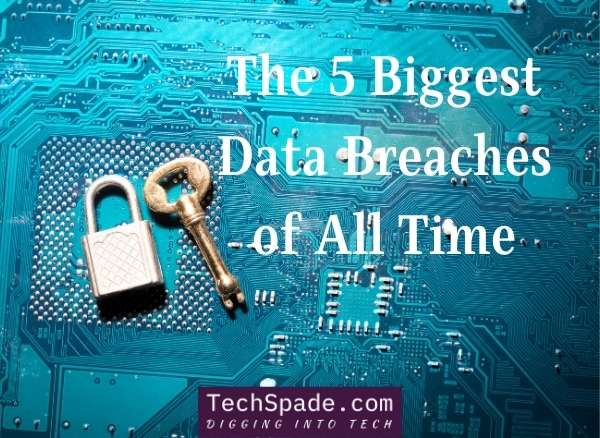 The 5 Biggest Data Breaches of All Time

How many times do you log in to your smartphone app or a website daily? Every day, there is an increase in the number of accounts and passwords – criminals and hackers try to access your accounts, leading many people to be at risk of some of the significant data breaches.

It is the best time to talk about the most significant data breaches to see how your personal data is consistently at risk of susceptibility. These breaches affected some of the critical business in the world – and a lot of their users.

Twitter asked 330 million users to changes their passwords in May 2018 after finding a glitch that made some stored passwords in a readable text on its internal system.

Although internal research found no proof that the passwords had been breached, the business advised all the social network users to change the passwords and activate the two-factor authentication service as an extra protection layer.

In May 2016, many users of MySpace, a social networking site, were told that their personal details could be accessible for online sales. The same year, Time Inc. bought this site in February and guided that 360 million accounts were breached. Though the access was dated back to June 2013, the same usernames and passwords can be used to violate the information on different websites.

Almost 412 million accounts listed across the FriendFinder Network zone, which includes Adult Friend Finder, were breached in October 2016. This hack revealed the information of users, including their membership status, IP addresses, and email addresses.

The corporation stores the passwords of users using the SHA1 algorithm or plaintext, which means cracking of 99% of passwords, as per a breach notification site, LeakedSource.

Marriott declared in November 2018 as its system of reservation had been breached, leading to the potential exposure of the credentials, including 500 million visitors.

After buying the Starwood group of hotels in 2016, Marriott recognized the hackers had illegal access to their database since 2014. That data includes the passport numbers, addresses, and names of people.

Yahoo exposed information of a data breach that accessed more than one billion people accounts in 2016. In August 2013, the attack took place. Yahoo revealed that the credential details – including names, encrypted passwords, dates of birth, telephone numbers – have been accessed.

The parent company of Yahoo, Verizon, revised the guessed upwards, explaining that around 3 billion accounts were affected, considering it as the most significant data breach.

Here on TechSpade.com we also help you to keep aware of scams (see: Best Ways To Beat Tax Scams In 2020) and how to get some things for free (see How To Get Amazon Music HD For Free), so stay with us and always be informed of our latest articles. You can follow us on LinkedIn or Facebook.

Will Raiders’ gamble on Carr-Adams bond pay off?
England drought: Everyone must rethink their water use, experts say
Egypt church fire: ‘We saved who we could’, says survivor
Ministers to meet energy giants over cost of living
Energy bill crisis is on scale of pandemic, Martin Lewis says