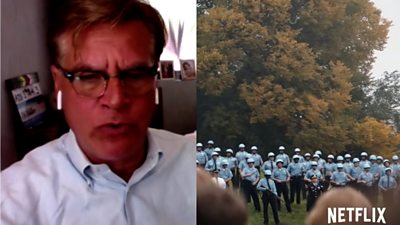 Screenwriter and director Aaron Sorkin spoke to the BBC’s Arts and Entertainment correspondent Will Gompertz about his new film and why he chose to be involved in the project..

Trial of the Chicago 7 is based on the 1968 trial of seven defendants charged by the federal government because of the protests and riots Chicago.

More than 50 die in two Pakistan accidents
Asteroid 2023 BU: Space rock passes closer than some satellites
Jerusalem synagogue attack: Seven killed in shooting
UK economy only G7 nation to shrink in 2023 – IMF
Everyone to live 15 minutes from green space or water in England under plans