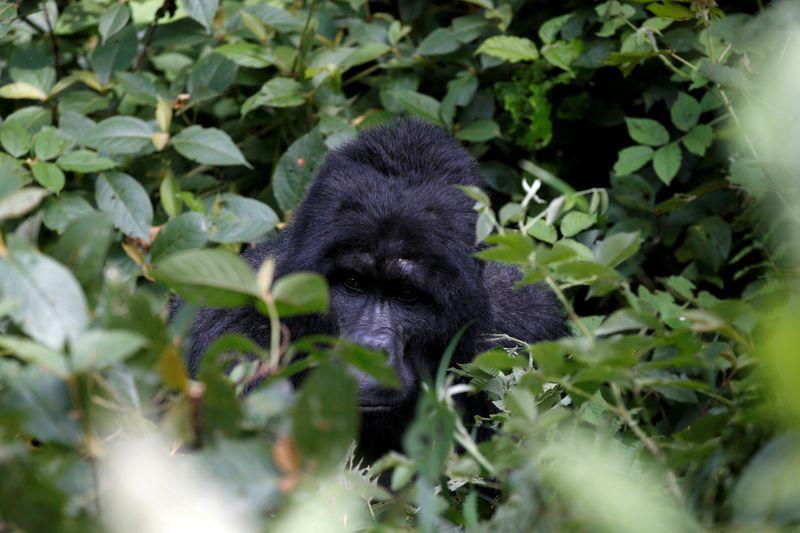 KAMPALA (Reuters) – Ugandan wildlife authorities have detained four men in connection with the killing of a 25-year-old male gorilla, the leader of a gorilla group and hugely popular with tourists.

FILE PHOTO: A silverback mountain gorilla from the Mukiza group is seen in the forest within the Bwindi National Park near the town of Kisoro, Uganda March 31, 2018. REUTERS/Baz Ratner/File Photo

The Silverback gorilla, named Rafiki, was killed in the Bwindi Impenetrable National Park after going missing on June 1. His body was found the next day.

The park, a UNESCO world heritage site near Uganda’s border with the Democratic Republic of Congo, is a 320-sq-km patch of dense tropical forest that is home to primates, elephants, antelopes and other wildlife.

Tourists are however mostly drawn to the park by its estimated 400 mountain gorillas – roughly half the world’s population.

In a statement, the state-run Uganda Wildlife Authority (UWA) said the four men were detained for their role in the death of Rafiki.

The arrests followed UWA’s investigation of Rafiki’s death “after a postmortem report revealed that the Silverback sustained an injury by a sharp device/object that penetrated its left upper part of the abdomen up to the internal organs”.

One of the detained men had been found in possession of wild hog meat, rope and wire snares and spears, the statement said.

The man “confessed to killing the gorilla in self-defense,” the statement said, adding he said it charged at him while he and a colleague were hunting.

Rafiki was head of a 17-member gorilla group called Nkuringo.

Poaching is rampant in Uganda’s game parks and police frequently announce seizures of illicitly acquired wildlife products such as ivory, rhino horns, pangolin scales and others.