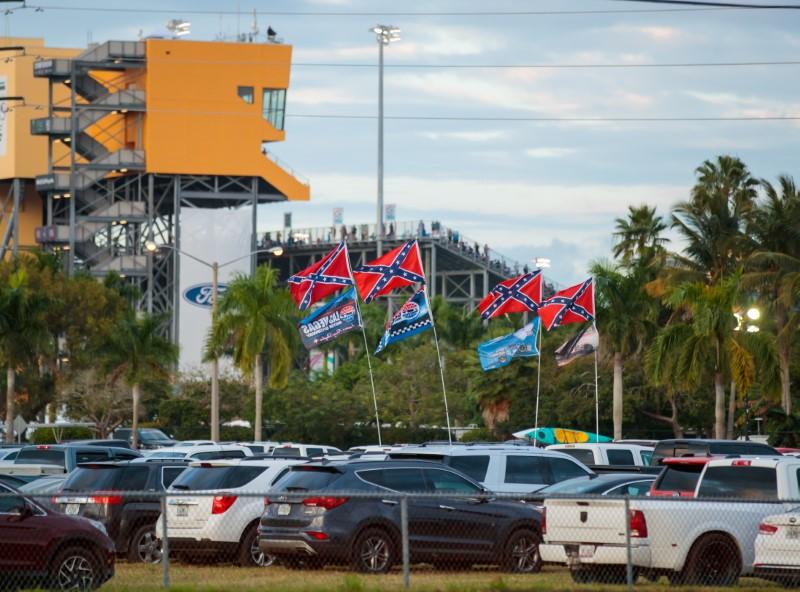 (Reuters) – NASCAR on Wednesday banned the Confederate flag from all races as the sport moved to distance itself from a checkered past on race amid global protests against the death of George Floyd while in Minneapolis police custody.

The African American man died after a white police officer kneeled on his neck for nearly nine minutes on May 25. As protests erupted, NASCAR promised to do more to address racial injustice and followed through on that with the Confederate flag ban.

While some in the South see the flag as a source of pride and a remembrance of soldiers who died fighting for the Confederacy in the 1861-65 Civil War, many Americans see it as a symbol of oppression and slavery.

“The presence of the confederate flag at NASCAR events runs contrary to our commitment to providing a welcoming and inclusive environment for all fans, our competitors and our industry,” NASCAR said in a statement.

“Bringing people together around a love for racing and the community that it creates is what makes our fans and sport special.

“The display of the confederate flag will be prohibited from all NASCAR events and properties.”

NASCAR’s decision came just hours after Bubba Wallace, the only African American driving in the NASCAR Cup Series, said he would use a #BlackLivesMatter livery on his car for a race on Wednesday night at Virginia’s Martinsville Speedway.

The Confederate flag and other symbols of the United States’ segregated past have become a flashpoint amid outrage over Floyd’s death.

The U.S. Navy and Marine Corps announced plans to remove the Confederate battle flag from all installations.

President Donald Trump waded into the controversy on Wednesday, rejecting any proposal to rename U.S. military bases that are named for Confederate leaders.

For the race in Martinsville, Wallace’s Richard Petty Motorsport Chevrolet will be painted black with a graphic of two fists, one black and the other white, locked together on the hood with the words “Compassion, Love, Understanding” underneath.

“I think it’s going to speak volumes for what I stand for, but also what the initiative that NASCAR, the whole sport, is trying to push,” Wallace said in a video posted on Richard Petty Motorsports’ Twitter account.

In an interview with CNN on Monday, Wallace had called for the removal of the Confederate flag from all NASCAR events.

NASCAR has grappled with the Confederate flag issue for several years. In 2015, it asked fans not to bring Confederate flags to races, offering to exchange them for American flags, but was largely ignored.