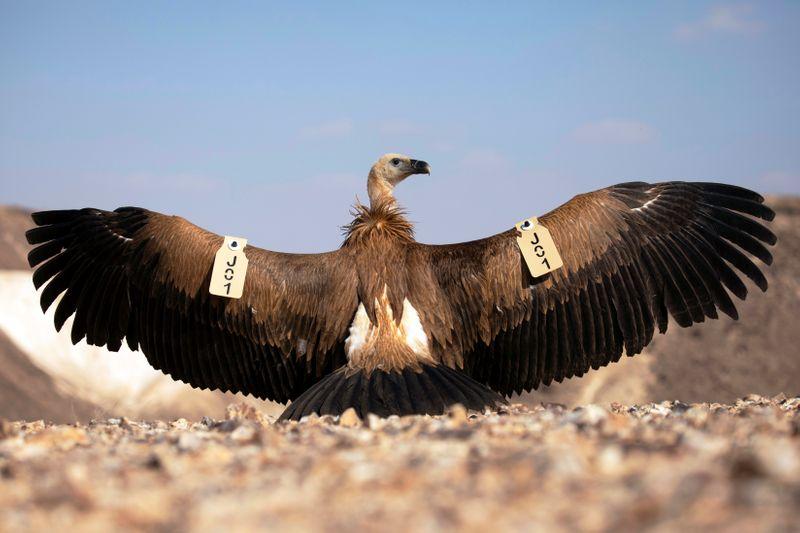 A griffon vulture spreads it wings bearing its tracking tags as it prepares to fly after it was temporarily captured as part of a national project to protect and increase the population of the protected bird in Israel, near Sde Boker in southern Israel October 29, 2019. REUTERS/Amir Cohen

CARMEL MOUNTAIN NATIONAL PARK, Israel (Reuters) – The griffon vulture is not only ungainly, smelly and endangered: it is also often denied its biblical fame by being mixed up with the eagle.

But for a network of Israeli conservationists, the bird still has pride of place in the land whose ancient prophets saw in its soaring flight a metaphor for religious exaltation.

Hit by accidental poisoning and urbanisation, Israel’s griffon vulture population has fallen to around 180 in the wild, says Yigal Miller, manager of programs for endangered raptors at the Israel Nature and Parks Authority.

So as part of the ‘Under our Wing’ project run by his organisation and the Society for the Protection of Nature in Israel, the next generation is being reared in captivity before being let loose in the desert with tracking tags.

“We raise the vulture chicks… and after several years we release them to nature,” Miller said.

Named “nesher” in Hebrew, the bird has often been mislabelled in scriptures, notably in the King James version of the English Bible, which in Exodus describes God as bearing the Israelites on eagles’ rather than vultures’ wings.

According to Israel’s Biblical Museum of Natural History, many people still feel as uncomfortable as those 17th-century translators did in identifying as a vulture a bird described in noble terms by scripture.

“The vulture is (nowadays) commonly regarded as a loathsome creature,” its website explains.

“But in the Middle East, it is the griffon vulture that is the king of birds.”