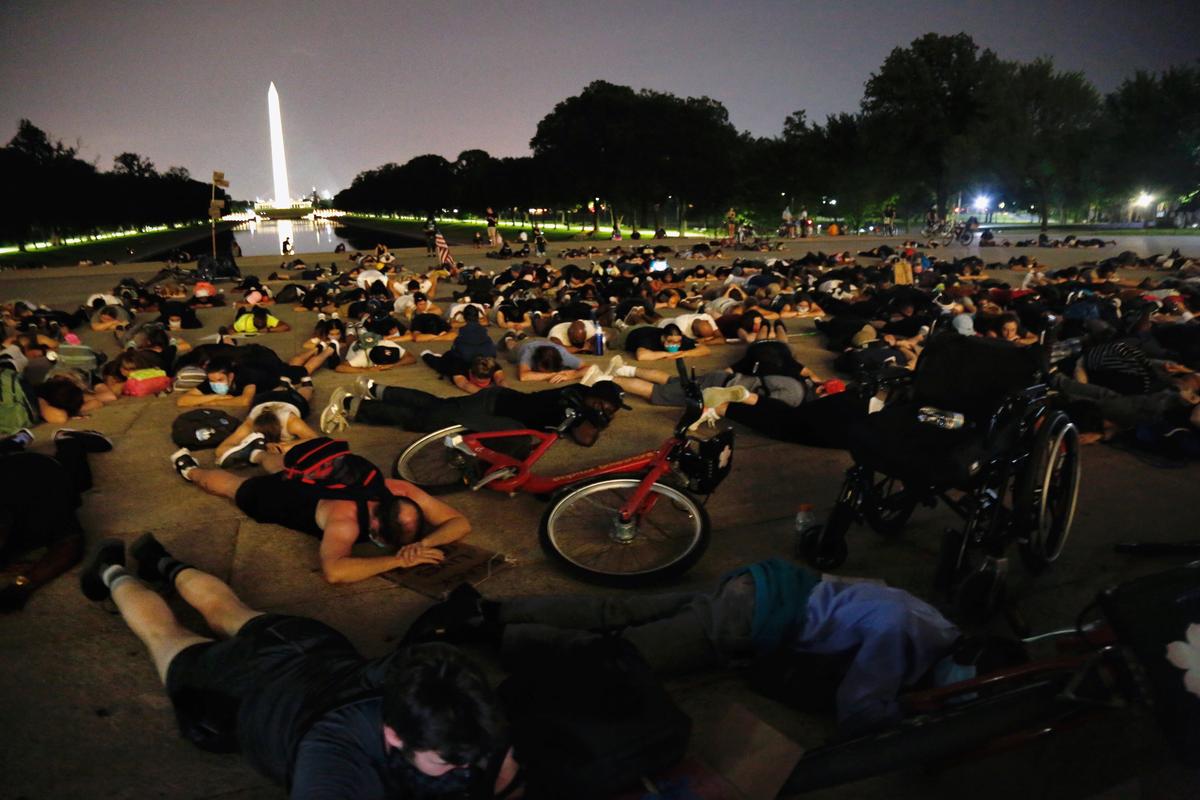 WASHINGTON/LOS ANGELES (Reuters) – Demonstrations were planned across the United States on Sunday to demand racial justice after George Floyd’s death in Minneapolis police custody, with weekend rallies spreading to smaller communities including an east Texas town once a haven for the Ku Klux Klan.

The U.S. marches also inspired anti-racism protests around the globe, as demonstrators from Brisbane and Sydney in Australia to London, Paris and other European cities embraced the Black Lives Matter message.

In Washington, tens of thousands of people chanting “I can’t breathe” and “Hands up, don’t shoot” rallied at the Lincoln Memorial then marched to the White House on Saturday in the biggest protest yet during 12 days of demonstrations across the United States since Floyd died.

A common message of the day was a determination to transform outrage generated by Floyd’s death last month into a broader movement seeking far-reaching reforms to the U.S. criminal justice system and its treatment of minorities.

“It feels like I get to be a part of history and a part of people who are trying to change the world for everyone,” said Jamilah Muahyman, a Washington resident protesting near the White House.

The gatherings in Washington and dozens of other U.S. cities and towns – urban and rural alike – were also notable for a generally lower level of tension and discord than was seen during much of the preceding week.

There were sporadic instances in some cities of protesters trying to block traffic. And police in riot gear used flash-bang grenades in a confrontation with demonstrators in Seattle.

But largely it was the most peaceful day of protests since video footage emerged showing Floyd, an unarmed black man in handcuffs, lying face down on a Minneapolis street on May 25 as a white police officer knelt on his neck for nearly nine minutes.

The video sparked an outpouring of rage as protests in Minneapolis spread to other cities, punctuated by episodes of arson, looting and vandalism that authorities and activists blamed largely on outside agitators and criminals.

National Guard troops were activated in several states, and police resorted to heavy-handed tactics in some cities as they sought to enforce curfews imposed to quell civil disturbances, which in turn galvanized demonstrators even further.

Demonstrators lie down during a protest against racial inequality in the aftermath of the death in Minneapolis police custody of George Floyd at the Lincoln Memorial in Washington, U.S., June 6, 2020. REUTERS/Joey Roulette

The intensity of protests over the past week began to ebb on Wednesday after prosecutors in Minneapolis had arrested all four police officers implicated in Floyd’s death. Derek Chauvin, the officer seen pinning Floyd to the ground as Floyd repeatedly groaned “I can’t breathe” was charged with second-degree murder.

Still, anger in Minneapolis remained intense. The city’s mayor ran a gauntlet of angry, jeering protesters on Saturday after telling them he opposed their demands for de-funding the city police department.

Graphic: Weapons of Control: What U.S. police are using to corral, subdue and disperse demonstrators – here

PROTESTERS IN A RURAL TEXAS TOWN

Perhaps nowhere was the evolving, multi-racial dimension of the protests more evident than in the small, east Texas town of Vidor, one of hundreds of American communities known decades ago as “sundown towns” because blacks were unwelcome after dark.

Elsewhere in the South, in Floyd’s birthplace of Raeford, North Carolina, hundreds lined up at a church to pay their respects during a public viewing of his body prior to a private memorial service for family members.

Floyd’s funeral is scheduled for Tuesday in Houston, where he lived before relocating to the Minneapolis area.