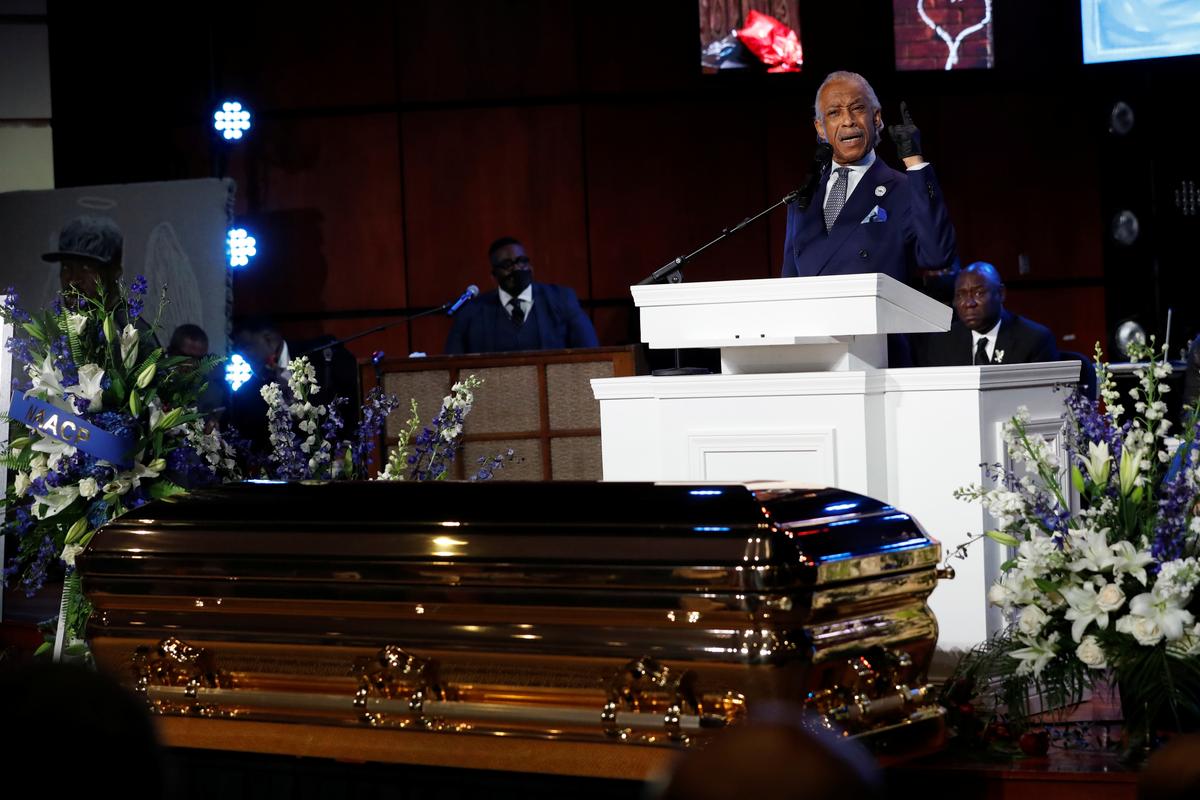 MINNEAPOLIS (Reuters) – Prominent civil rights activist the Rev. Al Sharpton told mourners on Thursday George Floyd’s fatal encounter with police and the nationwide protests his death ignited marked a reckoning for America over race and justice, demanding, “Get your knee off our necks.”

Memorial tributes to Floyd in Minneapolis, where he was killed on May 25, and in New York City’s borough of Brooklyn, a major flashpoint for demonstrations stirred by his death, came as protesters returned to the streets of several U.S. cities for a 10th straight day, including Atlanta, Washington D.C., Denver, Detroit and Los Angeles.

The gatherings, while boisterous at times, were for the most part orderly, in contrast to several previous nights punctuated by sporadic arson, looting and clashes between protesters and police.

The change in mood reflected a determination voiced by many protesters and organizers in recent days to transform outrage over Floyd’s death into a renewed civil rights movement, seeking reforms to America’s criminal justice system.

“This is a very seismic moment, and someday I’m going to have a kid, and he or she or they are going to ask me what I did during the uprising of 2020, during the American spring,” said Nana Mensah, a writer in her 30s from Brooklyn.

She held a sign that read: “You’re lucky we just want equality and not revenge.”

In the nation’s capital on Thursday, hundreds if not thousands assembled for a rally at the Lincoln Memorial, many sitting on the ground listening to speakers and chanting, “Say his name – George Floyd,” before an evening thunderstorm dispersed the crowd.

A separate group of protesters congregated near the White House, where construction workers were seen erecting new concrete barriers and fences around the presidential residence.

Delivering the eulogy at a memorial service inside a university chapel in Minneapolis, Sharpton said Floyd’s fate – dying at the hands of police, pinned to the ground under the knee of a white officer – symbolized a universal experience of police brutality for African Americans.

“George Floyd should not be among the deceased. He did not die of common health conditions. He died of a common American criminal justice malfunction,” Sharpton said. “It’s time for us to stand up in George’s name and say, ‘Get your knee off our necks.’”

Sharpton led mourners in eight minutes and 46 seconds of silence, the amount of time Floyd lay on a Minneapolis street with a knee pressed into his neck.

In addition to hundreds who gathered inside the North Central University chapel, a crowd of hundreds more clustered outside under trees and in window sills, listening to the service broadcast over loudspeakers.

One was Zsa-Vona Williams, 36, who knew Floyd from his days working at the homeless shelter where she once lived, recalling him as a caring, friendly soul.

“He gave to and fed a lot of people. He was a gentle, peaceful person,” Williams said, adding that in death, “He has changed the world.”

The prayer service, which drew comic actors Kevin Hart and Tiffany Haddish as well as U.S. Senator Amy Klobuchar of Minnesota, coincided with a separate outdoor memorial tribute to Floyd in Brooklyn.

The day of remembrance capped more than a week of largely peaceful but raucous protests, accompanied by civil unrest that prompted dozens of cities to impose overnight curfews and the mobilization of the National Guard in several states.

The size and scope of disturbances seemed to ebb after prosecutors in Minneapolis on Wednesday elevated murder charges against one police officer jailed last week in Floyd’s May 25 death and arrested three others accused of aiding and abetting the first.

On Thursday, the three newly arrested officers made their first appearance in court and were ordered to remain held on $750,000 bond each.

Their principal co-defendant, Derek Chauvin, 44, is slated to appear for his bond hearing on Monday. Chauvin is the officer seen in video footage kneeling on Floyd’s neck as Floyd gasped for air and repeatedly groaned, “I can’t breathe,” before passing out.

The four former officers, all dismissed from the Minneapolis police department the day after Floyd died, each faces a maximum sentence of 40 years in prison if convicted of the most serious charges against them.

Floyd, a Houston native who had worked security for various nightclubs, was unarmed when taken into custody outside a corner market where an employee had reported to police that a man matching his description tried to pay for cigarettes with a counterfeit bill.

His brother, Terrence Floyd, joined an outdoor memorial on Thursday in a Brooklyn park where many in the crowd knelt in the grass in the afternoon sunshine in a symbol of protest and chanted, “No justice, no peace.”

He urged the crowd to continue to seek justice but to avoid violence, saying, “My brother wasn’t about that.”

New York Mayor Bill de Blasio took the stage to pledge that Floyd’s death would lead to substantive changes in police practices in the nation’s largest city, and called for greater interracial empathy.

“All of us who know white privilege, we need to do more, because we don’t even fully recognize the daily pain that the racism in this society causes,” he said.

De Blasio, who drew scorn for suggesting protesters were to blame after a police cruiser drove into a group of demonstrators last week, was booed and heckled by many in Thursday’s crowd

His wife, Chirlane McCray, who is black and is the mother of their two children, said Floyd’s killing was a reminder of the fear that black families in the country endure on a daily basis.”We fear for their lives, and we also fear for their ability to live with dignity,” she said.

A string of memorial services for Floyd were expected to stretch across six days and three states, including memorials in North Carolina and Houston. A funeral was planned for Tuesday.

State of the Union 2023: Who is the designated survivor?
US tracking suspected Chinese surveillance balloon
Turkey earthquake: Bodies in street after quake as anger grows over aid
Alleged spy balloon over US is weather device – China
Britishvolt: UK battery start-up set to be bought by Australian firm