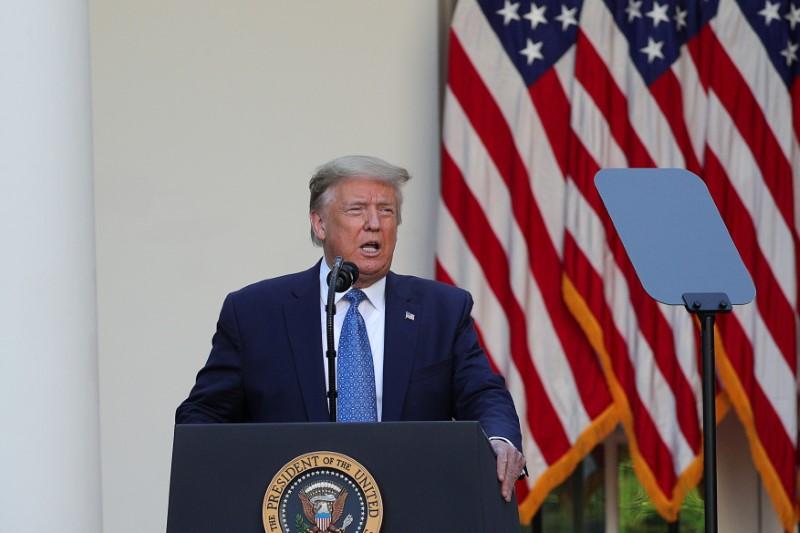 FILE PHOTO: U.S. President Donald Trump delivers a statement on the ongoing protests over racial inequality in the wake of the death of George Floyd while in Minneapolis police custody, in the Rose Garden at the White House in Washington, U.S., June 1, 2020. REUTERS/Tom Brenner

WASHINGTON (Reuters) – U.S. President Donald Trump met with his top campaign advisers on Thursday amid polls showing his tumbling prospects for re-election as the U.S. economy suffers from a global pandemic and protesters gather in cities across the country.

Trump was described by one source as frustrated as he struggles to respond to a crushing set of problems, most recently mass protests resulting from the death last week in police custody of African American man George Floyd in Minneapolis.

A raft of public polls showed Biden with a lead nationally and more importantly, ahead of Trump in some of the battleground states where the Nov. 3 election will be decided.

Trump has pushed a law-and-order theme in the wake of protests that grew violent last weekend. He has called Floyd’s death a “grave tragedy” and said he respected the rights of peaceful protesters. But he has faced criticism for not showing more empathy and a way forward for improving race relations.

He and his top aides have discussed Trump holding some listening sessions with African American leaders. So far Trump has held back on making an Oval Office address as some advisers have suggested.