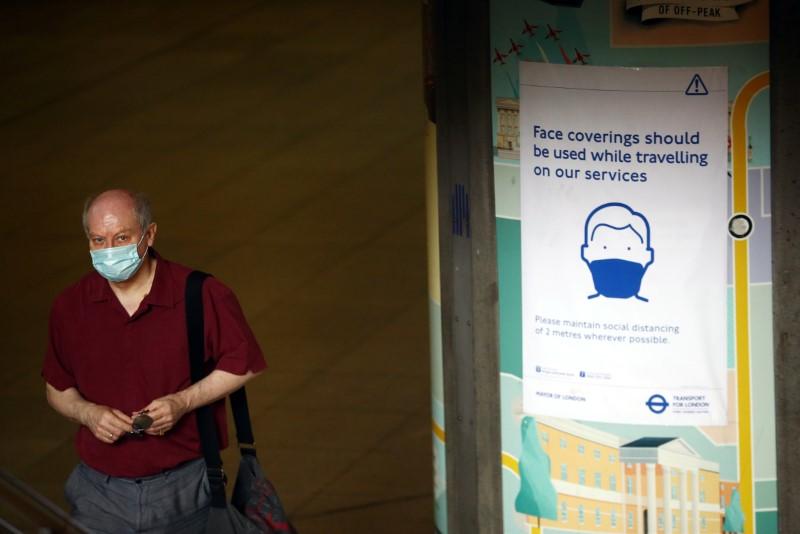 LONDON (Reuters) – Face coverings will be compulsory for passengers on buses, trains, aircraft and ferries in England from June 15, as public transport use rises following the relaxation of coronavirus restrictions, transport minister Grant Shapps said on Thursday.

Britain’s government has been reluctant to mandate the widespread use of face masks or coverings so far, but Shapps said the benefits were clearer on public transport, where social distancing is harder.

“The evidence suggests that wearing face coverings offers some, albeit limited, protection, against the spread of the virus,” he told a daily COVID-19 news conference.

“That doesn’t mean surgical masks, which we must keep for clinical settings, it means the kind of face covering you can easily make at home,” he added.

Since the lockdown began on March 23, the government has told people to avoid non-essential use of public transport. While car traffic is back to almost three quarters of pre-lockdown levels, trains are currently only 10% full and buses outside London are running at about 20% capacity.

However, usage is expected to rise as more people return to work in the coming weeks.

The change was welcomed by transport workers’ unions and scientific experts.

“The evidence for the use of face masks or face coverings has been accumulating and it is now widely accepted that … they can contribute to decreasing the risk of transmission in the community,” said Sian Griffiths, a retired professor who chaired Hong Kong’s SARS inquiry.

People without face coverings will not be allowed to board public transport and will potentially face fines, though small children and people with disabilities or breathing difficulties will be exempt.

The rule only applies in England, though Shapps said he expected authorities in Scotland, Wales and Northern Ireland to take similar action.