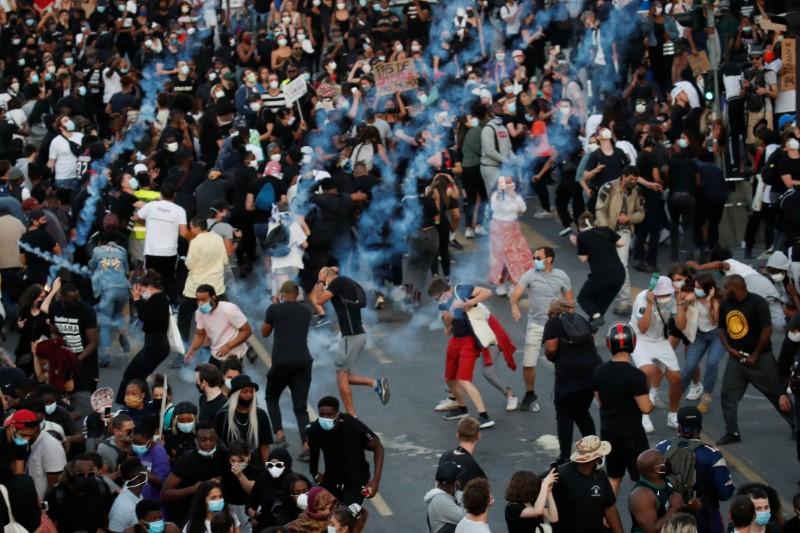 FILE PHOTO: People run from tear gas as they attend a banned demonstration planned in memory of Adama Traore, a 24-year old black Frenchman who died in a 2016 police operation which some have likened to the death of George Floyd in the United States, in front of courthouse in Paris, France June 2, 2020. REUTERS/Gonzalo Fuentes

PARIS (Reuters) – French police fired tear gas early on Wednesday to disperse protesters marking the 2016 death of a black man in a police operation that some have likened to the death of George Floyd in the United States.

Reuters reporters saw police use tear gas after some of the protesters started fires and set up barricades around the Avenue de Clichy in northern Paris, which was littered with rubbish and broken glass.

Thousands of people assembled earlier for a demonstration in memory of Adama Traore, a 24-year-old black Frenchman who died in a 2016 police operation.

The protesters were defying a police ban imposed because of the risk of disorder and the danger of spreading the novel coronavirus.

The demonstration had drawn attention on social media of people supporting the “Black Lives Matter” movement and those backing U.S. protests in response to the May 25 killing in Minneapolis of Floyd, a 46-year-old African American who died after a white policeman pinned his neck under a knee for nearly nine minutes.

Traore’s family blamed excessive force during his arrest, when he was pinned down by three gendarmes. Successive pathology reports have reached conflicting conclusions over whether his death two hours later resulted from asphyxiation or other factors including pre-existing conditions.