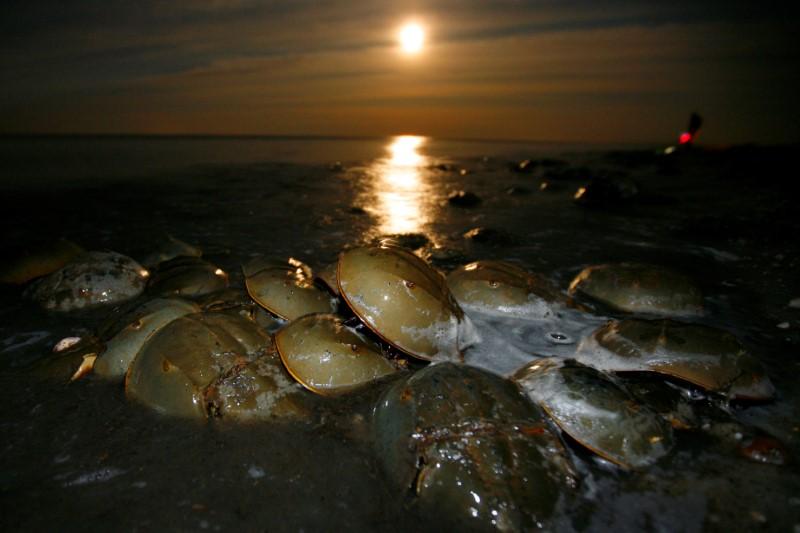 ZURICH (Reuters) – Wildlife advocates are pushing drugmakers to curb their use of horseshoe crab blood by switching to a synthetic alternative for safety tests, including those needed before a COVID-19 vaccine can be used for humans.

Every year, fishermen net hundreds of thousands of the creatures off the U.S. East Coast and Asia before their prized milky-blue blood is drained for use in medical safety tests that detect bacterial contamination in intravenous drugs and implants.

The National Audubon Society, Defenders of Wildlife and other groups called for greater use of a man-made option, called recombinant Factor C (rFC), in a statement released on Monday by umbrella organization the Horseshoe Crab Recovery Coalition.

They say this shift could save 100,000 horseshoe crabs annually on the U.S. East Coast alone and help threatened migratory birds that depend on crab eggs for survival.

However the testing industry’s impact on the U.S. crab population is disputed, with varying estimates for post-bleeding mortality. Swiss biotech firm Lonza, a leader in the field, said good stewardship had led to “stable to increasing” populations.

So far, just two drugs, both from Eli Lily, have been approved after relying on rFC for final endotoxin tests.

The wildlife groups pledged to target legislators and regulators to spur action.

“It is unfortunate that biomedical research still relies on the harvesting of a vulnerable wild animal population when there is a simple, effective, sustainable replacement,” said Ryan Phelan, a campaigner with California-based conservation group Revive & Restore.

Horseshoe crabs’ copper-rich blood has helped the species survive for 450 million years – and made it a source of one of the drug industry’s most unusual raw materials because it clots in the presence of bacterial endotoxins.

Drained from live crabs, the blood has long been the standard to detect contamination in shots, infusions and medical devices.

Companies including Lonza and Charles River Laboratories are the biggest crab bleeders, supplying many of the 70 million annual endotoxin tests in a roughly $1 billion market.

More recently man-made rFC, from Lonza and others like France’s bioMerieux, has emerged an alternative, and they have been pushing to gain market share, though Charles River has opposed recognition, sparking an industry battle. [nL8N24K3WA]

Adoption has lagged, in part, because drug regulators have demanded that rFC endotoxin tests require extra validations, which can add time and cost.

That’s likely to continue, with U.S. industry standards organization U.S. Pharmacopeia (USP) saying on Friday it was ditching plans to put rFC on equal footing with the crab-blood tests, on the grounds that more data was needed. USP’s European counterpart is moving towards recognition, however.

USP did, though, offer to help drugmakers with COVID-19 vaccine candidates should they choose to do their endotoxin testing with rFC, including with free technical assistance from its scientists.

Lonza, however, said even global demand for 5 billion doses of an eventual COVID-19 vaccine would result in just 150,000 additional endotoxin tests and would have minimal impact on crab harvests.

“This is less than a day’s combined production,” a spokeswoman said.